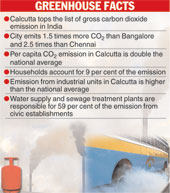 Residential houses and commercial establishments in Calcutta are responsible for more than one-fourth of its carbon dioxide emission, an international study has found out.

Industrial units and vehicles together contribute close to three-fourth of the city’s emission.

The study by the International Council for Local Environmental Initiatives (South Asia), supported by the British high commission in India, is the first attempt in the country to quantify households’ contribution to carbon emission.

Carbon dioxide, a greenhouse gas, is held as the prime culprit for the climate change and the subsequent global warming.

The report — Energy and Carbon Emissions Profiles of 53 South Asian Cities, prepared on the basis of figures for 2007-08 — points out that Calcutta accounts for carbon dioxide emission equivalent to 9.33 million tonnes annually, while the per capita annual emission has been estimated at 1.83 tonnes.

The gross carbon emission of Calcutta is the highest among the 40 Indian cities covered by the study — Delhi, Mumbai and Hyderabad are among the ones left out — while the per capita figure is the fifth highest and about double the national average.

Industrial units in and around Calcutta — responsible for 54 per cent of the emission — top the list of the city’s carbon contributors. The transport sector comes second with 18 per cent, followed by commercial establishments (19 per cent) and residential buildings (9 per cent), said Emani Kumar, the executive director of the agency that conducted the study.

It’s apparent from the figures that the state pollution control board’s effort to contain carbon dioxide emission from industrial units in and around the city has not achieved the desired results. The report points out that around 30 lakh tonnes of coal and wood are still being burnt in Calcutta annually.

The city’s fleet of vehicles, which includes a large number of old and ill-maintained ones, consumes more than 6 lakh kilolitres of fossil fuel in a year.

The most surprising is the data on the residential sector — around 4.5 million residents of the city consume more than 1,000 million KW of power, 75,000 metric tonnes of LPG and close to 3 lakh kilolitres of kerosene annually.

“The findings are consistent with the ground reality. It is clear that apart from the known sources like industry and transport, we also have to keep in mind the carbon footprint of the residential and commercial sectors,” said Siddhartha Dutta, an environment expert and pro vice-chancellor of Jadavpur University.

A section of experts, however, questions the tag of the “country’s carbon capital” that the city has earned following the study, as the figures of Delhi, Mumbai and Hyderabad were not considered while compiling the list.

A study based on the 2000 data had revealed that Delhi’s per capita emission was higher than that of Calcutta. “Delhi and Mumbai are more energy intensive cities than Calcutta. Had the two more prosperous metros been taken into consideration in the latest study, Calcutta might have come third,” said Debal Roy, the chief environment officer in the Bengal government.

Fergus Aul, the first secretary (climate change and energy) in the British high commission, said: “We hope the information will be used by the respective agencies.”