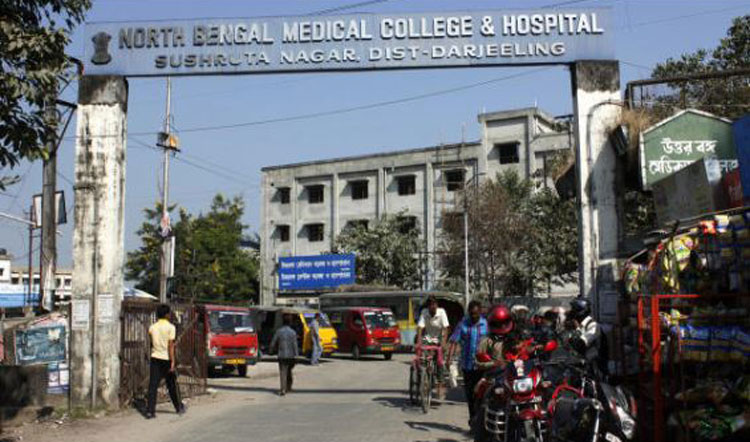 The outpatient departments of government hospitals in north Bengal, especially in Siliguri and Malda, took a hit on Wednesday because of the ceasework by junior doctors.

Hundreds of patients had to return from the OPDs as junior doctors refrained from duties and joined demonstrations to protest the assault on their colleagues at the NRS Medical College and Hospital in Calcutta on Monday night.

Even surgeries had to be deferred because of a shortage of doctors.

At the North Bengal Medical College and Hospital, on the outskirts of Siliguri, more than 200 junior doctors and interns joined the agitation in front of the emergency department.

“At least 225 junior doctors and interns took part in the agitation. There are 20 OPDs at the NBMCH and eight at the North Bengal Dental College & Hospital,” a junior doctor said.

“All those were close. We want to send a clear message that unless the state ensures the security of junior doctors, we will continue our protests.”

Manjura Khatoon said she had been diagnosed with ulcer in her throat. “When I went to the OPD (at the NBMCH), I found it shut. I was told that doctors would not attend OPDs today (Wednesday).”

Manjura is a resident of Bidhannagar.

Durga Choudhury, a Jalpaiguri resident, who was with her husband who has a liver ailment, said: “We had carried out necessary tests and were here to show the reports to the doctors. But the OPD was closed and none could tell us when we could meet the doctor there.”

Some patients visited the hospital superintendent’s office and aired their grievances.

The junior doctors, however, continued their demonstrations. Near the emergency ward, which is a silence zone, they were found using a sound box and a microphone.

Some residents became agitated and asked how doctors could use the sound box. They blocked Asian Highway 2 for some time and later submitted a memorandum to the police outpost on the medical college premises.

Kousik Samaddar, the NBMCH superintendent, who was at the emergency ward with other senior doctors, monitored the treatment of patients.

“At least 40 doctors have treated patients. Senior doctors have visited the wards and we have tried our best to ensure that services are not disrupted,” Samaddar said.

About the use of sound box by junior doctors, Samaddar was brief in his reaction. “They (doctors) kept the volume low,” he said.

A few eye specialists turned up at Malda Medical College and Hospital but services were discontinued after half an hour as junior doctors urged their seniors to close down the OPD in support of the protest.

Amit Daw, the superintendent, said 170 senior doctors had been engaged to manage the situation. “The emergency ward was functional and some surgeries were done,” he said.

When cops in Englishbazar asked them to speak to the authorities and clear the highway, they moved to the hospital and began demonstrating near the OPD where junior doctors were in a sit-in.

An argument broke out between the two groups.

In the Jalpaiguri district hospital, Debasish Roy, 18, who is from Maynaguri and has a tumour in the throat, could not get his surgery done.

“Doctors were supposed to perform the surgery on Wednesday. He was taken to the operation theatre... we were told that his dress would be changed,” his mother Gunabala said.

“After some time, he returned to the bed and we were told that the surgery would be done later.”