‘Protest will go to villages’ 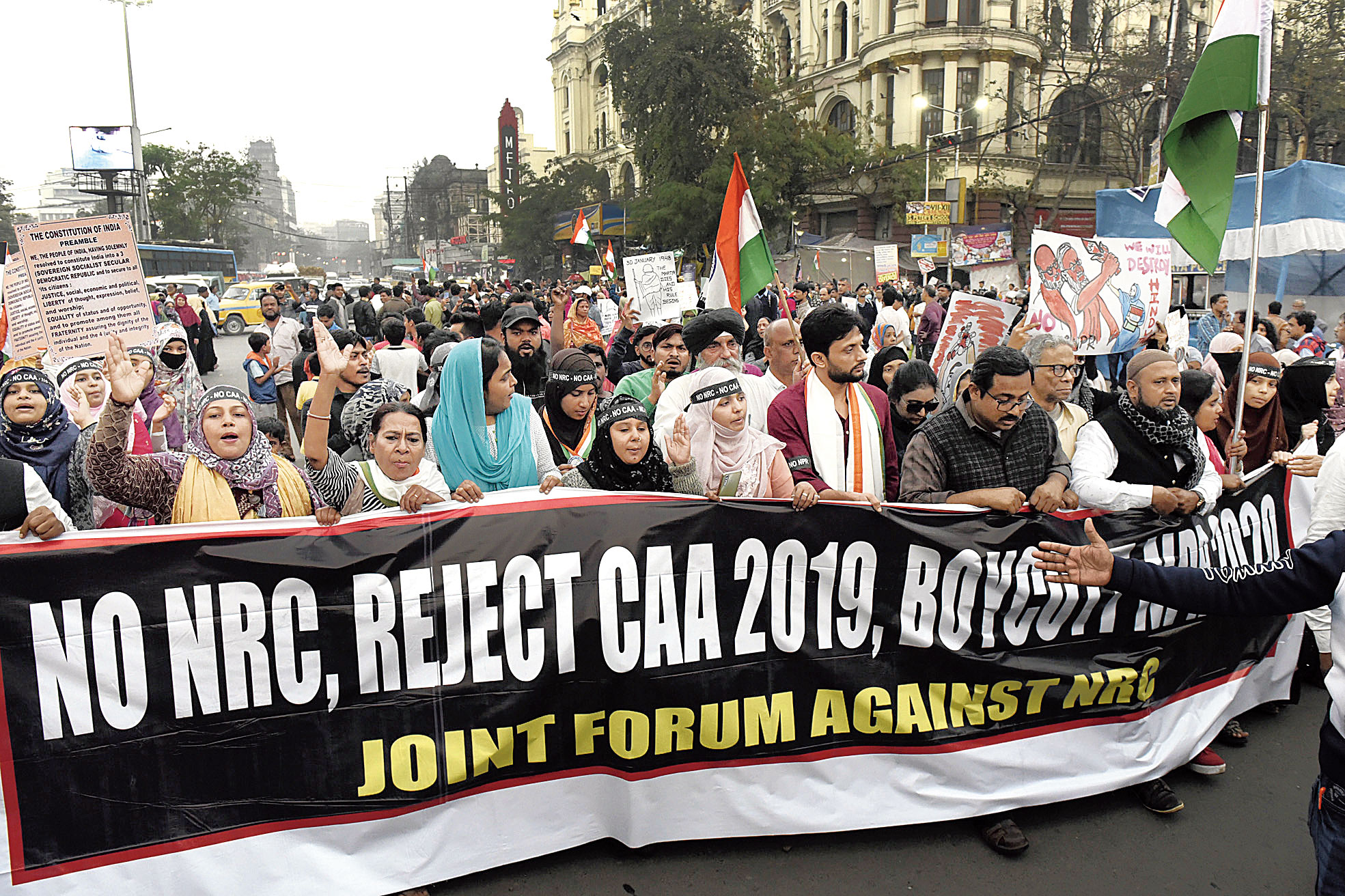 Actor Mohammed Zeeshan Ayyub (in maroon), Prasenjit Bose (to Ayyub’s left) of the Joint Forum Against NRC and others walk towards the Gandhi statue on Mayo Road from the sit-in venue near New Market on Thursday.
Picture by Sanat Kr Sinha
Subhajoy Roy   |   Calcutta   |   Published 30.01.20, 08:07 PM

The sit-in near New Market was withdrawn on Thursday with a call to take the protests against the Citizenship (Amendment) Act, National Register of Citizens and the National Population Register to rural Bengal.

A leader of the Joint Forum Against NRC, which had organised the sit-in, later said the forum would organise a rally in Calcutta in February-end with people from villages in Bengal.

The sit-in against CAA-NRC-NPR had started on January 21.

The fear and panic over the absence of documents is more pronounced in villages and the forum will work to mobilise people against the amended citizenship act, Bose later told Metro.

“The movement has so far remained restricted within Calcutta. But the panic among villagers is far more than what it is in the city. We will go to people in the rural areas and mobilise them against the CAA, NRC and the NPR,” he said. “We will hold a rally again in Calcutta in the latter half of February when many more people from villages will join.”

Close to 1,000 people, a majority of them women, marched from the sit-in venue on Hogg Street to the Gandhi statue on Mayo Road.

Police opened the gates of the park and some of the protesters went inside and stood for a minute in front of Gandhi’s statue. A few shouted: Bapu hum sharminda hain/Tere kaatil zinda hain (Bapu we are ashamed, your assassin is alive). Thursday was the death anniversary of Mahatma Gandhi.

The sit-in venue near New Market on Thursday.
Picture by Sanat Kr Sinha

Afaf Jameel, 52, a schoolteacher, was one of the women in the march. Afaf said she would continue her protests in the coming days.

When asked if she felt there was any hope of a CAA rollback, given the Centre’s firm stand, she said even the British had thought they would never have to leave India.

“When the Congress was formed in 1885, no one expected it to win freedom in two years. Similarly, we know the fight is not going to be easy. The fight will be long, but we will keep protesting till the government rolls back the law,” she said.

Sarah Reaz, 22, a college student, and Shazia Nausheen, 26, a research scholar, were part of the protest.

“If the government can say they will not roll back the CAA, we can also say we will not stop our protests. Let us see who wins,” Sarah said.

Sardar Sukhnandan Singh Ahluwalia, a resident of Alipore, was in the march. Singh said he had joined protest rallies “when BJP leader and home minister Amit Shah had given the call of one-nation-one-language”.

“They are trying to destroy the diversity of our nation. Why will citizenship be granted on the basis of religion?” he asked.

Other leaders of the forum urged the protesters to educate people in their localities on why the Citizenship (Amendment) Act should be opposed. “All of you have to act as leaders and spread the protest in your neighbourhoods. The fight continues,” one of the leaders said.