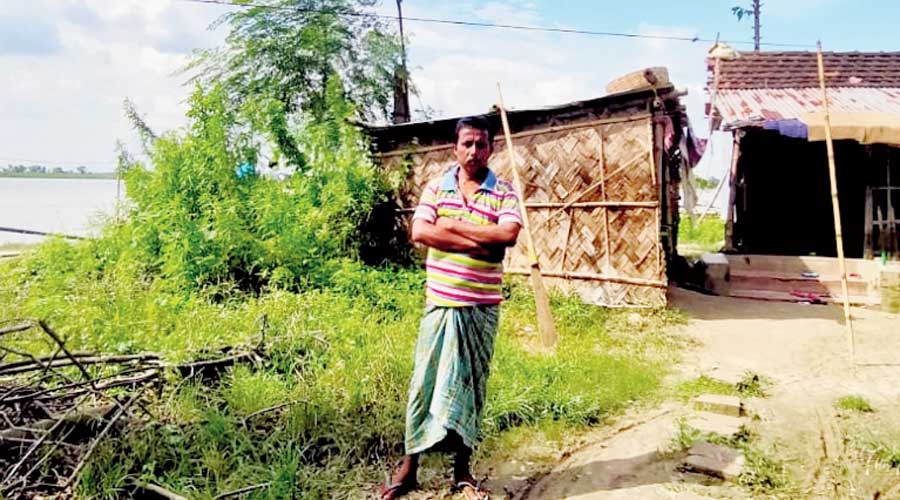 Members of five Scheduled Caste families whose homes were either washed away or face threat from the swirling waters of the Hooghly in Nadia couldn’t settle on the land allotted by the local panchayat because of opposition from upper caste people.

However, a member of the Chanduria 1 gram panchayat run by the Trinamul Congress denied that caste bias had stalled the rehabilitation of the five families belonging to the Dom caste at Mathpara village.

“Our only fault is that we belong to the Dom community,” said Bijoy Chaudhuri, whose house can be gobbled by the Hooghly at Gournagar any time.

As the village is prone to erosion, the Nadia district administration had drawn up a plan last year to rehabilitate 13 families at the nearby Mathpara, which is away from the Hooghly. Both Gournagar and Mathpara are in the Chanduria 1 gram panchayat.

The 13 families were subsequently given government-vested land for living at Mathpara. The river devoured 12 homes and the families moved to the new settlement in March. Although eight families, all belonging to upper castes, could be rehabilitated, four Dom families faced objections from the residents of Mathpara. The four families have been forced to live along a village road in tarpaulin tents since March.

The fifth family of Bijoy and his wife Bina Chaudhuri continues to live on the riverbank as they await rehabilitation. Bijoy is a trolley van driver.

A Mathpara resident who was opposed to the rehabilitation of the Dom families said: “We cannot compromise with our culture and lifestyle. We have asked Trinamul to allot land at a different place for the Dom people to avoid any conflict.”

Dom is listed as a Scheduled Caste in Bengal and its members are generally known as corpse burners. But members of all the five Dom families at Gournagar are into other occupations. According to the 2011 Census, 10.7 per cent of the country’s SC population lives in Bengal.

Admitting that caste bias had come in the way of the resettlement of the five families at Mathpara, Nadia zilla parishad member and Trinamul’s Chakdah block president Tibrajyoti Das said: “I was shocked to learn about the objections raised by some people. In 2020 Bengal, such a mindset is unacceptable. The incident is inhuman. I am against such discrimination and will convince the people to come out of such mindset.”

The panchayat authorities pressed a pause button on the resettlement of the Dom families as a section of the locality’s upper caste residents remained adamant.

Asked what the administration had done to ensure that the Dom families did not face ostracism, Kalyani subdivisional officer Dhiman Barai said: “I had sent Chakdah BDO Debjit Dutta to Gournagar to conduct an inquiry. He spoke to the residents. We will take up the matter with the land department and do whatever is necessary to rehabilitate the families.”

Sociologist Surajit Mukhopadhyay has said though caste bias doesn’t exist in Bengal in absolute terms, it would be wrong to perceive that it is not prevalent.

“That perception of caste does not exist in Bengal is a myth that always gets torn apart when the society is faced with exigencies like the one in Nadia. Yes, it is not of the kind that exists in the cow-belt states. Caste is a primordial affiliation in India that has political utility, like racism is in the enlightened West. ”

Kalpana Chowdhury, a member of one of the isolated families, said: “I had heard caste hatred existed outside Bengal, but never imagined that we could become victims of such discrimination.”

“My husband Gurudas and I run a tea stall where people from various classes and communities come. They are never bothered about our caste,” she added.

Gurudas said he had been issued the patta (land deed) at Mathpara, but the local Trinamul leadership had ignored his plight.

Denying the charge of caste bias, Minati Biswas, a Trinamul member at Chanduria 1 gram panchayat, said: “There was no land to accommodate the five families. There is congestion (at Mathpara).”Told that the five families had been allotted land at Mathpara and two of them issued pattas, Biswas declined comments.

Bijoy said he didn’t know where to move since the panchayat officials had expressed their helplessness. “It is all because of our caste. I had appealed to local Trinamul leaders for help, but they didn’t pay heed to our request. They asked us to live on a piece of land under an electric transformer. But we did not move there as it is too dangerous to live there.”

Badal Halder, a Trinamul leader at Gournagar, said: “We don’t have any prejudice over caste.”