Covid: Couple travels from Ayodhya to Bengal for oxygen

They were turned away by six hospitals in their home state, citing a scarcity that CM Adityanath refuses to admit 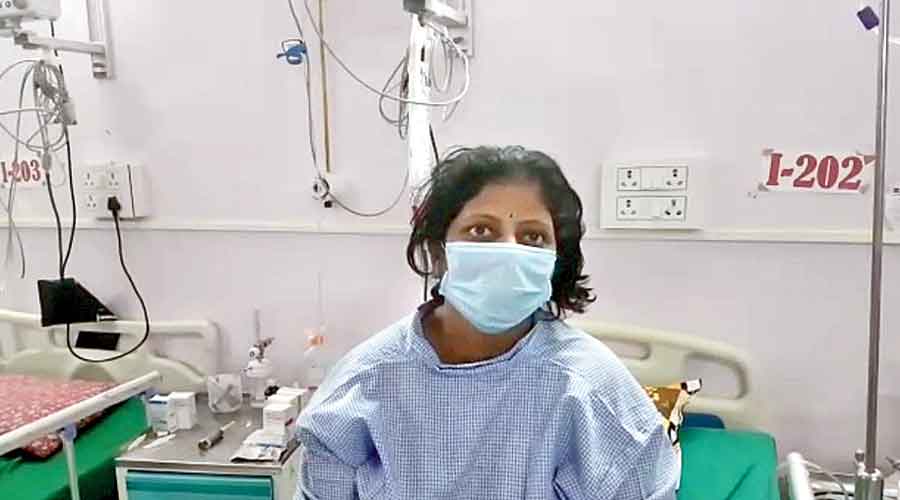 A middle-aged couple from Uttar Pradesh travelled 850km to Bengal and got admitted to a private hospital in Chinsurah after six hospitals turned them away in their home state, citing an oxygen scarcity that chief minister Yogi Adityanath refuses to admit.

The couple are from Ayodhya, the theatre of the BJP’s ascent that is set to have a Ram temple to satisfy the party’s ambitions but whose people, like their peers elsewhere in Uttar Pradesh, find life-saving oxygen hard to come by in a crisis.

Sources said Lalji Yadav, 50, and wife Rekha, 48, had begun their journey from Ayodhya by ambulance on Thursday after relatives in Mogra, Hooghly, advised them to come to Bengal and arranged two hospital beds in nearby Chinsurah.

It was late Friday night when the couple arrived at the Ajanta Seva Sadan Hospital in Chinsurah. Hospital authorities said the patients were “gasping for breath” when they came.

Rekha’s brother Ravi Shankar Yadav, a Mogra resident, cited the incident as a cautionary tale about BJP rule at a time Bengal has just one phase of voting left before the Assembly poll results are announced on May 2.

“I couldn’t have saved my sister and brother-in-law if I were not living in Bengal. I thank the state government and our Didi; our Bengal is far better than Uttar Pradesh,” Ravi Shankar said.

Adityanath has consistently denied an oxygen shortage in his state and accused hospitals that publicise the crisis of “spreading panic”. He has asked his administration to crack down on these hospitals, a senior health official told this newspaper on Monday.

Both Ravi Shankar, a garment trader, and Rekha were brought up in Bengal after their father migrated to the state from Uttar Pradesh. Rekha was married off to Lalji 28 years ago.

Family sources said Lalji and Rekha had had fever and a cough for more than 10 days. They developed severe breathing problems a few days ago despite testing negative for Covid at a health centre.

On Thursday, they informed Ravi Shankar about the scarcity of oxygen and hospital beds in Uttar Pradesh. He immediately asked them to come over and contacted Ajanta Seva Sadan.

“My sister and brother-in-law visited at least six hospitals (in Uttar Pradesh) but none would provide oxygen support to them. But here, in my state, I managed two beds within minutes,” Ravi Shankar said.

“They hired an ambulance at a cost of Rs 60,000 and arrived here on Friday evening, after travelling nearly 24 hours.”

Rekha said from her hospital bed that she and Lalji had “suffered without treatment” in their home state. She said the oxygen was so minimal in the ambulance that the couple had to ration it through their long journey.

“The low oxygen supply in the ambulance led to the deterioration in my husband’s condition,” she said.

Ravi Shankar said: “Bengal is a hundred times better than any other state, including Uttar Pradesh. It’s pathetic that my relatives had to travel 850km by road to Bengal to receive treatment. I want to thank my state government for the infrastructure it has to combat Covid.”

Ravi Shankar cast doubt on the testing process in Uttar Pradesh, too.

“Just think, they were officially Covid-negative in Uttar Pradesh despite the severe symptoms but turned positive when tested in Bengal,” he said.

Rekha said: “We were denied treatment at every hospital we went to and had no option other than coming to Bengal, my mother’s birthplace. We were saved only because we reached Bengal.”

Ajanta Seva Sadan officials said a patient who had earlier been treated for Covid at the hospital had contacted them on Thursday and sought two beds with oxygen facilities. Since the beds were available, the hospital asked that the patients be brought immediately.

“We had no idea that the patients were coming from Uttar Pradesh. Only after they arrived did we learn the entire story,” said Sanjoy Sinha, owner of Ajanta Seva Sadan, a 50-bed Covid hospital.

“It’s pathetic that the couple, who were gasping for breath, had to travel almost 24 hours because their state government failed to provide them oxygen.”

Sinha added: “We are feeling proud to have been able to provide treatment to patients from Uttar Pradesh. We are proud that other states are now depending on Bengal, and we have proved we have good healthcare facilities.”

Ravi Shankar said the only thing he needed now was a single dose of remdesivir for Lalji that the hospital had on Monday asked him to procure amid a countrywide scarcity of the drug.