Paucity of space in the office was the reason behind the apparent violation: Party leader 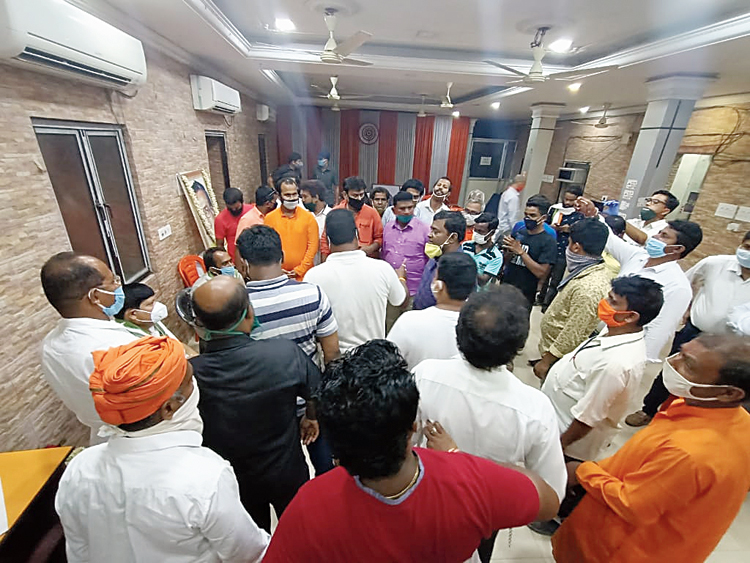 Social distancing norms were flouted when at least 50 people, many of them without masks, jostled in a room of less than 150sqft to congratulate new office-bearers of the BJP at the party’s state headquarters in Calcutta on Tuesday.

The first new functionary to reach the BJP state office at 6 Muralidhar Sen Lane in Calcutta was Dulal Bor. He came around 1pm with a handful of aides to hold a meeting of the party’s Scheduled Caste Morcha that had been handed over to him on Monday.

The moment he entered the meeting room, where news conferences are held, around 50 people followed him in clear violation of social distancing norms.

A few minutes later, Barrackpore MP Arjun Singh entered the meeting room, where people started congratulating him for his selection as one of the 12 state vice-presidents of the BJP.

“People were pushing each other to come close to Singh, who was having a chat with Bor. They were shouting slogans and trying to greet Singh and Bor,” said a source.

When Singh was asked whether he approved of what was happening, he passed the blame on chief minister Mamata Banerjee. “Social distancing is not being maintained in the state. The chief minister herself is flouting the norms,” Singh told The Telegraph.

Asked to cite examples, he couldn’t.

The BJP office erupted again when Saumitra Khan, another MP and Trinamul turncoat, reached. The moment Khan stepped out of his car, a crowd gathered around him and started cheering. He was appointed as the president of the BJP’s youth wing.

A state BJP leader said paucity of space in the office was the reason behind the apparent violation of the social distancing norms.

“The building, which once used to be the office of the Bharatiya Jana Sangh, lacks space. Post-2019, the footfall in this office has grown exponentially… We are already struggling to make enough space for the office-bearers. It is a bit difficult to maintain social distance here,” he said.