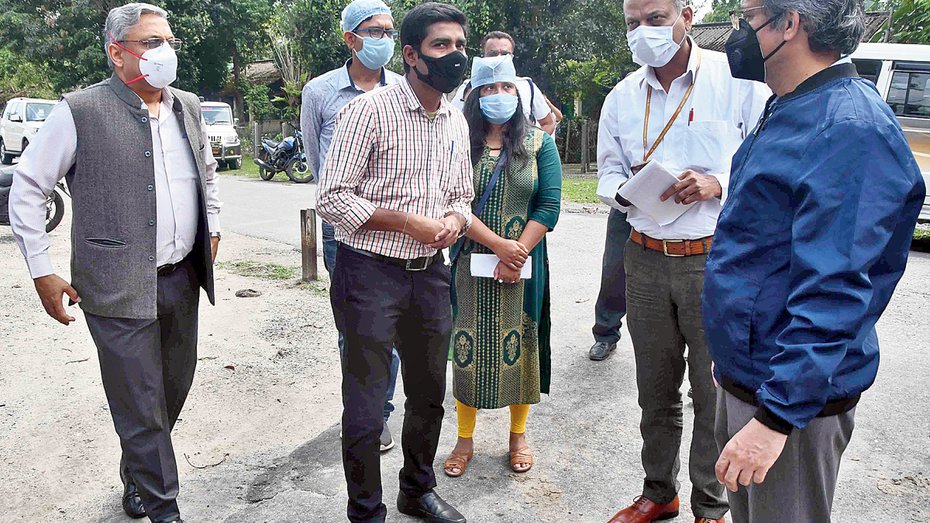 The Bengal government on Friday took a series of steps related to the Covid-19 fight, including addressing concerns linked to transparency about casualties.

Bengal chief secretary Rajiva Sinha said on Friday that a committee had so far audited 57 deaths of Covid-19 patients in the state, out of which 18 had been certified as caused directly by the virus. The remaining 39 persons had severe co-morbid conditions that had been identified as the immediate cause of death and that Covid-19 “was the incidental finding”, Sinha said.

He frowned upon the practice of hospitals demanding Covid-negative certificates before treating other patients, asked that bodies be removed swiftly from wards and Covid-19 test results expedited. Some of these issues have been cited by the Opposition to attack the government that has now chosen to address them.

This is the first time the Bengal government is citing comprehensive numbers to the audit committee and furnishing an explanation on the formation of such a panel, a decision that has been criticised by the Opposition.

The chief secretary shared the statistics with reporters hours after a visiting inter-ministerial central team (IMCT) wrote to the state government seeking an explanation on the committee. The letter has been shared widely on social media, apparently even before it reached the state government.

Sinha denied that the sharing of the details had anything to do with the letter sent to him earlier in the day by Apurva Chandra, additional secretary in the Union ministry of defence who is heading the IMCT sent to south Bengal. The team has sent a copy of the letter to Union home secretary Ajay Bhalla.

Questions on the audit committee had gone unanswered at earlier news conferences. At Friday’s media briefing, Sinha said he wasn’t even aware of the contents of the letter and had passed it on to state health secretary Vivek Kumar as it was related to his department.

“The novel coronavirus deaths, what we report, regarding that, there are various kinds of opinions in various quarters… that we have this arrangement of an expert committee auditing the deaths. First of all, the expert committee auditing the deaths, there are many kinds of reasons. One of them is we want to know how many deaths were actually because of Covid-19,” Sinha said.

“We had yesterday requested the audit committee — which we call the experts’ committee for conducting audit into the deaths of Covid-19-positive patients — that was set up on April 3. Today, we got a report on how many Covid-19-positive deaths they had tested,” he added.

The five-member committee is headed by senior physician B.R. Satpathi, adviser to the state health department, and also includes doctors Plaban Mukherjee, Ashutosh Ghosh, Jyotirmoy Pal and Debashis Bhattacharyya. Bhattacharyya, the director of medical education, is the convener of the committee.

Sinha said the committee had audited all the 57 deaths of Covid-19-positive persons before it and certified 18 deaths as being directly related to the disease.

“The remaining 39 were due to severe co-morbid conditions, which were the immediate cause of death and Covid-19 was the incidental finding,” chief secretary Sinha said.

“We asked them to tell us something about what caused the (39) deaths. The total report they gave to the health department,” he said, before elaborating on what led to these deaths.

Earlier in the day, the IMCT letter had pointed out that Bengal health secretary Kumar had said during a session the central team had with top administrative officials of the state on Thursday that if a Covid-19 patient dies in a road accident, he cannot be said to have died due to the disease.

“The IMCT did not find the reasoning convincing as there is no comparison between a road death and a death in a hospital due to a disease. To understand the issue better… the IMCT seeks to have the following,” wrote Chandra.

He sought details on the following:

* The government order through which the committee had been set up

* The time taken by the committee to arrive at its conclusions

“The IMCT also seeks interaction with this committee to understand their methodology,” Chandra added.

“The Union health secretary had written to us: ‘Patient care should be carefully looked into. It is important that some sort of a death audit be done as we report cases’…. (She) also wrote co-morbidities have to be examined well. ‘We need to institutionalise reporting as this is important as how we proceed to take care of the patients,’” said Sinha.

The chief secretary said Bengal’s audit exercise was not unique and that he decided to report the details of the committee’s findings because the government had been hearing from various quarters the allegation that it was not giving correct facts.

Asked if it was mere coincidence that the details were shared soon after the IMCT letter, Sinha said: “Certainly, certainly. I can guarantee on that, I can vouch for that. I have not even read that letter.”

“I find it very interesting that these IMCT letters being written to me reach you (the media) before they reach me. Where they go from I do not know and I do not have any intention of finding out,” he added.