Cloud on families’ return to Bowbazar 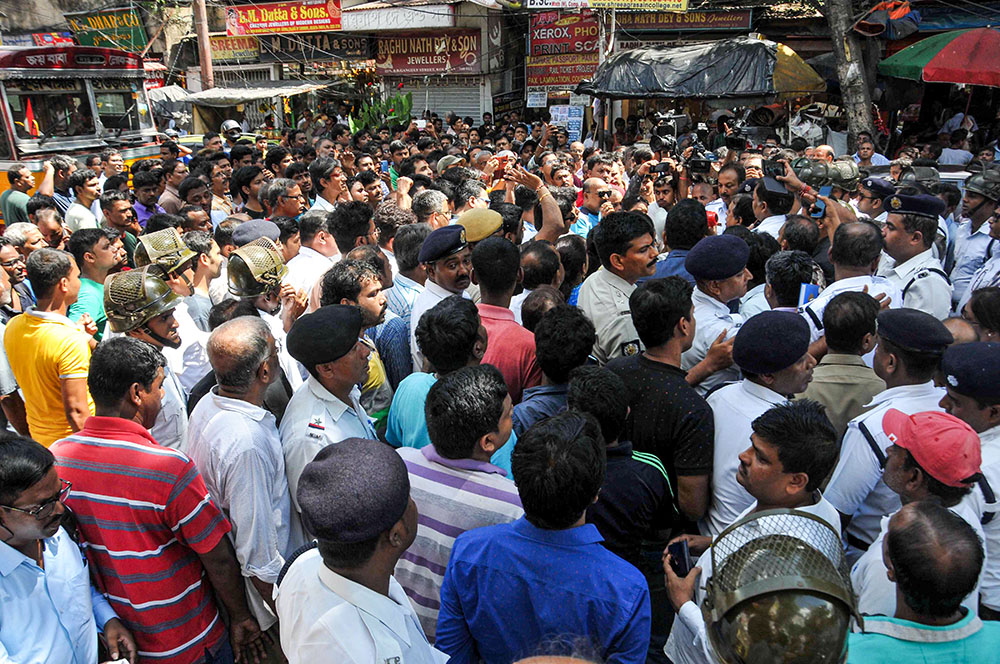 Some of the displaced families in Bowbazar may not be able to return home ever, or at least in the near future, a section of engineers and officials associated with East-West Metro implied.

Hundreds of people had to be shifted from their homes after a machine that was boring the tunnel through which Esplanade-bound trains of East-West Metro will run hit a giant aquifer on Saturday afternoon.

Seepage of water from the aquifer into the tunnel led to huge subsidence, which left many buildings destroyed and hundreds of people displaced.

The Kolkata Metro Rail Corporation (KMRC), the implementing agency of East-West Metro, has arranged for temporary accommodation for the residents of the buildings that have been damaged or have collapsed.

“It will be difficult to rebuild all the houses that have collapsed or are damaged beyond repairs and need to be demolished,” said an engineer of the KMRC.

Which means some of the evacuated families will never be able to return home to Bowbazar or will have to stay away at least in the near future.

The KMRC has agreed to pay a compensation of Rs 5 lakh to each affected family.

The 16.5km East-West Metro will connect Salt Lake Sector V with Howrah Maidan and run under the Hooghly. In the first phase, likely to be operational around Durga Puja, trains will run between Sector V and the Salt Lake stadium.

One of the main concerns of the Metro authorities is how to retrieve the tunnel-boring machine, which has been lying defunct underground since Saturday and is beyond repair, officials said.

“A big rectangular shaft has to be installed to take out the machine. The size of the shaft will depend on the process of retrieval,” said a KMRC official.

“The installation of the shaft and the retrieval of the machine will take more than a year. If the damaged and collapsed houses are to be rebuilt, the shaft will have to be dismantled.”

KMRC officials are wondering whether it is at all possible to retrieve the tunnel-boring machine, given the challenges they will face in installing the shaft in the congested neighbourhood.

“Even if the boring machine is successfully taken out, the authorities have to consider how safe it will be to rebuild the houses adjacent to the epicentre of the underground water seepage,” an official said.

State government officials said KMRC engineers had told them it was possible to rebuild at least some of the houses.

“But at the moment the priority is to stop entry of water into the tunnel, which is causing more subsidence. They are also dealing with rehabilitation and compensation,” a state government official said.

The international experts who have been flown in from various countries are also being consulted on whether rebuilding houses on and around the epicentre is possible.

“Extensive soil tests need to be done to find out whether buildings can be constructed with pilings,” an engineer said. “But that can only be done after the seepage of water is stopped and the rubble removed,” he said.

Another engineer pointed out pilings were usually 15 to 20 metres deep. “Which means it will be difficult to build pilings near the tunnel, which is 15 metres deep,” the engineer said.

Railway sources said there were discussions about compensating the affected residents with “home for home”.

“There are talks about shifting them from hotels to flats. This will be a long-term solution. The houses need not be built on the land where subsidence might continue for years in lesser intensity,” a railway official said. “There are modern techniques to build houses on soft soil.... We have keep in mind the cost, too.”