The three-month-old party, led by Ajoy Edwards, social worker and owner of the iconic Glenary’s restaurant in Darjeeling, walked the election alone 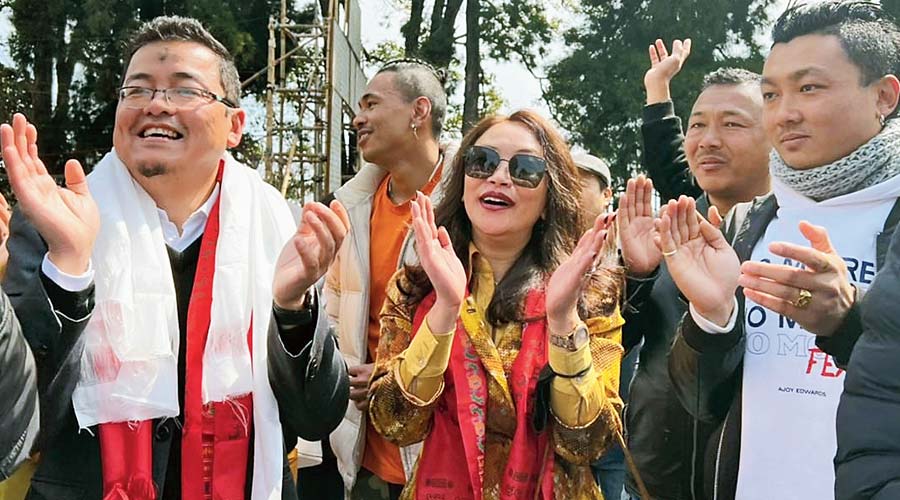 Hamro Party chief Ajoy Edwards (left) is all smiles after the victory in Darjeeling on Wednesday
Telegraph picture
Vivek Chhetri   |   Darjeeling   |   Published 03.03.22, 02:24 AM

The three-month-old Hamro Party bagged the Darjeeling municipality by winning 18 of the 32 wards to push established hill parties to the fringes and mark the start of a new political equation in the hills.

Hamro Party led by Ajoy Edwards, social worker and owner of the iconic Glenary’s restaurant in Darjeeling, walked the election alone, steering clear of Trinamul and the BJP.

The GNLF-BJP alliance, which had comfortably won the last Bengal Assembly elections, drew a blank.

There was a twist in the results, though. Edwards, who did not campaign in his ward 22, however, lost to Bimal Gurung’s candidate Gannay Singh by five votes.

A philosophical Edwards said: “We all ran to help steer our hills on to a new path. We wanted to talk about subjects that we believed needed to be addressed but weren’t. And I believe we have accomplished that. The chair was never the goal. The message was.”

The biggest loser in the election was the BJP-GNLF alliance. Before this, the BJP had not lost one election in Darjeeling since 2009.

Neeraj Zimba, the GNLF leader who was elected as an MLA on a BJP ticket, took responsibility for the civic poll rout. “Zero is a possibility. We can only start afresh…People vote for us (in the Assembly and Lok Sabha elections) when it comes to greater issues of the community (permanent political solution and tribal status) but in the civic election, there has been a change in voting pattern,” he said.

Even Gurung’s performance is considered dismal. Thapa, who was third in Darjeeling civic area during the last Assembly election, managed to improve his performance but could not match Edwards’s acceptance among Darjeeling voters.

Hill leaders including Gurung, Thapa and Trinamul’s Binay Tamang accepted the mandate and promised to “support” Edwards to  run the civic body smoothly.

“We welcome the results of Darjeeling. It marks the initiation of democratic process there. Five (regional) parties contested at the polls in the hills and we have cordial relations with all of them. We have also won some seats. We will see that the GTA elections are being held soon,” Mamata told journalists.

“There is a two-tier panchayat system in the hills. We have asked the Centre to amend the law as it is a central act so that people in hills can get benefits from panchayats. However, the Centre has not acted on it so far,” said the chief minister. A three-tier panchayat exists in the rest of Bengal.