Bogtui massacre: CBI glare on role of firemen in carnage 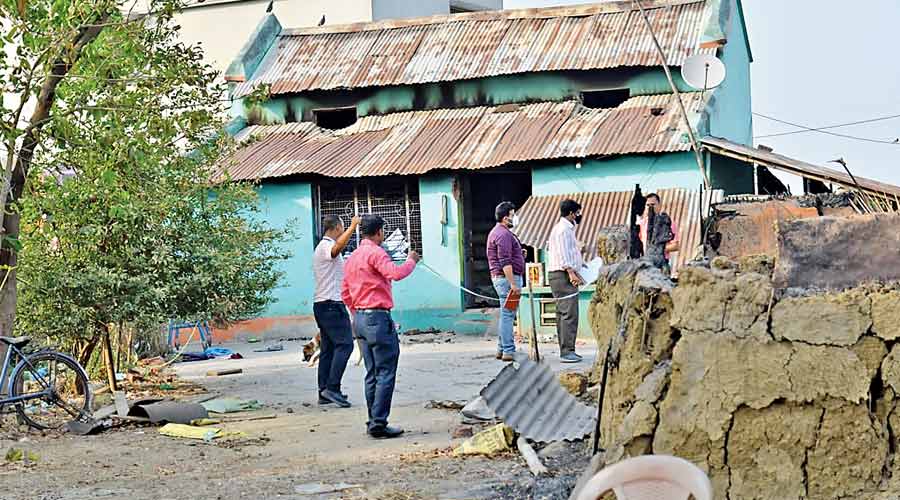 Officials of the CBI and the central public works department at Bogtui on Tuesday
Telegraph picture
Kinsuk Basu   |   Calcutta   |   Published 06.04.22, 02:23 AM

The CBI team has started piecing together strands of evidence collected so far to understand whether firefighters had visited all homes set ablaze on the night of March 21 in Bogtui following the murder of Trinamul leader Bhadu Sheikh, or had left out a few, including that of Sona Sheikh.

Of the nine fatalities of the carnage, seven charred bodies, including Sona’s, were recovered from his home.

Officers of the central investigating agency have learnt Bhadu and Sona were at loggerheads for years and Bogtui villagers were aware of this rivalry over alleged illegal earnings from trucks carrying sand and stone chips. Both had been drivers once. As fortune swung in favour of Bhadu, the chasm between him and Sona kept growing until the fiery end on March 21.

The FIR drawn up at the Rampurhat police station — which now forms the basis of the CBI probe — says “at about 22.25 hrs, the fire brigade personnel of Rampurhat Fire and Emergency Services arrived at the spot. During fire fighting operations, four people were recovered having burn injuries. The fire was anyhow brought under control at about 02.00 hrs.”

The FIR also noted that the fire brigade personnel left the spot after the fire was more or less doused.

“Due to immense heat, it was not possible to get into those burnt houses at that time. However, the search process (operations) for injured and affected persons was continued,” the FIR reads. “On 22.03.22 morning at about 07.10 hrs, the fire brigade personnel again arrived at the village and joined in our search operations. Most of the houses were completely gutted and also were found to have been ransacked.”

CBI officers said the smell of charred bodies is hard to miss and more so for firefighters who must be aware that burning skin has a charcoal-like smell and hair on fire produces a sulphurous odour because of the keratin.

CBI officers said there were a few questions that have remained unanswered till date. These include:

The officers are also not clear that how, on March 22, rescuers could spot several bodies inside Sona’s house, but not see some of the weapons strewn around and later recovered by the CBI team.

“The alleged complicities of several persons behind the massacre can’t be ruled out,” the officer said.