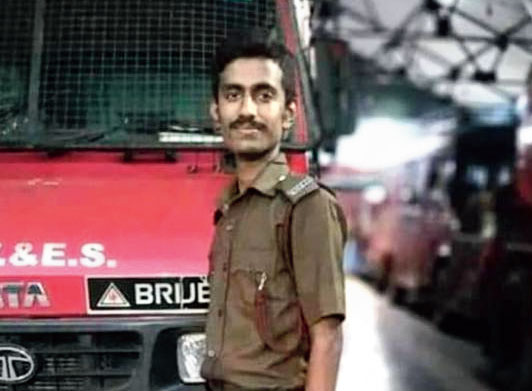 A fireman died after a pole crashed on him when a fire tender with his station officer at the wheel slammed into it while reversing on the Tollygunge fire station premises on Friday afternoon.

Debnarayan Paul, 22, was taken to a hospital near Ganguly Bagan, where he was declared dead.

Police said station master Krishnendu Kundal was driving the fire tender when he suddenly reversed and the vehicle smashed into a badminton net’s pole, which in turn hit Paul on his head.

Kundal was taken to Netajinagar police station after some firemen protested against him outside the hospital where Paul was taken. He was later arrested.

A police officer said it was not clear whether Kundal could drive or why he was at the wheel of the fire tender. Several firemen accused Kundal of being callous and negligent.

“Usually, senior officers do not drive fire tenders. Besides, Kundal does not even know how to drive. We were surprised to see him at the wheel. We were expecting that he would take the vehicle out and so, opened the gate of the station premises. But suddenly, the vehicle backed up and rammed into a pole erected to hold a badminton net. The pole directly hit Debnarayan,” said a firemen who said she saw the accident.

“All these points are subject to investigation. We have informed the family of the deceased. If his parents lodge a complaint, we will start a case,” said an officer of Netajinagar police station.

Paul, a resident of Nimtala Ghat Street in north Calcutta, joined the fire station a year ago, colleagues said.

This was the second fireman’s death in the city within two days. On May 27, Sukanta Singha Roy, 27, was electrocuted in Howrah’s Belur while trying to saw off a tree that had

high tension wires entangled with it. Three CESC technicians were arrested on the charge of negligence that led to Roy’s death.