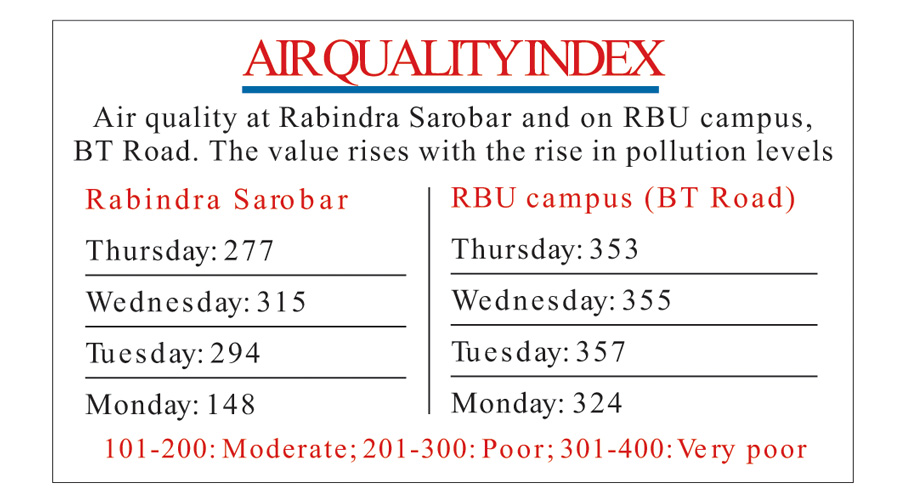 The air quality recorded on the BT Road campus of Rabindra Bharati University has been the worst while that of Rabindra Sarobar has been the best in the city, a study of the last fortnight’s results available on the West Bengal Pollution Control Board’s website revealed.

The contrast was because of uncontrolled truck movement along BT Road and the absence of much human activity inside Rabindra Sarobar, an official of the board said. The air quality recorded at BT Road’s monitoring station has been poorer than other places for years, the official said.

“The air quality remained particularly bad during the night and early morning hours in the station at Rabindra Bharati University. This could be because of the movement of a large number of goods vehicles along the road during this time, when trucks enter Calcutta to unload goods or leave after completing work,” said the WBPCB official.

An assistant commissioner of Calcutta police said that over 10,000 trucks ply along BT Road every day between 12pm and 4pm and between 10pm and 8am the next day.

A study by the National Environmental Engineering Research Institute, conducted between 2017 and 2019, found that goods carriers were responsible for 49 per cent of PM10 and 49.5 per cent of PM2.5 in the ambient air contributed by vehicular emission.

The state government has told the National Green Tribunal that it will phase out commercial vehicles that are 15 years or older. But old and polluting vehicles continue to ply in the city.

“This shows that besides the overall pollution in the region (Calcutta and its surroundings), there are additional local sources of pollution in the vicinity of BT Road contributing to greater pollution in that area. This could be because of the heavy traffic along BT Road or other sources of emission,” said Sagnik Dey, an associate professor at IIT Delhi’s Centre for Atmospheric Sciences.

There is a need to identify the local sources through a survey in the area, said Anumita Roy Chowdhury, the executive director of Centre for Science and Environment.

“It is common for cities to have areas that consistently show more air pollution levels than the general air pollution in the city. There must be a local area action plan to control the additional air pollution contributed by the local sources. This should be in addition to the action plan meant for the entire city or the region,” said Roy Chowdhury.

The board has identified some local units that trade in spare parts of old cars, the WBPCB official said. The trading mostly happens at night and the units burn spare parts which emits a lot of pollutants. “We have requested the police to see that the units do not burn anything,” the official said.

Rabindra Sarobar, in a leafy south Calcutta neighbourhood, has measured better air quality than the other stations. On November 26 and 29, the air quality was “moderate” at the Sarobar station and “poor” at all others. On December 8, it was “poor” while other stations recorded “very poor” air quality.