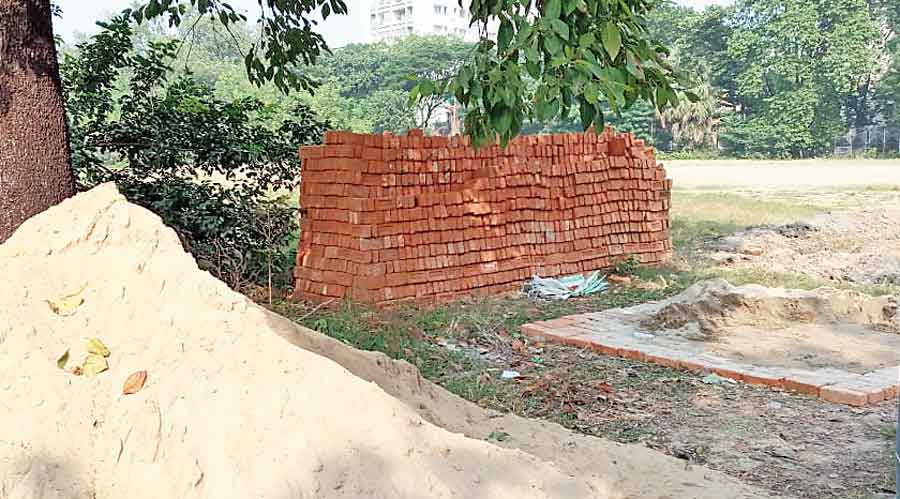 Construction materials at the site inside Vivekananda Park where a Chhath Puja venue was being constructed
Somendra Mohan Ghosh
Subhajoy Roy   |   Calcutta   |   Published 09.11.20, 01:03 AM

The Calcutta Metropolitan Development Authority (CMDA) has stopped for the time being the construction of a Chhath Puja venue inside Vivekananda Park in south Calcutta.

The construction had started on Saturday or Friday, said green activists who have been fighting attempts to allow Chhath rituals at Rabindra Sarobar, which is across the road from the park.

An official of the CMDA said some groups had approached the organisation for permission to build a temporary pool for Chhath Puja, to be held on November 20, at the park. They allegedly did not wait for the CMDA’s decision and started building the pool.

“We have asked them to stop the construction immediately. They cannot construct anything till we give our consent,” the official said.

Another CMDA official, who had visited the construction site, guessed that the pool would measure around 800sq ft.

Asked if the CMDA would allow the construction, the official said: “We have to study the proposal, the kind of materials to be used and other details. A final decision will be taken only after considering all these aspects.

“Prima facie, it seems their intention is not to encroach on any portion of the park. They will dismantle the construction after Chhath Puja. Whether a temporary pool can be built there will need considerable deliberations.”

Vivekananda Park is spread across 1,450 cottahs (about 24 acres). The park is home to several sports academies. There are four grounds divided by paved roads.

Sources in the CMDA, who spoke on the condition of anonymity, said the temporary pool was being made as an alternative to Rabindra Sarobar, in case the rituals are not allowed on the banks of the sprawling water body.

The National Green Tribunal has banned all pujas on the Sarobar premises. The CMDA had approached the tribunal with a plea to allow Chhath Puja at the Sarobar, but the tribunal did not even hear the plea. The CMDA then moved a similar plea in the Supreme Court, where the matter will be heard on November 16.

Activists and environmentalists have argued that people performing Chhath Puja rituals light lamps and release them on the water of Sarobar, an act that affects oxygen diffusion of the lake and aquatic beings. Also, the beating of drums and bursting of firecrackers during the rituals scare away birds.

Somendra Mohan Ghosh, a green activist, went to inspect the construction site at Vivekananda Park on Sunday. “A lot of space at the park has been encroached on. A park is meant for sporting activities. A temporary pool should be allowed only if there is a firm commitment that the damaged part of the park will be restored,” he said.

Former Indian cricket team selector Sambaran Banerjee, who runs a cricket academy at Vivekananda Park, said the construction would damage the grass but that would regrow with time. “It depends on what materials they are using for the pool. If brick is being used to lay the base, the regrowth of grass would take more time.

In case of some other materials, the restoration can be done in a week or two,” said Banerjee, who led Bengal to Ranji trophy triumph in 1990.