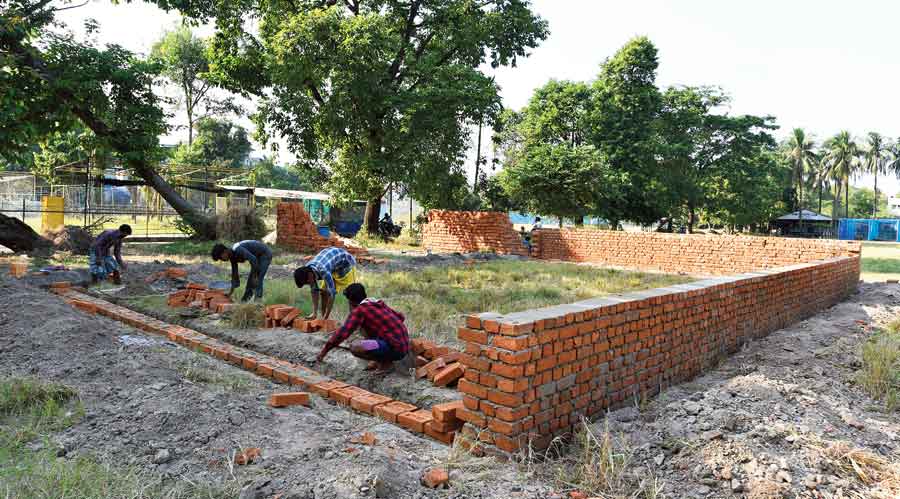 The construction of a temporary pool at Vivekananda Park for Chhath Puja continued on Monday in alleged violation of the Calcutta Metropolitan Development Authority’s (CMDA) order to stop work for the time being.

A local club had written to the CMDA — the custodian of the south Calcutta park — seeking permission to build the pool, but started work without waiting for the consent.

A senior CMDA official told The Telegraph on Monday evening that no permission had been given to the club to go ahead with the construction. “We have not given any permission to anyone to build the pool. Our engineers may visit the site tomorrow and see what is being done,” said the official.

On Sunday, a CMDA official had told this newspaper: “We have to study the proposal, the kind of materials to be used and other details. The final decision will be taken only after considering all these aspects.”

This newspaper visited the park on Monday afternoon and saw that walls about 4ft high had been erected on two sides of the rectangular pool under construction. Four masons were working. A trench about 1.5ft deep had been dug to raise walls on four sides. Grass got buried under the soil dug up from the trenches.

“We have been working since morning. No one stopped us,” said a mason at the site.

“The CMDA should immediately take strong action. Restoration is easier said than done. The organisation building the pool should be charged for restoration if it were allowed to go ahead with the construction,” the environmentalist said.

Sourav Basu, the president of Cockler Lane Tarun Sangha, the club that sought permission for the construction, said the pool was being built as an alternative to Rabindra Sarobar. “If the Supreme Court on November 16 does not allow Chhath Puja at Rabindra Sarobar, where will devotees go?

That is why we are making the temporary pool,” said Basu, who is also the president of Ward 86 Trinamul Congress.

Chhath Puja is on November 20.

Asked why the construction was started without the CMDA’s permission, Basu said: “We cannot wait for so long to start the construction. I have informed the CMDA, police and the CMC about the proposal to build the pool. We will restore the park once Chhath Puja is over…. The permission was communicated verbally to us on Monday evening.”

The National Green Tribunal has banned all pujas at the Sarobar. The CMDA had approached the tribunal with a plea to allow Chhath Puja at the Sarobar, but the tribunal did not even hear the plea. The CMDA then moved a similar plea in the Supreme Court, where the matter will be heard on November 16.

Vivekananda Park is spread across 3 acres, said a CMDA official. Metro had erroneously reported on Monday that the park measured 24 acres.

The park is home to several sports academies.

A CMC engineer experienced in maintaining Calcutta’s parks said soil without any concrete should be used to fill the trench. “Water should be sprayed to make it slushy. New grass should be sown. The grass has to grow and cut twice before it can be said that the portion has been restored,” the engineer said.

Blocks of Mexican grass, which are costlier, can be used for faster restoration, he said.