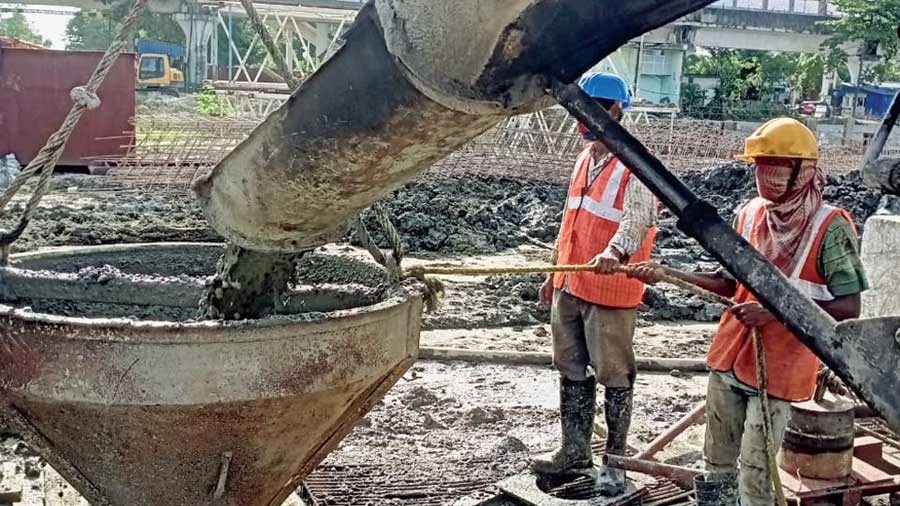 The construction of an underground passenger corridor connecting the upcoming Airport Metro station and Jessore Road started on Wednesday.

An underground Metro Railway station connected to three lines — Airport-New Garia, Airport-Noapara and Airport-Barasat — is being built on the airport premises, around 150m from the integrated terminal.

Two subways will be built from the station — one leading to the terminal and another to Jessore Road.

“On September 16, construction of subway connectivity between the underground airport station and Jessore Road (NH35) started. After construction of temporary guide walls, soil is being excavated for the diaphragm wall. The diaphragm wall panel is 1m wide and 5m long. Its depth is 18.5m,” said Metro spokesperson Indrani Banerjee.

“Work is running round the clock under the supervision of senior engineers. It is being executed by maintaining all safety precautions and measures for Covid-19.”

In the intervening night of Wednesday and Thursday, a giant crane drilled the guide walls beneath the earth, aided by scores of workers.

The corridor between Jessore Road and the Airport station will be around 280m long, 10.4m wide and 4.5m deep. The construction is expected to be completed within eight to nine months, said a Metro engineer.

The distance has to be covered on foot, unlike the proposed corridor till the airport terminal. There will be a corridor with walkalators for passengers to reach the terminal from the station, the official said. Counters for luggage check-in could be set up at the station and there might be a dedicated corridor for transporting the luggage to the boarding point, said airport officials.

The airport authorities will build the entry to the terminal for the Metro passengers.

The corridor to reach Jessore Road will be longer than the one leading to the airport terminal, officials said. “There will be passenger entry/exit points on either side of the road near gate 2.5 of the airport,” an official said.

The station at the airport will have five platforms, a concourse level and an underground railway yard, which will be Calcutta’s first. The platforms will be at 12m below the ground and the concourse level at 6m, said Metro officials.

Advertisement
Crane back to work

Work to remove girders of the abandoned portions of the Circular Railway viaduct beyond Jessore Road, which was an obstacle to the alignment of an underground tunnel for the extension of Metro from Noapara to Barasat via the airport, also resumed on Wednesday.

“After crossing the most crucial portion of VIP Road, the work continued even in the backdrop of the pandemic. But a sudden mechanical failure of the 600MT crane forced the work to halt. After being suspended for nearly two months, work resumed on Wednesday when a girder weighing over 400MT was removed,” said a Metro official.