‘Hathras shows we have failed as a society’ 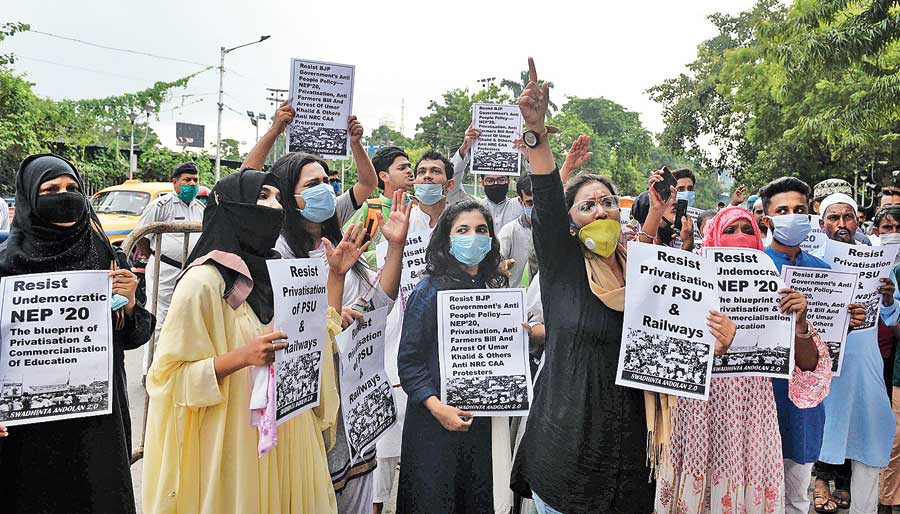 More than 50 women, who were part of the sit-in at Park Circus Maidan against the new citizenship matrix, took to the streets again on Friday to demand justice for the Hathras victim and protest the “unjust acquittal of conspirators” of the Babri Masjid demolition.

“The fact that something as gruesome (as the Hathras barbarity) can take place even after the Nirbhaya rape, which triggered protests across the country, shows we have failed as society,” said Asmat Jamil.

Standing outside Lady Brabourne College, Jamil said she felt “outraged and angered” at the horror of the Hathras gang rape and added that a sense of “insecurity had gripped women everywhere in the country”.

Rashida Afreen, who is pursuing postgraduation in English from Calcutta University, said that while demanding justice for the Hathras victim, they were also raising slogans to demand the unconditional release of rights activist Umar Khalid and others who had joined the protest against the new citizenship regime.

“We shudder to think about the brutality of the assault (on the Hathras victim). And the actions of the authorities in Uttar Pradesh send shivers down our spines. We must act, otherwise women will not be able to even walk around safely anymore,” said Afreen, who lives in Topsia.

The women had gathered in front of Park Circus Maidan and walked till the gate of the college.

Emotions ran high and the participants shouted “Hum sub ek hai. Humaari ek hi mang hai. Hume insaaf chahiye (We are one. We have one demand. We want justice)”.

Jamil said they would continue to organise protest meetings and marches across the city demanding justice for the Hathras victim and rollback of the troika of the Citizenship Amendment Act, National Population Register and National Register of Citizens.

“We will organise these protests with small gatherings keeping in mind the social distancing protocol. We will not rest till justice is delivered,” said Jamil.

Members of a string of organisations that used to be at the forefront of protests against the new citizenship matrix as well as other bodies have called for a rally on Saturday, where people will walk with flaming torches in their hands to protest the atrocities against women and Dalits in Uttar Pradesh.

The rally will start at Park Circus Maidan and terminate at the Gariahat crossing and will wind its way through Old Ballygunge Road and Gariahat Road.

Protesters will start assembling at Park Circus Maidan from 6pm. The organisers said everybody was welcome.