Trinamul Congress is trying hard to maintain its winning streak in the seat, which goes to the polls on Saturday 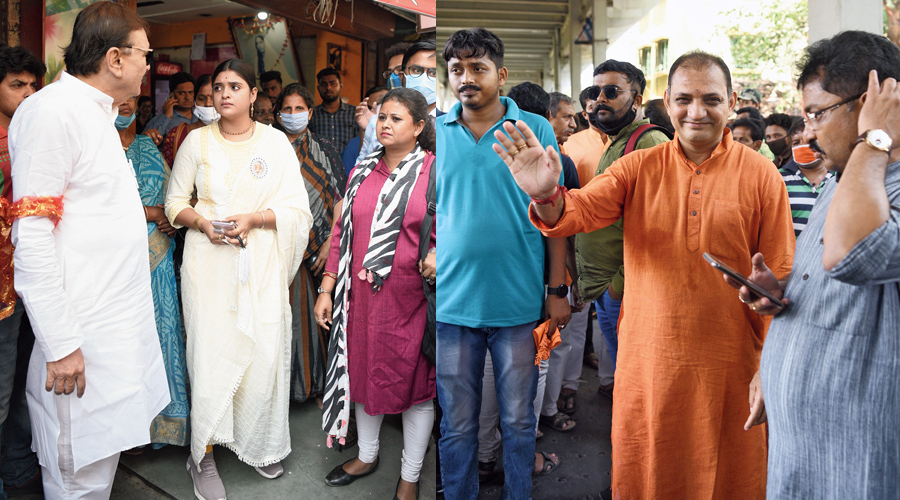 The Kamarhati Assembly constituency, which had been a Left stronghold for several decades, saw a growing support for the BJP in eight years, from about 1,700 votes in 2011 to more than 45,000 in the 2019 Lok Sabha elections.

The Trinamul Congress, which had in 2019 regained the lead it had lost in the 2016 Assembly polls against the CPM, is trying hard to maintain its winning streak in the seat, which goes to the polls on Saturday.

Madan Mitra, who had wrested the seat from the CPM’s Manas Mukherjee in the 2011 Assembly elections, is pitted against the BJP’s Raju Banerjee and the CPM’s young face, Sayandeep Mitra. The constituency, on the northern fringes of Calcutta, has a mixed population.

The Kamarhati Assembly constituency lies on both sides of BT Road. On the west is Dakshineswar, an old neighbourhood along the Hooghly. On the east, there are colonies where residents are mostly settlers from the erstwhile East Pakistan or their descendants.They formed a strong vote bank for the CPM for several decades.

The tables had turned in 2011 when Mamata Banerjee came to power. Madan Mitra had defeated the CPM’s sitting MLA Manas Mukherjee by more than 24,000 votes. Mitra became transport minister in Mamata’s cabinet. The BJP’s Shikha Sarkar had secured 1,699 votes in 2011.

In the 2016 Assembly elections, Mitra, who was fighting the polls from behind bars, lost to the CPM’s Mukherjee by 4,198 votes. The BJP had started making its presence felt as the party’s candidate Krishanu Mitra bagged 10,797 votes. He, however, finished a distant third. Mukherjee got 62,194 votes and Mitra bagged 57,996 votes.

But the CPM’s vote bank started waning and the BJP gained a foothold in the 2019 Lok Sabha elections. The TMC secured a lead of 17,000 votes against the BJP’s Samik Bhattacharya in the Kamarhati Assembly segment, which is part of the Dum Dum Lok Sabha constituency. The BJP had polled 45, 631 votes against the TMC’s 62,356.

The men in the fray

Madan Mitra is contesting for the third consecutive time from the seat. Originally a resident of Bhowanipore, Mitra had shifted to Dakshineswar before the 2011 elections. Apart from the campaigning door to door and addressing street-corner meetings and large rallies, Mitra has taken to social media to further expand his outreach.

“I wanted to connect with the young and first-time voters and the best way to do so is through social media,” said Mitra.

Mitra’s recently released music album “Oh Lovely” has gone viral. It is a song about how politicians are switching from the TMC to the BJP allegedly for personal gains.

“Since February, when I had posted it on YouTube, it has garnered over one lakh views,” Mitra said, smiling. “When I am going out for a campaign, people are asking me to sing and I readily oblige.” He is also doing Facebook Lives to reach out to voters.

Mitra said he was confident of retaining the lead his party had in the Lok Sabha elections. “In 2016, I was part of a conspiracy and I was put behind bars. The jerseys were the same and so were the players. But the captain was missing. This time, the captain will play again,” said Mitra, claiming that his personal popularity in the area and Mamata’s charisma would see them through.

“People are fed up with syndicates and cut-money culture in the land of Dakshineswar Kali temple and Adyapith Kali temple. Once a thriving industrial belt, there are hardly any industrial units here,” said Banerjee, the BJP’s vice-president in Bengal. “Basic amenities like potable water, drainage and good roads are missing,” said Banerjee, who said he grew up in the locality playing football in Belghoria.

The CPM has pitched a new face after a bad show in the 2019 Lok Sabha polls — Sayandeep Mitra is fighting his first poll battle.

“There was a shift towards the BJP during the Lok Sabha elections because some of our supporters and workers felt the saffron brigade was the only alternative to the Trinamul,” said Sayandeep. “The same supporters have now seen the Trinamul candidate of this constituency celebrate Holi with three actor-turned-BJP nominees on board a vessel on the river Hooghly. People have realised that the Left is the only alternative in Kamarhati.”

Once an industrial belt, with factories and jute mills, Kamarhati has a sizeable population of Muslims and Hindi-speaking voters who will play a crucial role this time, said all the three parties. Communal politics, jobs, corruption among councillors, lack of civic amenities and the personal charisma of Madan Mitra, residents say these issues will determine the winner.

“Hindus, Muslims, Bengalis and Hindi-speaking people have been living together for years without any major problem. But this time, the BJP is trying to drive a wedge and we are scared,” said a 65-year-old resident of Kamarhati who did not want to be named.

Civic issues are equally important. “If you talk to people here, you will learn about scarcity of drinking water across parts of Vivekananda Nagar, BL Ghosh Road and May Dibas Pally,” said Arun Chakrabarty, a resident of Culture More in Belghoria, the Assembly’s border in the east.