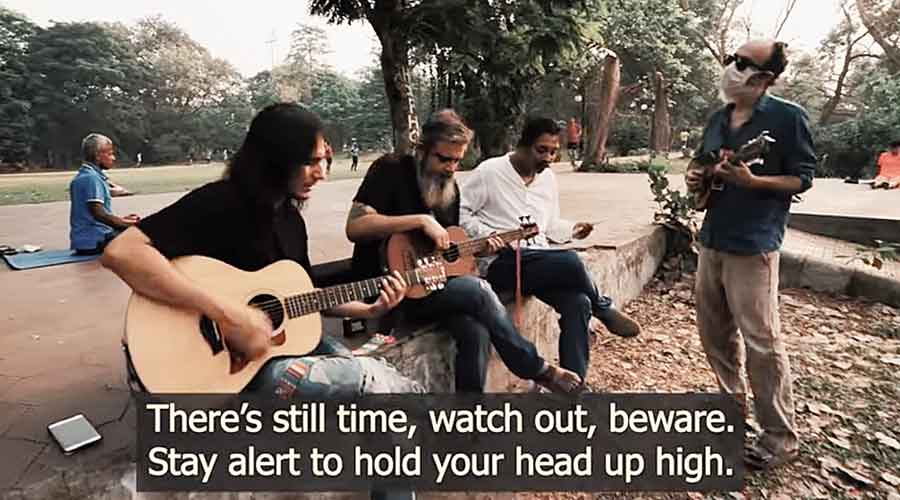 A song by some of the city’s young musicians that was released on Saturday urged voters of Bengal to be “hushiyar (beware)” because the seeds of hatred being sown now, ahead of the elections, could have telling consequences for a long time.

The song begins with the call to remain alert. “Dike dike hao hushiyar rakhte matha uchu/Khal kete kumir ghor e ashche pichu pichu (Watch out! Beware! Stay alert, if you want to hold your head up high/The crocodile has crept into your home, he’s caught you in his eye).”

Swadesh Misra, the songwriter, said that the song is a protest against the communalisation of Bengal’s societal harmony for an election. “I tried to tell listeners what some people who are claiming to make Sonar Bangla did in the rest of the country. Keep that in mind and then vote responsibly,” he said.

The song also talks about how people could lose their citizenship and with it their homes, Misra said. There are the lines: “NRC te fondi kore camp e dhore niye/Naam porichoy jomi jiret nichchhe sab chhiniye (With the NRC (National Register of Citizens) trap, they will herd you to a detention camp/ Names, identities, homes, all snatched away with a “foreigner” stamp)”.

Journalist, writer and filmmaker Paranjoy Guha Thakurta, who is one of the two producers-directors of the music video, wanted the song to send the message that in India, the rights of the minorities needs to be upheld. “The message of the song is anti-communal. The message is that we should respect the wishes and the rights of the minorities. All of us who worked in this video share the view that India should not become a Hindu Rashtra,” said,” “It may sound especially relevant today because of the Bengal elections but it will be relevant even after the elections,” said Guha Thakurta.

Samantak Sinha, the vocalist of the band Fiddler’s Green that sang the song, echoed Guha Thakurta. “The attempt to communalise the society would remain even after the assembly elections are over. This song will not lose relevance after the elections. People will hear this again and again and think about the warnings mentioned in the song,” said Sinha, who also sang a song urging people to not vote for BJP ahead of a rally in the city on March 10 that had the call “No Vote to BJP”.

Fiddler’s Green has a following among the youth. They are a regular in cafes and small addas and they render songs of a variety of genres. The band had also composed a song in May last year highlighting the plight of the migrants who got stuck across the country because of a lockdown that was suddenly announced in wake of the Covid-19 pandemic.

English subtitles accompany the video, perhaps with the aim of catching a wider pan-India audience. One of the comments on You Tube was from a person named Narender Bhardwaj who wrote: “Incredible. Bengal never disappointed me so far Literature, Cinema & music considered…Love you all the team from Haryana”.

But did the band’s members ever feel wary of facing repercussions for taking such a strong stand, did they ever fear losing invitations to perform as a consequence? “No. We have the skills. People have listened to us and loved us. There will not be any problem getting work. We were never bothered about that. Rather, it is true that during our growing up we never thought who is a Hindu, who is a Muslim or who is a Christian. But many people are asking about these identities now,” said Shamik Chatterjee, the bass guitarist and manager of Fiddler’s Green.