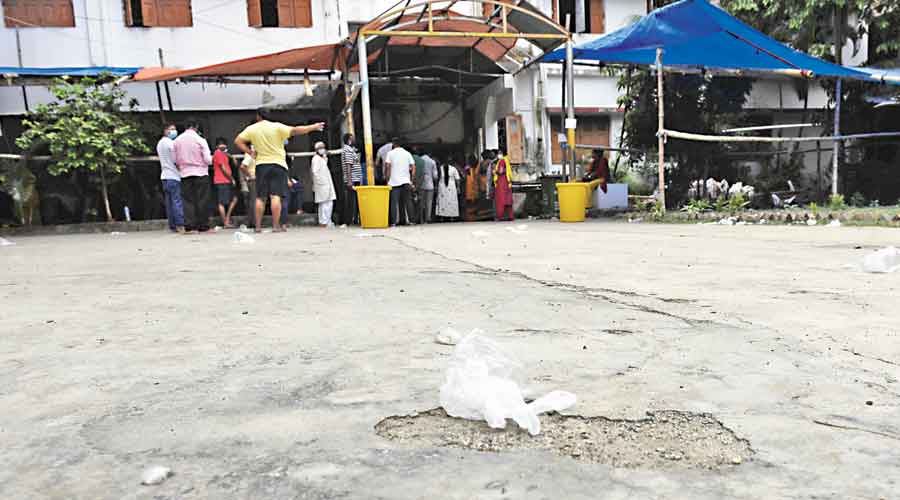 Systems were in place across all polling stations on Saturday but the Covid protocols were not adhered to in almost all of them.

Voters stood shoulder to shoulder in queues and merrily discarded their gloves on the premises of the polling stations or on the road outside though yellow bins had been kept to dispose of the gloves after voting.

All voters were given hand sanitisers and a glove for one hand with which they would press the EVM button to cast their vote. There were personnel deployed to give these to every voter before they entered the polling booth. The personnel also checked the body temperature of voters with a thermal gun.

“No one told me that I have to drop my gloves in a bin inside the polling station,” said a man who had come out wearing the gloves from the Bapujinagar Madhyamik Balika Vidyalaya in Jadavpur. There were piles of gloves lying on the roadside outside the centre.

It was a similar picture in many places. Almost everywhere, some voters came out with the glove in one hand and then took it off. They did not pause before dropping the glove on the road. Outside Kasba’s Ram Narayan Singh Memorial High School, there were piles of gloves on the floor and on the road outside. The entire school premises were littered with gloves.

People also stood at barely 1ft distance from each other in the queue. “There are nine booths in this school. It is very difficult to make people following social distancing rules,” said a paramilitary jawan, who was managing queues. At the Sammilani Teachers Training College in Mukundapur or Santoshpur Vidyamandir for Girls High School too many voters had discarded their gloves on the road outside.

But most voters wore masks while entering the polling station. A few youths were seen standing in the queue at Sammilani Teachers Training College in Mukundapur with masks on their chins.

At this centre, too, there was no social distancing and neither the policemen nor the central forces asked the voters to stand 6ft apart from each other.

The Covid protocol says that people should sanitise or wash their hands frequently, wear masks and maintain at least 6ft distance from each other in a public place.

The Election Commission had made it mandatory for voters to wear gloves while casting their votes.

A doctor said that this was done to ensure that the buttons were not infected. “If someone who is unknowingly carrying the virus on their fingers touched the buttons on the EVM, another person could pick up the virus from there. If the second person touched their nose or eyes with that finger, he/she could get infected with Covid-19,” said a doctor.

The Calcutta Municipal Corporation (CMC) has hired an agency to clear the bio-medical waste from the yellow bins. “We started cleaning the bins around 6.30pm. There are 725 polling stations in six constituencies: Jadavpur, Kasba, Metiabruz, Tollygunge, Behala East and Behala West,” said an official of GreenTech Environ, a waste management company tasked with cleaning the bins.

But an official of the agency said they were not told to pick up the gloves dropped on the floor of the polling stations or on the road outside. These have to be cleared by road cleaners of the CMC.