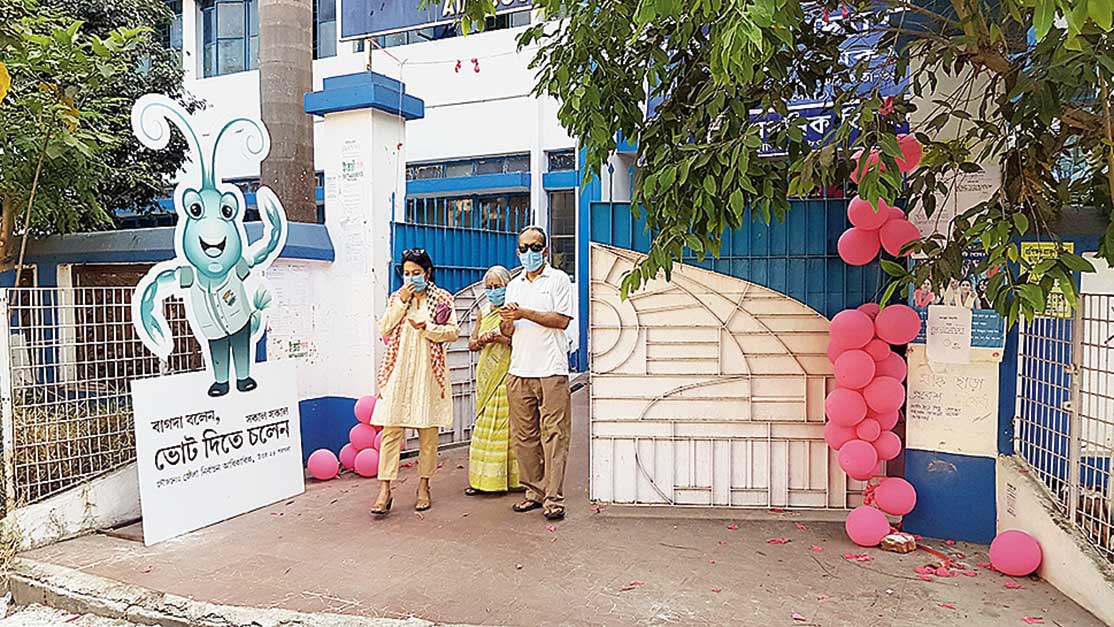 Fifty four polling stations across Salt Lake and 35 across Rajarhat-New Town were manned by, well, women. The presiding officer along with the three polling officers at these centres were exclusively ladies.

A notice issued by the electoral registration officer specified that these booths were chosen only after being certified by the police as being safe and where separate rooms were available after accommodating central armed police forces at the polling premises.

The women performed their duties and went home feeling empowered, although not without suggestions for the next time.

A common issue with all the women spoken to was the mad rush at Bidhannagar College, the distribution centre (DC), where they had to report to pick up and then drop EVM machines and the like.

“They had a special queue for women only for attendance. Otherwise it was common queues to tag our phone numbers, guards, micro observers… My second polling agent was down with fever so it was yet another line to get a substitute,” said Rakhi Ghosh, presiding officer at Bhagabati Devi Balika Vidyalaya in AE Block.

“Everyone wanted to get their work done fast at the DC so there was pushing, jostling, shouting and chaos. Women could not battle it out with the men in those queues. Women need separate queues,” added Chaitali Mondal, presiding officer at Bidhannagar Municipal School in FE Block.

The next issue was the sheer weight of machines like the VVPAT and control unit. “They were too heavy to carry, especially for officials nearing retirement age. And this was besides all the documents and our own luggage that we had to ferry,” said Sucharita Chatterjee, on duty at BD Block’s Bidhannagar Government High School.

The officers had to stay at the booth overnight before polling but Chatterjee’s team preferred not to sleep as the room was under CCTV surveillance and they felt uncomfortable being watched.

Meena Dey, presiding officer at Labony School, said it was impossible for women to wrest open the VVPAT machines at the end of day and remove batteries. Ditto for Anindita Sil, who is still rubbing balm on her sore arms and shoulders after all the heavy lifting. 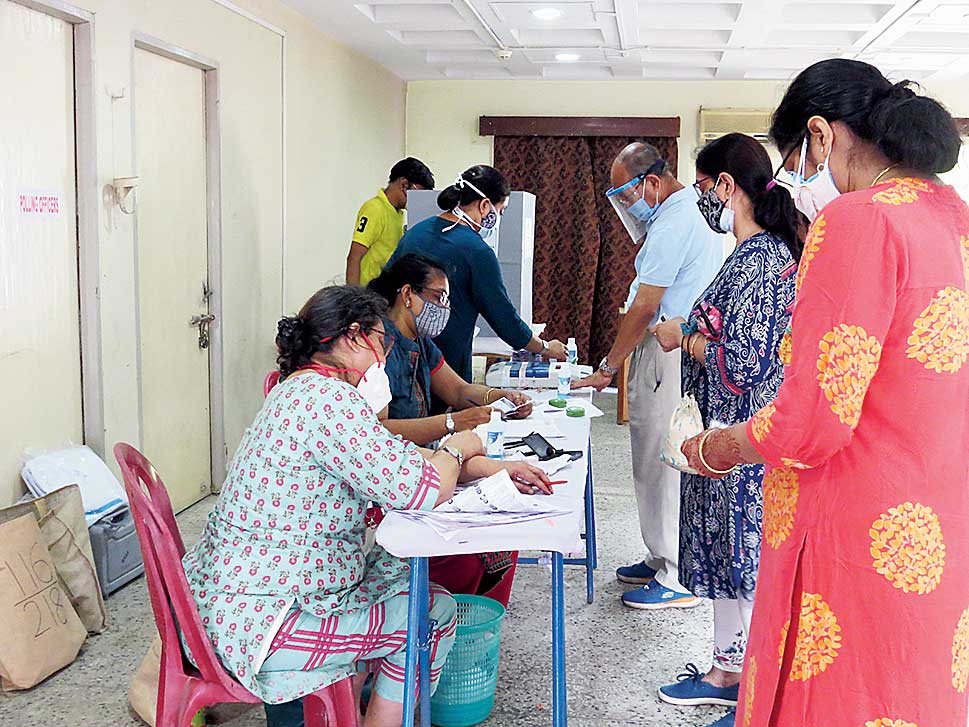 The women appointed for poll duty hold government jobs like those of school teachers and once selected, they were trained a few times for the new role.

“All four officers in my booth, including myself, were pulled out of reserves,” said Aparajita Koner, assigned at Dr APJ Abdul Kalam Government College in New Town. “I suppose the original officers are down with Covid. I still received two training sessions but a team mate had to make do with a single rushed class. Obviously it wasn’t enough and we had to study by ourselves on YouTube.”

Some women were assigned in their own constituency and used election duty certificates (EDC) to vote in their own booths. “I was promised a booth in my constituency but got posted at Dum Dum. I couldn’t vote,” says Sil, who lives in ED Block’s Sourav Abasan.

Many booths were in schools and colleges and so toilets were decent. The ladies had brought biscuits or bought meals but most said they had no time to eat on the big day.

Some women were weary of leaving behind their families and young children for overnight duty. “But that was before I spoke to the CAPF guards who stayed on our premises,” said Chatterjee.

“After the Sitalkuchi incident, we think these forces are brutes but my heart broke to hear that one of them had not managed to take leave in years. When he was home last, his wife was expecting and now he bought a dress for his six-year-old child and was asking if I think it would fit her! I too have a six-year-old son and realised I had no business feeling sad after hearing of these forces’ sacrifice,” she said.

Anima Das broke into laughter when her four-year-old called her up in the midst of a tiring day at the booth. “She had been hearing us talk about how dangerous election duty can be and she wanted to know if I was safe!” said Das, who was posted at the FE Block school.

Transport was available for the women to be dropped home at the end of the day but since most of them live within the constituency, many chose to return home on their own as and when their paper work was completed. 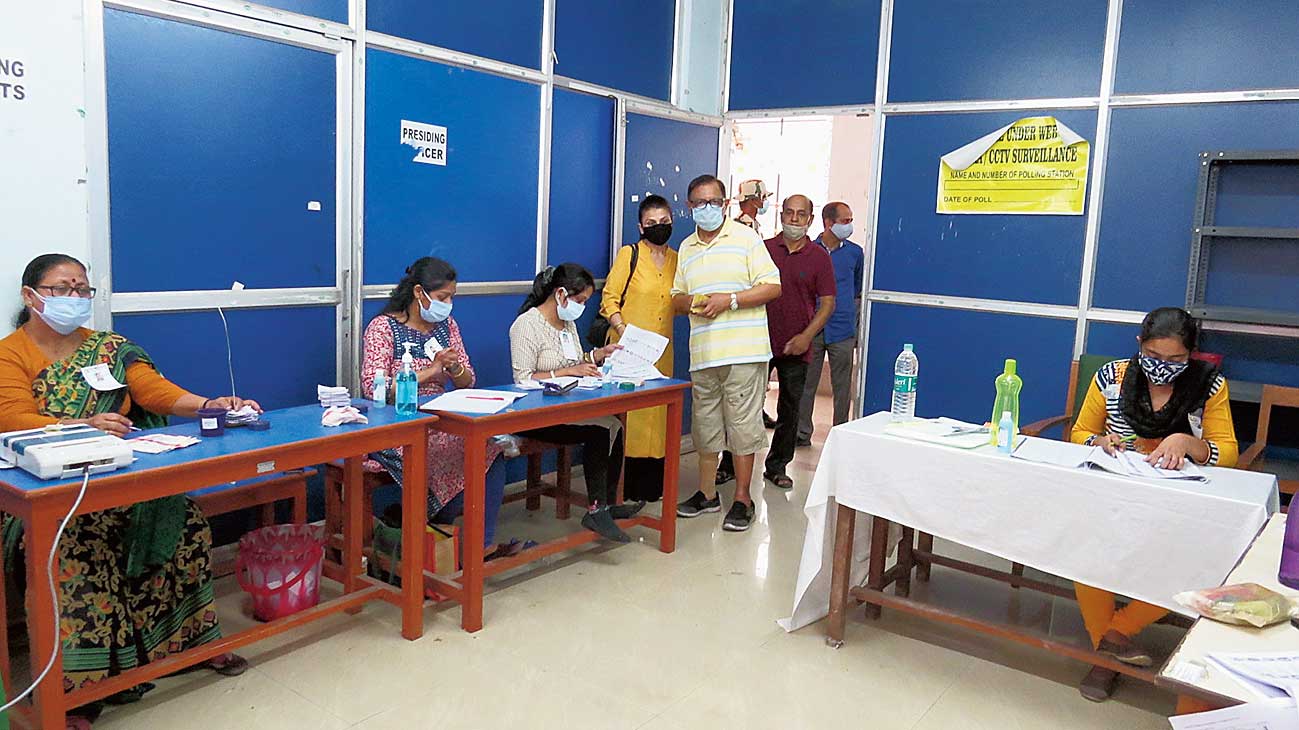 “I noticed my booth was manned solely by women and found them helpful, polite and efficient,” said Babul Chandra Debnath, a voter at Acharya Prafulla Chandra High School for Boys in BK Block.

When an altercation broke out at Chatterjee’s booth about a voter having forgotten to get his I-card, she intervened with utmost kindness. “I was strict about the rule but explained the problem patiently,” she said. At the end of it, the voter said I had been so polite, he couldn’t be mad at me if he tried!”

Mondal created a separate queue for the elderly at her booth when someone requested her and Dey did her best to solve the “EVM in the dark” problem.

Voters across the board complained that the EVMs were placed at rather dark corners that made it difficult to read the candidate’s names. “The EVM malfunctions if placed under bright light. We also couldn’t keep it near a door or window to protect voter privacy. The best I could do was offer my mobile phone’s torch for elderly citizens,” Dey said. 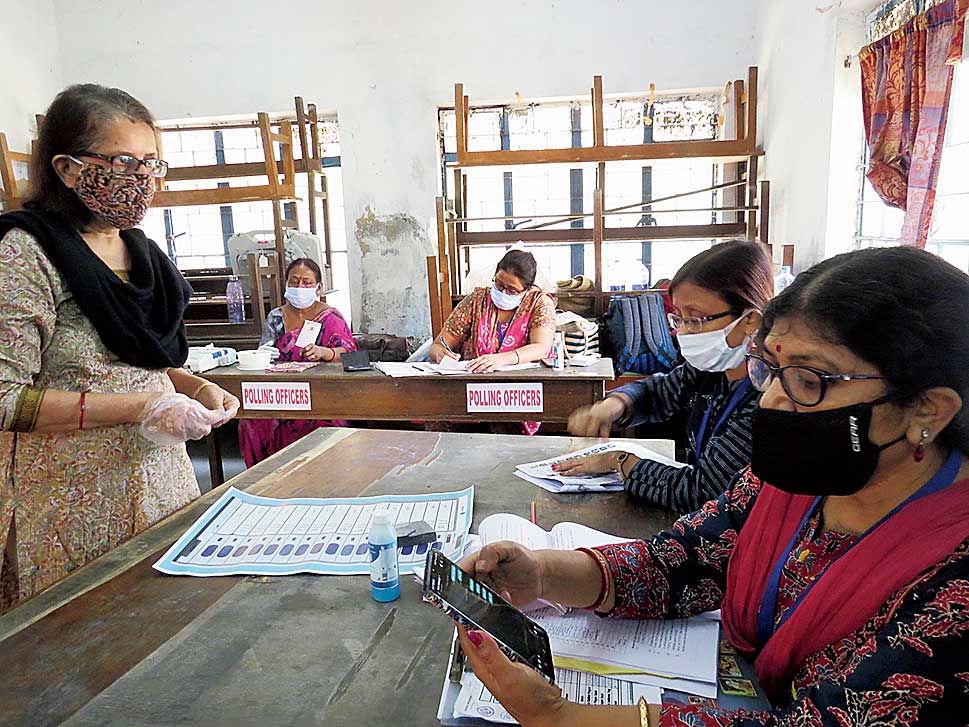 Empowered on the way

Das found some voters wondering out loud if an all-woman team would be up for such a crucial job. “But they were happy seeing us pulling it off,” she smiled.

Chatterjee agrees. “Now that I’ve proved to myself I can undertake a job of such great responsibility, I know I can take on any job. It’s been empowering.”

Das’s was the first all-woman team to complete their paper work and submit their machines at BNC, within two hours after voting stopped. “The authorities were surprised! They didn’t expect women to complete the work to perfection and that too on time. In fact they broke into applause for my team and even clicked our pictures,” smiled Das.

While those like Koner said they had gained from their maiden experience and would put up an even better show next time, some others were reluctant. “It’s not a choice for us, it’s mandatory duty,” said an officer assigned at Salt Lake Point School in CD Block.

Sil suggested that the Election Commission of India recruit employees dedicated to conducting polls around the country. “That would be better than dragging teachers out of their comfort zone and forcing them to perform duties they are neither suited nor prepared for,” she said.