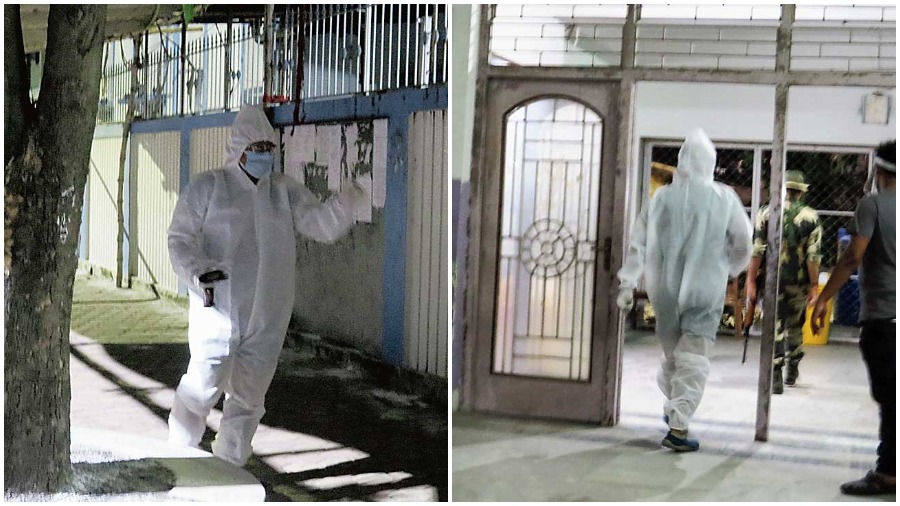 Sourav Chakraborty in PPE kit speaks to the presiding officer from the pavement and finally is allowed in
Sudeshna Banerjee
Sudeshna Banerjee   |   Salt Lake   |   Published 23.04.21, 01:20 AM

Sourav Chakraborty of DL Block learnt of the Election Commission of India’s provision to let Covid positive voters cast their ballot in the final hour of polling and turned up at his polling booth, Sri Aurobindo Institute of Education, all by himself, causing a mini consternation. He shares his voting experience with The Telegraph Salt Lake.

I was ill since April 3. There had been no breathing distress, no fever. But when I started experiencing body ache — it was as if someone was beating me with an iron rod; I could not even lie down at night — I decided to go for a test. The result came positive.

Since then, I was wondering whether I could vote. I got affirmative news on talking to politically active friends and then checked the Election Commission of India guidelines. Though it was not mandated, I placed an order for a PPE kit with a CK Block chemist.

On Saturday afternoon, I put on the kit, that cost me Rs 450, and a faceshield that cost another Rs 200, and set off. Though my house is less than 300m away from the booth, I decided not to create a spectacle of myself by walking the distance and be a target of barking streetdogs. I parked my car and beckoned at a CISF jawan. He heard me out, went inside and asked me to come back at 6.15pm.

Half an hour later, when I stepped out of the car, the jawan called the presiding officer out of the building.  She was quite alarmed to see me. “Apnar ki vote na dilei noy?” she asked. When I pointed out it was my democratic right, she argued that I would infect the balloting unit. I assured her that I had brought a pen along and would press the button with it. I also mentioned that I had a voter slip carrying my serial number and no one needed to be in the room when I voted. Finally she relented.

The polling agents had already left as, being local residents, they knew I was coming. I asked the three polling personnel to move to the farthest corner of the room. But the machine needed to be activated, which one of them did. My identity was not checked, nor was my finger inked. But I had finally cast my vote.