The site is presenting the ‘kheror khata’ in which the director kept detailed notes covering all aspects of the film, from costume sketches to musical notes and dialogues 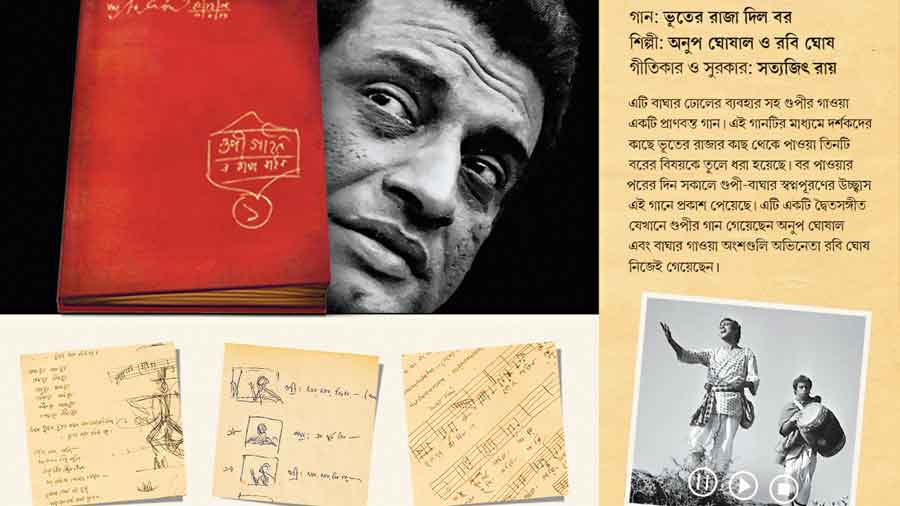 Between the covers of two traditional red cloth-bound notebooks is enclosed the creative process that resulted in one of Satyajit Ray’s landmark films, Goopi Gyne Bagha Byne.

In Ray’s centenary year, a bilingual website, exploreray.org, is presenting the kheror khata in which he kept detailed notes covering all aspects of the film, from costume sketches to musical notes and dialogues. “The first khata has 733 pages of the story line, sketches of the characters and elements of the sets, the shooting script and the story board, all of which he developed over time. The second book has about 200 pages on the dance of the ghosts and post-production work,” said Ayananshu Banerjee, head, projects and digital transformation, TCG-Crest.

The website has been developed by the Centre for New Media, an institute under TCG Crest, which deals with digital entertainment.

This website not only presents the scanned pages but also offers extensive annotations, cross-referenced to the script. Over 500 movie clips, 100-plus images, movie stills and music snippets provide a multi-dimensional experience to Ray fans and researchers alike.

By scrolling the pages, dated from December 25, 1964 to August 21, 1966, one can track how the film developed in the maker’s mind. “When a tune came to his head, he jotted down the notation, sometimes along with snatches of the lyrics. Many were never used. In one case, we found a tune recorded here used years later, in Goopi Bagha Phire Elo,” Banerjee says.

Recordings have been made of piano renditions of the original notations for this project.

The script is in Bengali but to make Ray accessible to the world, translations have been added. “Goopi Gyne… was the first Bengali film to release at Globe cinema. Ray had prepared the English subtitles for the screening. Since his storyboards were heavy with illustrations, there is little verbal description. So we did not have to translate much ourselves,” he points out.

The team also accessed the magazine Sandesh in which Upendrakishore Roychowdhury’s story came out in 1915, serialised over six issues. The pages have been archived here alongside those of the reprint in the Puja edition of the magazine which grandson Satyajit revived as editor in 1961.

Sandip Ray, the principal advisor to the project, said the project had been mooted before the lockdown but work could start only over the year-end. “Father kept two kheror khata for every film but the ones on Goopi Gyne Bagha Byne are rich as the film was special to him. We had showcased some pages during an exhibition organised by Ray Society on the film’s golden jubilee. But this website will provide comprehensive and easy access,” he said, adding that the Shatranj ke Khilari notebooks were next in richness of detail. “We will take a call on whether to take up another film depending on the response this gets,” said Sandip.

Filmmaker Mrinal Sen’s US-based son Kunal, a year junior to Sandip at Patha Bhavan, has offered technical and creative assistance to the project.