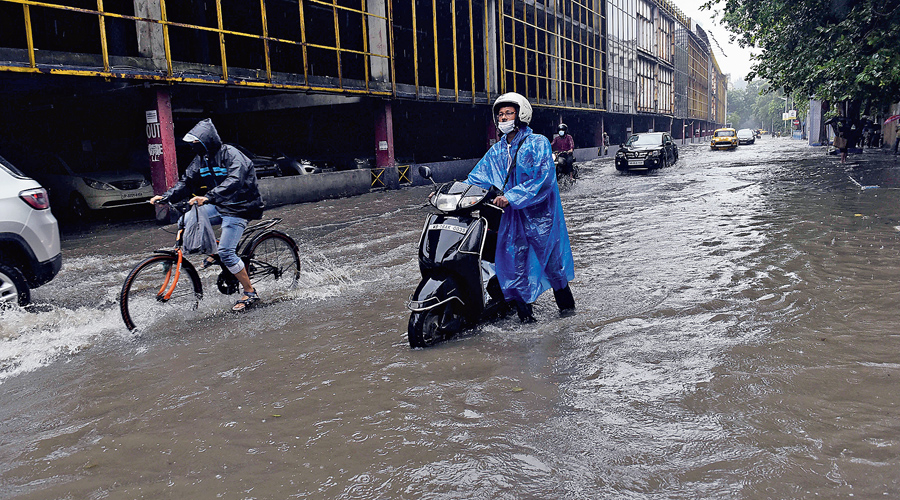 Between Wednesday morning and Thursday morning, the Met office recorded close to 150mm of rain in Alipore, around two-third of which poured through the night.

The city is tipped to be overcast and rainy at least for the next couple of days. “On Friday and Saturday, expect multiple spells of rain. Another spell of heavy rain is not ruled out,” said a Met official.

A cyclonic circulation over Gangetic Bengal and a trough of low pressure extending from Punjab to northeast Bay of Bengal led to the formation of cumulonimbus clouds that triggered the downpour.

“These two strong systems were aided by significant moisture incursion from the Bay of Bengal to lead to the formation of heavy rain-bearing clouds that triggered the downpour,” he added.

The sky has been overcast since Wednesday morning. The city witnessed more than one spell of light rain throughout the day. But the intensity of the showers picked up towards the night.

“It was raining incessantly after midnight. While being dropped home, I got off the pool car on the main road, some 50m from my home, located in a narrow lane. I had an umbrella but the rain was so intense that I got drenched by the time I reached home,” said Madhuparna Chakraborty, who works in the administrative department of a private hospital and lives near Behala police station.

Sk Sufiyan, an app cab driver, is usually on duty through the night. “Yesterday, driving through the rain was extremely difficult, mainly because the showers blocked visibility. I went home around 1am,” said the 29-year-old, who lives in Maheshtala.

“The active monsoon conditions will persist. The two systems are also likely to remain active till at least June 19,” said a Met official.

The weather will start improving once the cyclonic circulation starts moving towards the interiors of Bihar, said the official. Now, it is reasonably static, he said.