Vaccine distribution from today in Calcutta

The doses arrived in 83 special boxes from the Serum Institute of India in Pune, which is manufacturing the vaccine 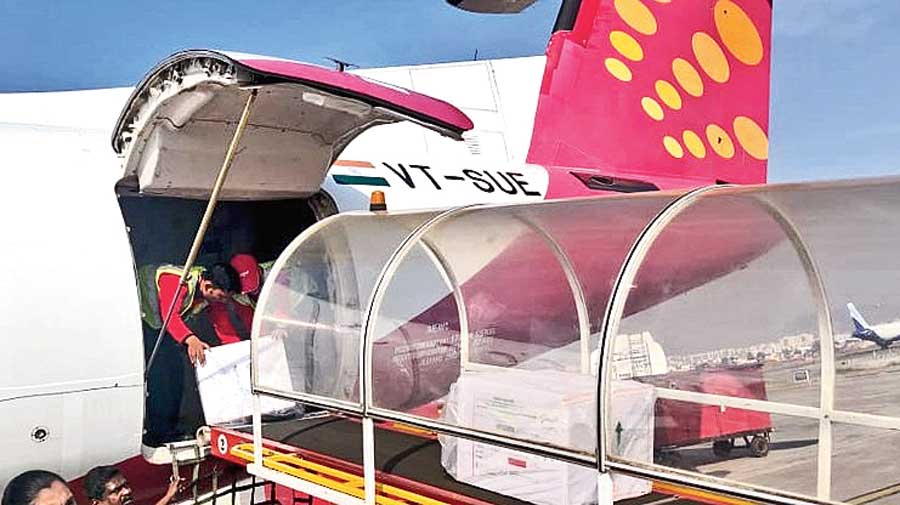 The vaccine consignment being offloaded from the Spicejet aircraft
Telegraph picture
Kinsuk Basu   |   Calcutta   |   Published 13.01.21, 04:56 AM

A consignment of nearly 10 lakh doses of Covishield, a Covid-19 vaccine, reached Calcutta on Tuesday afternoon on a Spicejet flight, with 6.89 lakh doses earmarked for Bengal. The rest will be sent to the northeastern states.

The doses arrived in 83 special boxes from the Serum Institute of India in Pune, which is manufacturing the vaccine.

The doses meant to be distributed across Bengal have been stored in 57 boxes, kept in two walk-in coolers, at the Central Family Welfare Store in Bagbazar.

Over 900 cold chain points have been readied across Bengal for storing the doses. In Calcutta, the cold chain points at five government-run medical colleges, Beleghata ID Hospital and MR Bangur Hospital in Tollygunge will be used for the purpose, officials said.

The bulk of the doses for Calcutta will reach the Calcutta Municipal Corporation’s (CMC) vaccine depot on Ballygunge Circular Road by Wednesday afternoon. From there they will be moved to other cold chain points.

The health department installed two ice-lined refrigerators at the Ballygunge depot on Sunday afternoon for storing Covid vaccines. They have already been switched on.

“The refrigerators have to run for at least 48 hours before vaccines can be kept in them,” a CMC official said.

From the Ballygunge depot, vials containing the doses will be distributed to the boroughs in Calcutta and from there to the vaccination venues.

“Each of the 16 boroughs of Calcutta has a cold chain point. Doses will be stored there as well,” said Atin Ghosh, a member of the board of administrators of the CMC in charge of health.

The health department started transporting vials to some of the neighbouring districts, including North and South 24-Parganas, Hooghly and Howrah, late on Tuesday, within hours of the arrival of the doses at the Bagbazar store.

Senior officials of the department tracked the movement of the vials and supervised other logistics from Swasthya Bhavan.

“A task force headed by the chief secretary, and including the health secretary and other senior officials, has been set up to coordinate with the district-level task forces over distribution of Covishield doses,” a health department official said.

“The supply chain that is utilised for transporting other vaccines, including polio and tuberculosis vaccines, is being used for the Covid-19 vaccine.”

Over 40 insulated trucks, which can maintain temperature at required levels, have been readied to transport doses from Calcutta to the various district headquarters and farther away to rural hospitals.

To streamline distribution logistics, the districts far away from Calcutta have been split into three zones — North Bengal, Malda and Murshidabad, and Bankura and Purulia.

The entire process of distributing the doses will be wrapped up in two days, senior officials at Swasthya Bhavan said.

The health department will start inoculation in over 350 centres on January 16, the day the Covid vaccine will be rolled out across the country. Senior officials said chief minister Mamata Banerjee could speak to some of recipients on the first day.

“Separate sessions are being planned so that the first round of inoculation of health care-workers is over at the earliest,” a senior official at Swasthya Bhavan said.

Arrangements for alternative vaccine carriers have been made so that transportation is not hampered if a vehicle develops a snag. Police officers from across the districts have been informed about the movement of doses from Calcutta and asked to prevent any delay on the way.