V-Day in Salt Lake: Councillors jump queue to get the jab

In the first phase, only healthcare and frontline workers are supposed to get inoculated 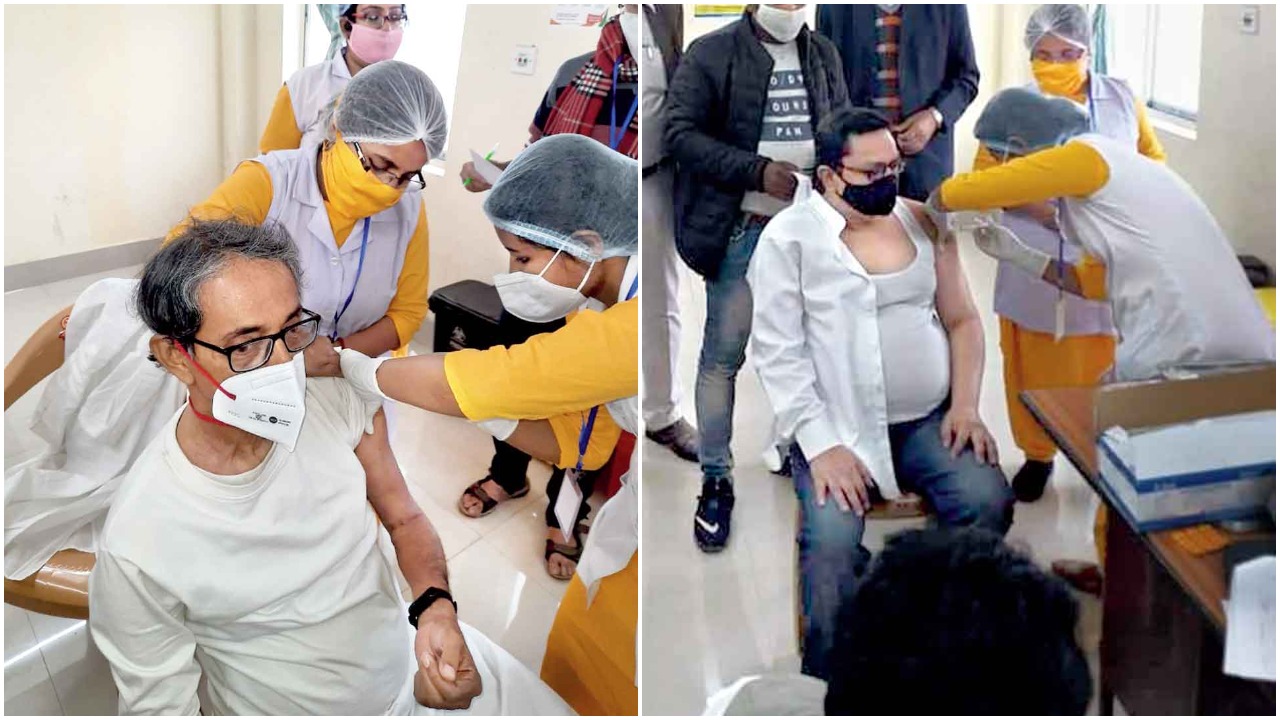 Councillors and civic board of administrators members Pranay Roy and Rajesh Chrimar (right) take the vaccine at the urban primary health centre in Duttabad on Saturday.
Sourced by the correspondent
Snehal Sengupta   |   Salt Lake   |   Published 22.01.21, 01:47 AM

The Covid-19 vaccination drive began in Salt Lake from Saturday with a total of 125 people getting vaccinated at two centres. This included three members of the Bidhannagar Municipal Corporation (BMC) board of administrators who courted controversy by reportedly jumping the queue to get the shot.

In the first phase, only healthcare and frontline workers are supposed to get inoculated.

The drive in Salt Lake is being conducted at the urban primary health centre in Duttabad, opposite Labony Estate, and at the Bidhannagar Subdivisional Hospital, where 71 hospital staffers took the shot on the first day. At Duttabad, the number of people administered vaccines on Day 1 was 54.The day’s target at both sites was 100 each. The drive is being conducted on Monday,Tuesday, Friday and Saturday every week.

The Duttabad centre on Saturday had opened its doors to administer Covishield shots at around 10am. The first vaccine was administered to two doctors — Lakshmipat Nahata, who is associated with the civic body, followed by Kusum Adhikary, the BMC’s chief medical officer.

Roy defended their action saying that they took the vaccine shots as very few people had turned up in the first couple of hours and even those who were there were very apprehensive of taking the shots.“We stepped up in order to inspire people and dispel fears,” he said.

Chirimar said they did not want to deprive anybody from taking the shot. He pointed out that their names did feature on the list of people to be vaccinated although their date was not on the first day.

According to Chirimar, they had received a directive from the health department that beneficiaries would receive messages on their cellphones asking them to visit the centre.

Low turnout to take the shot

“However a day before the drive we were asked to call up 100 health workers out of a list of 457,” said Chirimar. “Only 19 of them agreed to take the shots and just a handful arrived in the first couple of hours on Saturday.”

“We had expected a huge crowd and there was strong police bandobast as well. Since nobody was turning up we asked the health officials if we could volunteer and they did not object,” said Chirimar, who then wrote a post on Facebook to encourage others to take the shot.

Apart from Chirimar and Roy, Saha, who has just recovered from Covid, took the shot. Asked what his urgency was since he is now expected to have developed antibodies in his system, he refused to comment.

Sabyasachi Dutta, the former mayor of the civic body who is now a state secretary of the BJP, said it was selfish of the three members of the board of administrators to take the vaccines. “Everyone will receive the shots but these people could not wait. They manipulated the system to get the shots for themselves,” said Dutta.

The venue of the vaccination
Sourced by the correspondent

People whose names feature on the list of beneficiaries are supposed to get SMS alerts via the CoWin mobile app. The SMS carries the date and venue where the recipient has to reach.

Once there, a health official first enquires if the person has any co-morbidity and if needed, conducts a basic check-up. The candidate is then administered the shot and asked to wait for 30 minutes. In case he feels unwell, doctors conduct a second check-up and if symptoms are serious, he is sent to a hospital. Till Tuesday, nobody in Salt Lake had to be hospitalised.

On January 16, a total of 54 people were vaccinated at this centre, including 20 doctors. On Monday, the number was 41 and on Tuesday 36. There were healthcare workers from centres like Susrut Eye Foundation & Research Centre of HB Block and Charnock Hospital of Chinar Park.

“We are thankful that the authorities are administrating the vaccine to us first but I wish we had a choice of vaccine,” said a healthcare worker who did not wish to be named.

There was an air of apprehension and curiosity and so the centre remained heavily guarded by police. Many residents tried to peep through the windows, after which the windows were kept shut throughout.

Duttabad residents, who clamoured outside, asked the policemen why they were not being given the shots. “Our area is badly affected and you are not letting us take it. Why are they are doing it from our locality then?” an irate Rabi Misra demanded from a cop before being shooed away.

There was a much steadier flow of beneficiaries at Bidhannagar Subdivisional Hospital. “We got 540 doses of Covishield from the district health administration. Our target is 100 beneficiaries per day,” said superintendant Partha Pratim Guha. But 71 took it on the first day, 59 on the second and 69 on the third.

From Monday, the government started using the CoWin app to send out SMSes to inform recipients about the jabs but the authorities suspect something to be amiss.

On Monday, only four of the enlisted people turned up in the first hour at Duttabad. In the first five hours — from 10am to 3pm — only 21 turned up. The next batch of 16 people arrived between 3.30pm and 5.30pm while the rest turned up a little before 6pm. On Tuesday, the number of people who turned up dipped further and stood at 36 at the end of the day.

“It is evident that some people are afraid but there are also some who did not receive the alerts,” said an official.

A conservancy worker refused to take the shot, saying he feared the doctor would ask him to go without alcohol for 28 days after which the second dose has to be taken.