Around 25-30 people involved in CMC's hearse service have voluntarily taken up the job of carrying bodies of Covid patients, working for up to 17 hours a day 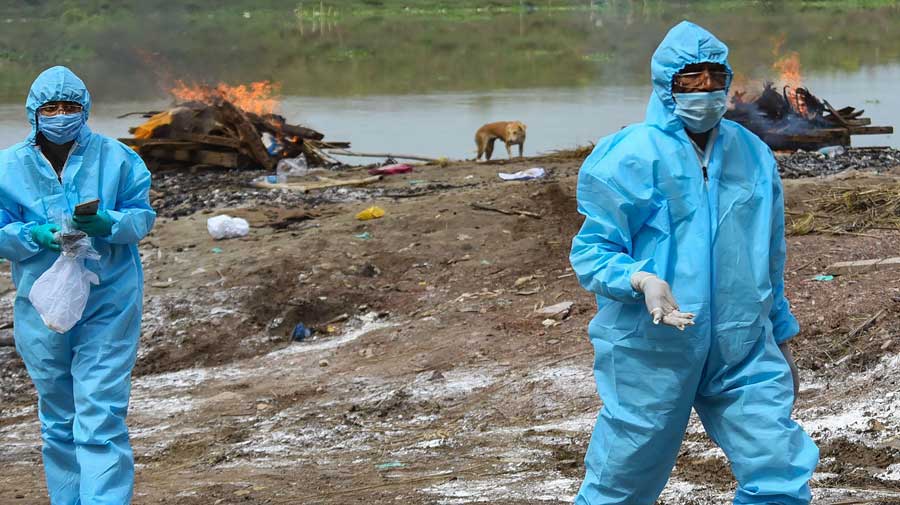 At present, eight hearses are operational to carry bodies of Covid patients in the CMC area. Officials at the Ambulance Headquarters said all bodies of patients who die of Covid-19 have to be taken to any of the earmarked crematoria in a government hearse or a private vehicle arranged by the family after getting clearance from the CMC.
PTI
Monalisa Chaudhuri   |   Calcutta   |   Published 13.10.20, 03:23 AM

He has not gone home for five-and-a-half months. A community hall in north Calcutta, not far from his Shyambazar home, has been his address for all these months during the Covid pandemic.

The reason for his staying away from home for so long? To protect his family from Covid-19 because the work he does is something most in the city would refuse – to physically remove bodies of the people who die of the disease and take them for cremation.

He has removed more than 200 such bodies since the Covid outbreak started in Calcutta, till September. There are many like him in the city but few recognise their toil.

The man did not want to be named for fear that his family would be ostracised by neighbours.

Around 25-30 of Surajit’s colleagues involved in the Calcutta Municipal Corporation’s hearse service at the Ambulance Headquarters on CR Avenue have voluntarily taken up the job of carrying bodies of Covid-19 patients and are working for up to 17 hours a day. Even family members are staying away from most of the bodies fearing infection.

At present, eight hearses are operational to carry bodies of Covid patients in the CMC area. Officials at the Ambulance Headquarters said all bodies of patients who die of Covid-19 have to be taken to any of the earmarked crematoria in a government hearse or a private vehicle arranged by the family after getting clearance from the CMC.

“Initially, the thought of touching a Covid-19 (patient’s) body used to scare me. But now it does not,” said Surajit.

His elderly parents live in his Shyambazar home. His wife is now in her parental home because staying in their one-room home in Shyambazar has become difficult during the pandemic.

Similar is the story of one of his colleagues, who makes fortnightly visits to his family but does not cross the boundary wall of their house near Chetla.

“I go till the wall to meet my wife and she hands me some food. Our young daughter fails to understand why her father is not returning home. Every time I get to leave, she cries,” he said.

Many have completely stopped visiting their homes, fearing jibes from neighbours who feel they are a potential threat to the safety of the people in the neighbourhood.

“That used to be a big problem. Now, people have understood to some extent. But still I avoid going to my neighbourhood. I can see from their body language that they feel a little scared when I am around. So I prefer meeting my family over WhatsApp video calls,” he said.

The men work in teams, each comprising three members — a driver and two attendants. Once they get a call, each of them puts on fresh PPE which they often cannot remove for the next eight-10 hours, one of them said.

Their “official” duty entails physically removing the body from the hospital stretcher to the hearse, driving to the crematorium and then taking the body out of the vehicle. In reality, in the absence of any family members, they often have to stay back till the bodies enter the electric chamber.

How does it feel to touch the body of a Covid-19 patient?

“We take all the precautions and wear PPE, rubber gloves and goggles. We have to wear the PPE for eight-10 hours at a stretch if there are multiple calls. But more than the physical discomfort, it is very traumatic to see a child’s body, unattended by relatives,” said a hearse vehicle attendant, who removed the body of a two-and-a-half-year-old child at Bagmari a few weeks ago.

While carrying the child’s body, he was reminded of his own daughter whom he had not seen for months.