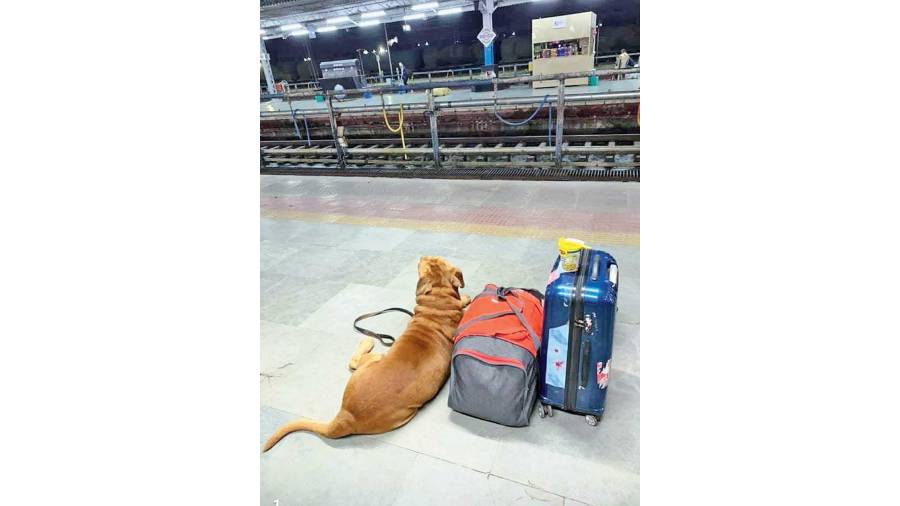 Pet lovers were heartbroken recently to hear about Gultu, a Chow Chow dog, who died while being transported from Calcutta to Mumbai by flight. Travelling can be strenuous for animals but pet-owners often have no choice but to go ahead with it.

Gultu was a patient of vet Krishanu Ghosh,  who runs the VetAssure clinics in Salt Lake’s AE Block and New Town’s BF Block. Ghosh himself isn’t a proponent of air travel for pets but in this case he says there was no choice.

“Snoutless dogs like Chow Chows, Pugs and Boxers have difficulty breathing in high altitudes and one really doesn’t know of the oxygen level in the cargo of an aeroplane. But Gultu had corneal ulcer that needed immediate surgery in Mumbai. Alas! He died of a stroke,” says Ghosh.

Vet Abhiroop Banerjee says another problem in being sent to the cargo in a cage is separation anxiety. “Pets are extremely attached to their families and even a two-hour flight alone can be traumatic for them,” says the vet who sits at GD Block’s Pet Mall & Murphy Veterinary Hospital and Oh My Paws in Uniworld’s Downtown Mall. “Elderly dogs can have cardiac issues and flying isn’t safe for them either.”

Airlines need a “fit to fly” certificate from a vet before allowing a pet on board. “For this, we check the pet’s medical history, determine whether he has any long-term chronic illness, if his reflexes are alert, if his temperature is normal, vaccines are up to date, periodical deworming has been done, lungs and heart are normal,” says Banerjee. In case of foreign travel, microchipping is a must.

Upon landing at the airport, Banerjee says the first thing to do is to reunite the pet with his family. “Once the pet has calmed down, take him out for some fresh air and then give him water,” he says.

Ghosh prefers trains and has himself travelled with his Lhasa Apso on the Rajdhani Express. “One has to book all four seats in an AC first class coupe to take along pets. In my case, we had got great service with the pantry folk even cooking boiled chicken for my dog’s meals,” he said.

Some dogs prefer to relieve themselves only in familiar corners and this can be a problem on trains but despite this, vets say trains are safer than flights.

Bruce, the FE Block French Mastiff, seated by the window during a road trip
Sourced by the correspondent

Road travel is by far the best. “A journey of up to two hours is no big deal — I have patients travelling that much from Howrah to my New Town clinic. Any longer than that and you should pull over now and then to walk the dog and offer him water. You can call the vet if you need help and make a detour to a medicine shop in case of an emergency,” says Banerjee. “Feed them small meals to avoid nausea.”

Ghosh has some standard guidelines for dogs on the road too. “I suggest canned food that is low in volume and high in calorie content. Consuming this, dogs don’t feel nauseous. I also ask families to carry medicines for vomiting, diarrhoea and a pain killer. Anti-anxiety pills are also available,” he says.

Banerjee asks owners of snoutless breeds to be careful even on road trips. “Don’t keep the AC on for too long. Roll down windows once in a while for fresh air. Also, halt frequently and let him walk,” he says.

Gone there, done that

In the pre-pandemic days, vets in the twin townships would get 25 to 30 requests a month for “fit to travel” certificates. “That’s how common pet travel has become, especially in New Town, that has a large population hailing from other states,” says Banerjee.

FE Block’s Vivek Vikram Singh travels extensively with his French Mastiffs, especially with Bruce, who would even take the train to Darjeeling.

When the lockdown got called last year, Vivek and Bruce got stuck in Darjeeling. “We later managed a curfew pass and drove 12 hours home. I had a special mattress made for him to fit the back of our SUV and he was very comfortable on it,” says Vivek.

Prasenjit Ghosh had such a harrowing experience flying their Shih Tzu Coco in from their previous residence in the US, that he has sworn never to do it again. “Many airlines would not allow pets and even fewer allowed snoutless pets due to their predisposition of respiratory issues,” says the resident of DLF New Town Heights.

The formalities were labyrinthine, but in the US and Dubai, where the flight halted, they  got excellent service. “It was Calcutta airport that was a nightmare and we were allowed to take Coco him home 12 hours after landing!”

Coco and their Lhasa Apso Sasha now travel long distance comfortably with them by car.

Pratyusa Banerjee, who calls herself the sister of the deceased Chow Chow Gultu, urges for better facilities for animals on flights. “The flight charged us Rs 14,000 — double a passenger ticket — to ferry him and we had paid Rs 7,000 more to assure his safety. If they are charging us for it, they should provide a vet and oxygen facilities in the flight and airport,” she says.

The family is distraught without Gultu and has decided to get two Chow Chow puppies from Chandigarh to help them cope with the loss. “But we have told the breeder the pups cannot come by air. They must come by road,” says Pratyusa, a student of Inifd Saltlake.

Have you faced trouble in transporting your pet?