A new gate will be built, about 200m from the airport Gate No. 2.5, to minimise traffic jams in the area 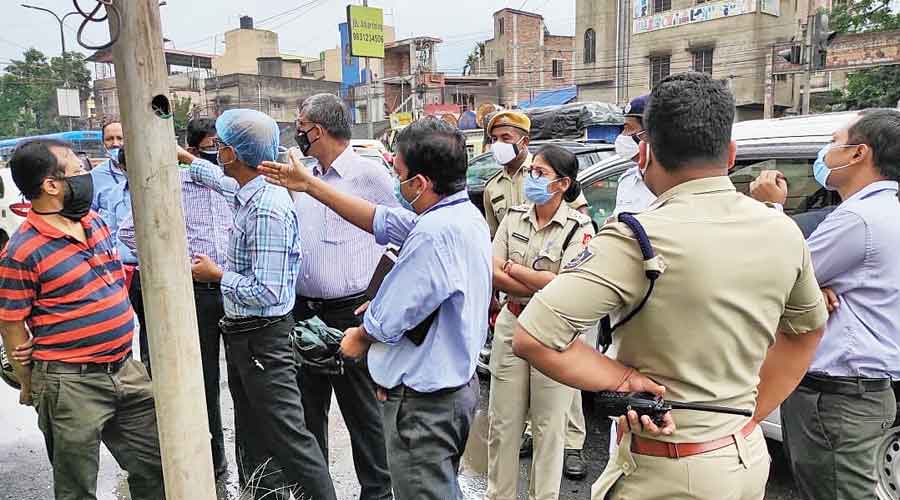 Officers of the Bidhannagar commissionerate with officials of various government agencies during an inspection of Jessore Road on Tuesday
Telegraph picture
Snehal Sengupta   |   Dum Dum   |   Published 17.09.20, 03:38 AM

A 500-metre stretch of Jessore Road ahead of and after the Belghoria Expressway flyover will be widened to ease traffic flow in the airport area, an officer of the Bidhannagar commissionerate said on Wednesday.

Also, a new gate will be built on Jessore Road, about 200m from the airport Gate No. 2.5, to minimise traffic snarls in the area, the officer said. The new gate will be wider than the 2.5 one so that more vehicles can pass through it, he said.

The T-junction at Gate No. 2.5 gets choked the moment there is a heavy rush of vehicles, Sandipan Guha, a resident of Dum Dum who drives down the road regularly, said.

Many people now enter the airport complex through the flyover instead of going through the chaos on the slip road. They take the road in front of Airport police station to reach Gate No. 2.5 from the opposite end and add to the congestion there, an officer said.

Metro had on September 9 reported how vehicles crawl on Belghoria Expressway, Jessore Road and the airport’s slip road during rush hour because of a heavy traffic flow and innumerable potholes.

Vehicles, including two-wheelers, headed to the city from Barasat, Dakshineswar, and Madhyamgram via Jessore Road or going to these places from the city are caught in traffic snarls that add more than 45 minutes to their travel time.

The new gate will help in quicker dispersal of vehicles headed for the VIP Road from Belghoria Expressway as well as from Madhyamgram and Barasat. Once the gate is completed, motorists and two-wheeler riders can turn left and get on the airport road from the base of the flyover, an officer in the commissionerate said.

Now, vehicles headed for the VIP Road from these places have to travel around 200m before they can turn left and get on the airport road from Gate No. 2.5.

A joint inspection of the area was carried out by officials from the public works department, the Barasat highway division, and the Dum Dum Municipality, apart from representatives of the National Highway Authority of India and the Airports Authority of India.

This was done to ensure better coordination among all agencies during the widening of the road, the police said.

The new traffic plan is expected to ease snarls and “drastically cut” travel time, Dhritiman Sarkar, the deputy commissioner, traffic, of the Bidhannagar commissionerate, said. “We have conducted a detailed study… we are positive that this plan will work best for the region for now.”

The airport’s outer compound wall will be broken to create the new gate that will give vehicles headed from the expressway access to the slip road without having to move till Gate No. 2.5, a PWD engineer who was part of the inspecting team said.

Additionally, a 500m-long elevated storm water drain will be removed from near the approach to Gate No. 2.5. A new one will be created further back, the engineer said.

A civic official from the Dum Dum Municipality said the proposal had been accepted and that a detailed survey would be carried out to shift the drain.