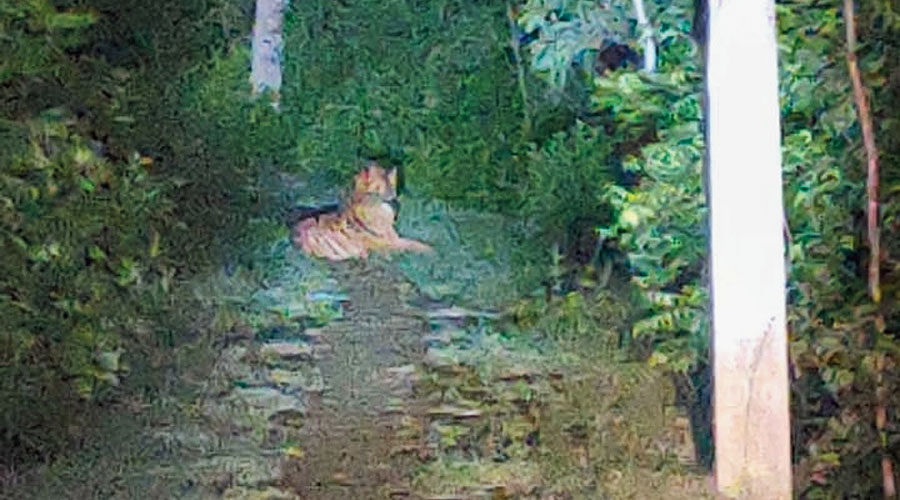 The tiger on a village road on Monday evening. It sat there for over two hours, according to police and forestersTelegraph picture
Telegraph picture
Debraj Mitra   |   Calcutta   |   Published 07.10.20, 02:02 AM

A tiger that had strayed into a village in the Sunderbans on Monday evening killed livestock and squatted on a brick road for hours before retreating into the forest.

The intrusion of tigers has come down substantially after nylon nets were installed on the edges of the forests. The latest intrusion drew a crowd of a “few thousands” and police and foresters had a tough time restraining the assembly.

By Monday night, several pictures that showed the tiger at a stone’s throw from an extended hand with a mobile phone started doing the rounds on social media.

The tiger came from the Ajmalmari forest and crossed a tributary of the Matla before entering Baikanthapur 6 village, under Maipith Coastal police station, a forest department official said. The village is around 30km from Kultali town and 75km from the heart of Calcutta.

The forests of the Indian Sunderbans have a nylon net fencing spanning over 200km. “The tiger must have sneaked out through a hole in the net. People venturing into the forest often cut the nets,” said a forest official.

It seems the big cat’s first stop was a cowshed where it is said to have killed a cow and a goat.

“Members of the family which owns the cowshed came out alerted by the noise and raised the alarm once they spotted the big cat,” said Ajay Das, president of the Joint Forest Management Committee of Baikanthapur 6.

The tiger was first spotted around 6.45pm. A team from Maipith Coastal police station, led by officer-in-charge Farooq Rahman, reached the spot within 20 minutes.

“Many people had come from adjacent villages to see the tiger. People were constantly trying to take pictures, with the tiger less than 200 metres away,” said Rahman.

The police barricaded the area and used hailers to restrain the crowd. Villagers said a team of foresters arrived at the spot after an hour.

The team fenced the village area with nylon nets and used crackers and flashlights to drive the tiger away. Eventually, the tiger went back into the thin forest.

“We patrolled the entire area throughout the night. In the morning, we used drones to scan the area and the river once more to be sure that the tiger had crossed the river back into the Ajmalmari forest,” said Milan Mandal, the divisional forest officer of South 24-Parganas.

V.K. Yadav, the chief wildlife warden of Bengal, said patrol boats filmed the tiger in the river, headed towards the forest.

“It was an old tiger. Our team responded promptly and reached the spot. They had tranquilliser guns and trap cages. The entire area has been fenced off and vigil has been beefed up,” said Yadav.

The tiger on a village road on Monday evening. It sat there for over two hours, according to police and foresters
Telegraph picture

Constant vigil is needed because the tiger might turn up in the village again, said a forest official. “It had killed cattle but could not eat them. Tigers have a tendency to come back for the kill,” he said.

Wounded and aged and ailing tigers are known to target easier prey like cattle and humans. Pugmarks can be studied to identify a tiger but heavy rain in the area has washed most pugmarks away, said a local forest official.

“A female or pregnant tiger chased away by a male tiger can also stray into a human settlement,” said Joydip Kundu of the Society for Heritage & Ecological Research (SHER), an NGO that works to reduce human-wildlife conflict in the Sunderbans.

At least 17 men have been killed in tiger attacks in the Sunderbans so far from April, according to official figures. But all of them had ventured into the forest, said officials.

“The tiger intrusion is the first in at least two years. There was one in 2018 in Jharkhali. But even then, there was no human casualty. Nor did we have to tranquillise the tiger,” said a forest official at the headquarters.

Before nylon nets were in place, around 10 tiger intrusions were reported every year. Many more used to go unreported. Since 2012, when the net project was complete, the intrusions have come down to around one or two every year, said forest officials.

The tiger on a village road on Monday evening. It sat there for over two hours, according to police and foresters
Telegraph picture
Tiger in trap cage

A tiger was captured in a trap cage in the patch of forest on the edge of Baikanthapur 6 on Tuesday evening. The trap had been laid because the tiger spotted earlier was expected to come back for the kill, said a forest official. “The captured tiger seems to be the same cat that had strayed into the village. It will be taken to the tiger rescue centre in Jharkhali. A team of vets will examine it on Wednesday,” said Yadav.