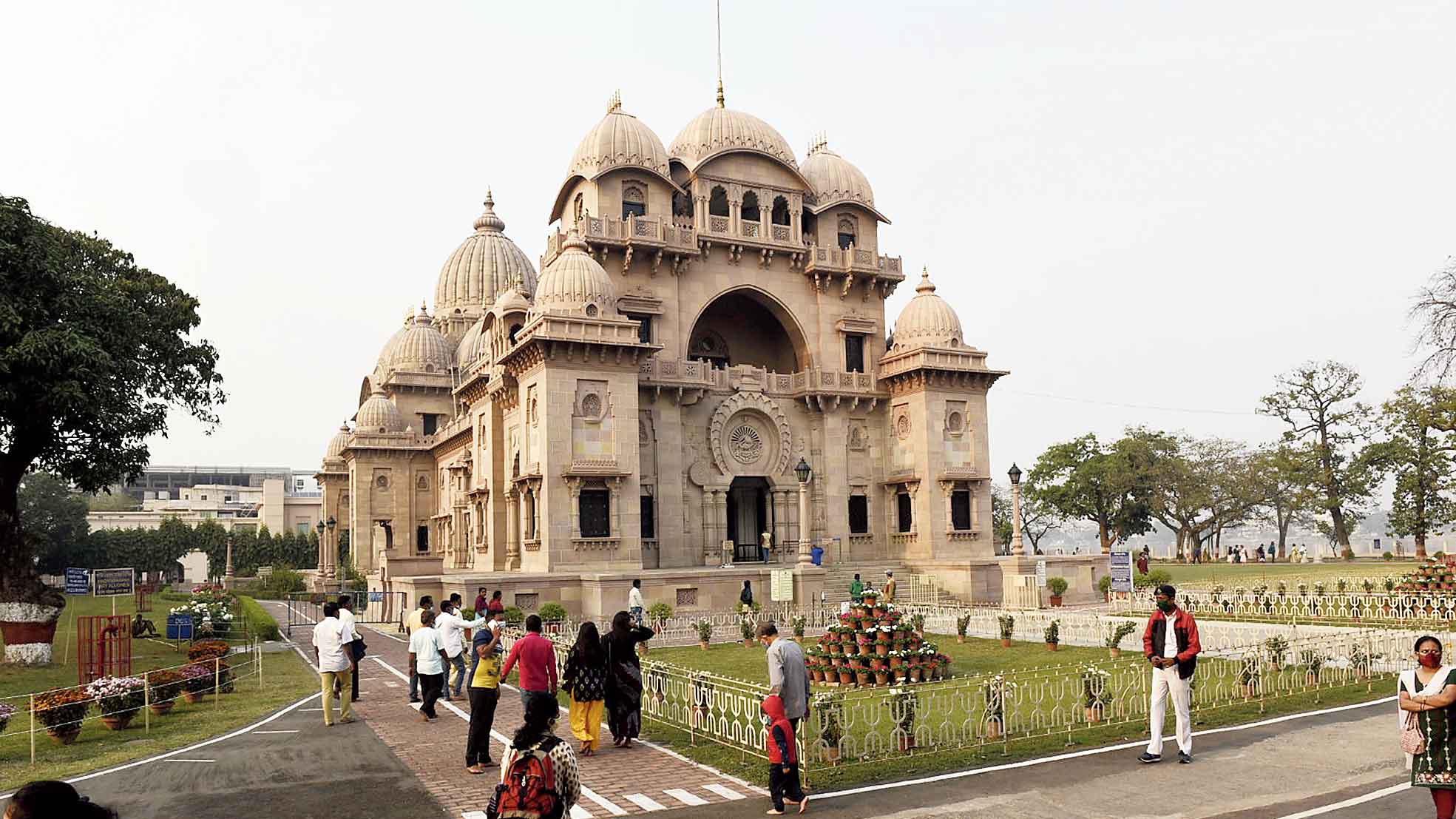 Visitors at Belur Math on Wednesday. The Math had remained closed for visitors for nearly six months because of the Covid pandemic and reopened its doors on Wednesday.
Picture by Bishwarup Dutta
Our Special Correspondent   |   Belur   |   Published 11.02.21, 01:41 AM

Thermal scanning for body temperature, markings to ensure physical distancing and counters to dispense sanitisers ‑ Belur Math took a series of precautions against Covid-19 as visitors walked in for the first time on Wednesday after nearly six months.

The gates of the Math were open for visitors from 8.30am till 11am and again from 3.30pm till 5.15pm. Police were deployed on the campus, along with monks and brahmacharies, to ensure no one was without a mask and there were no huddles.

“The footfall will gradually go up. We will keep a strict watch on all movements so that no one violates the Standard Operating Procedure (SOP) that has been drawn up,” said a senior monk at the Math, the global headquarters of Ramakrishna Math and Ramakrishna Mission on the banks of the Hooghly. “It is comforting to see devotees visit the Math again.”

In keeping with the SOP, devotees and other visitors were allowed entry into four temples in the Math compound — the temples of Sri Ramakrishna, Holy Mother, Swami Vivekananda and Swami Brahmananda. The Pally Mangal stall and the book stall, too, were accessible to visitors.

No one was allowed to meet Swami Smaranananda, the 16th president of the order, and other senior monks. Distribution of bhog has been suspended, too.

Outside the main entrance of the Math hangs a board that has all instructions for visitors written on it. The instructions are related to hand hygiene, physical distancing and other safety measures.

The names of the four temples which devotees are allowed to visit are written in bold letters on board. The Math timings, too, are prominently displayed.

Moveable guard rails were placed in the middle of the main entrance to demarcate ways to enter and exit. Visitors were barred from stepping on the green lawns around the temple of Sri Ramakrishna.

Men and women volunteers were deployed to carry out thermal checks and distribute sanitisers. By 5.15pm, rows of men and women were seen walking out of the main gate, some with their hands folded.

Visitors at Belur Math on Wednesday
Pictures by Bishwarup Dutta

“Over a period of time, devotees will get used to the new order inside the Math. We just hope that none of our monks or employees contract Covid-19,” said another senior monk, who was overseeing the arrangements at the Math.

Belur Math had shut its gates to visitors on March 15 last year as a precaution against Covid-19.

The gates were reopened on June 15, and visitors could enter the Math following all health protocols, but had to be closed again on August 2 as a number of monks and employees tested positive for Covid.

Around 300 monks stay on the Math premises and close to 250 others work there.