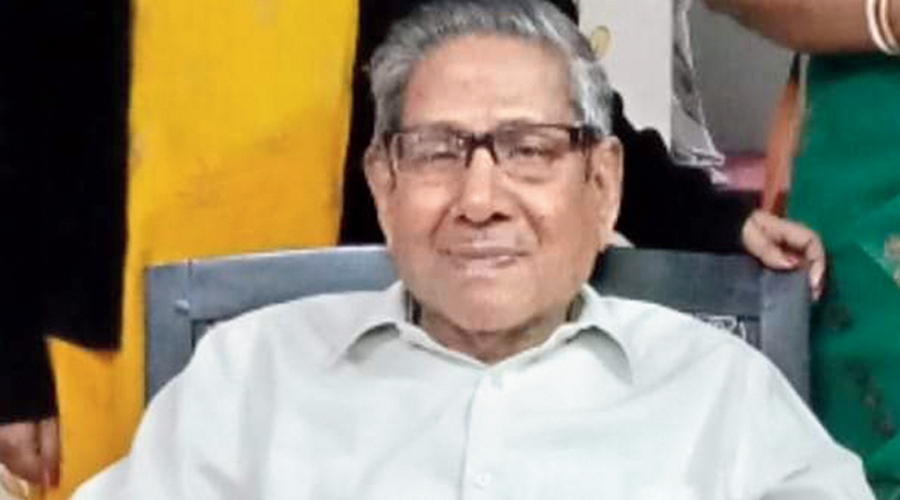 Amalash Choudhury, retired professor of zoology and marine sciences from Calcutta University and a pioneering personality in Sunderbans research, succumbed to Covid-19 on Wednesday in a hospital at North 24-Parganas.

Choudhury was the founder of the marine science department in Calcutta University.

A nonagenarian, he had initiated ecological research on the Sunderbans in the sixties. He set up two laboratories with his own resources — Sushma Debi Marine Biology Research Centre  was set up on Sagar Island in the sixties and another the nineties at his residence in Sodepur.

“Professor Choudhury was the founder of marine science related academic discourse and research in eastern India. His work in Gangetic delta and Sunderbans ecology stood out for its uniqueness,” said Sandip Mukherjee, a scientist in the Union ministry of earth sciences in Delhi and his former student.

Pulak Lahiry, a retired Calcutta University professor in zoology department and one of Choudhury’s earlier students, pointed out his great dedication in research throughout his life. “During 60s, when he built the laboratory in Sagar; nobody was used to talking about Sunderbans....”

“He believed that just publishing scientific papers is useless unless those come to the help of people on the ground. Even in his 90s, he insisted on going to the field,” said one of his former students and at present in an important position in the state government.

“Professor Choudhury was one of the finest teachers. Brilliant in his lectures, always unruffled, measured voice and unbridled affection for his students; he was a standout and stalwart figure” said Sujata Basu, a student towards the end of his teaching career.

Lamenting his demise, Sunderbans affairs minister Manturam Pakhira, said as a  Sunderban Development Board member, he was always ready to contribute for the development of the climatically-fragile area.