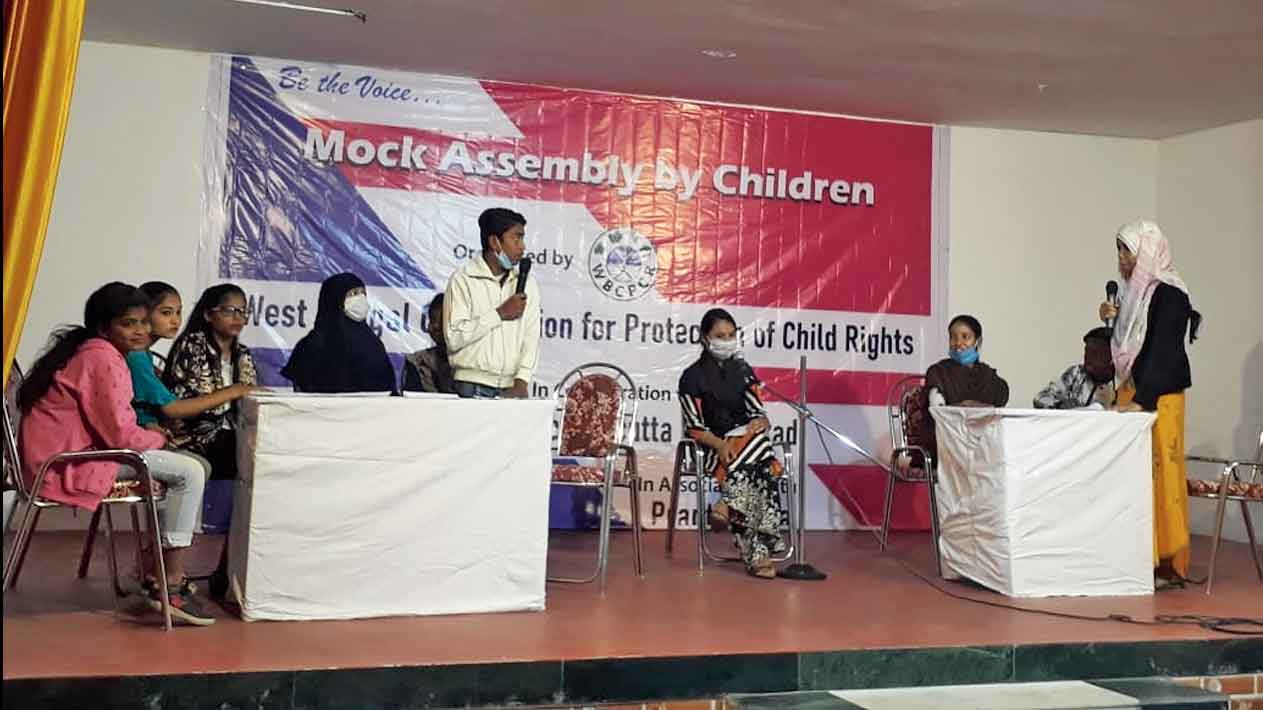 The chairs were set. The chief minister, along with the rural development minister, the finance minister, the health minister and the education minister took their seats in presence of the Speaker and three Opposition members to discuss the current condition and new policies of the state.

A mock assembly session was taking place at Labanhrad Vidyapith, organised by the West Bengal Commission for Protection of Child Rights (WBCPCR) in collaboration with the Rotary Club of Calcutta Labanhrad and Prantakatha, an NGO.

“It is very important for children to know about their rights and have political awareness while they are growing up. Soon they all will be 18 and will have the right to vote, then we cannot expect them to suddenly be aware of the current scenario. So this is an attempt to make them more aware. It is also important to know what these kids are thinking as it helps us work better,” said Ananya Chakraborti Chatterjee, chairperson of WBCPCR.

“Last year was very difficult for children, especially with schools closed. The online way of learning is a very creative approach and now they are again going back to their classrooms. Everyone is still scared to go out but we need to believe that we can overcome this,” said Sudeshna Roy, special consultant of the commission.

The session began after the Speaker asked everyone to maintain a minute of silence for those who lost their lives to the pandemic.

The chief minister, after introducing herself, talked about the importance of the Protection of Children from Sexual Offences Act and how it protects a child from sexual harassment and violence while safeguarding their interests. She also talked about different schemes through which free cycles are given to students, medicines are distributed free as are sanitisers and personal protection equipment for doctors.

The education minister talked about building more schools in remote areas and hostels for those who cannot travel everyday to school. The health minister informed the house that they had built more than 400 hospitals, repaired intensive care units and built quarantine centres.

But soon the atmosphere of the Assembly changed when the Opposition leaders started raising questions about government schemes and picked faults in them. If the government had indeed built so many hospitals then why were people still dying in hospital corridors and on the road without treatment due to lack of beds, they demanded. They also blamed the government for its failure to keep people at home to stop the spread of the virus.

“I have never seen a real Assembly in session but we keep visiting different political gatherings and I know about Pocso. This was my first attempt at a mock parliament and I am happy we did well,” said 17-year-old Shaista Shirawat from Rajabazar, who played the part of the chief minister.

“With schools about to reopen, we are repainting and sanitising the premises. This event is like a prelude before we let the students in,” said Sajal Kanti Mondol, headmaster, Labanhrad Vidyapith.