WBPCB has decided to experiment with immersion in ponds 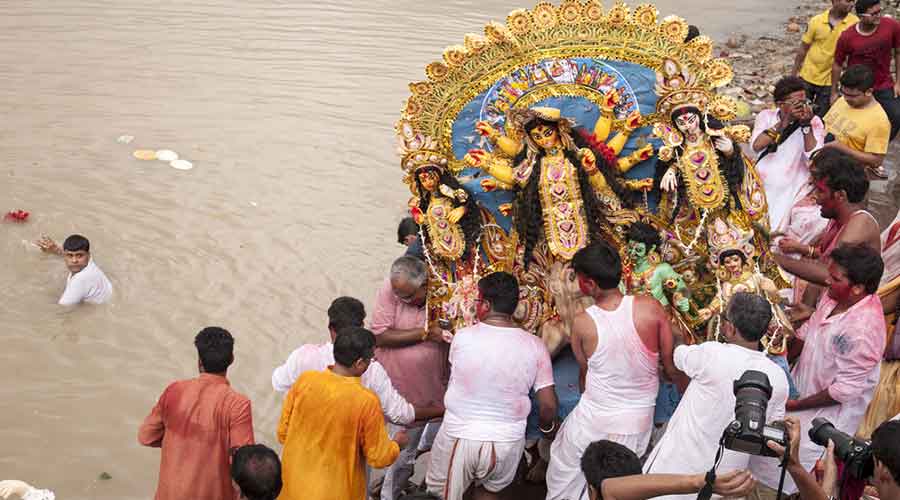 WBPCB has decided to experiment with immersion in ponds taking a cue from the successful New Town Kolkata Development Authority
Shutterstock
Jayanta Basu   |     |   Published 24.10.20, 06:33 AM

The West Bengal Pollution Control Board (WBPCB) has set out to create a model immersion mechanism in two ponds under the South Dum Dum Municipality this year to explore how the immersion process can be executed adhering to the guidelines of the National Mission for Clean Ganga (NMCG) guidelines.

The initiative will be put in place from Durga puja immersion till the observance of Chhath puja.

According to Panchu Roy, chairman of the South Dum Dum Municipality, around 600 Durga and Laksmi idols are generally immersed in these two water bodies.

WBPCB has decided to experiment with immersion in ponds taking a cue from the successful New Town Kolkata Development Authority (NKDA) experience and also because the union agency’s guideline bars immersion in flowing open water of the Hooghly.

“We have decided to create a model immersion system in two ponds in South Dum Dum — Debi Ghat in Lake Town and Tank no. 4 in Dum Dum Park. Immersion will be organised in accordance with the immersion guidelines earmarked by NMCG,” said state pollution control board chairman Kalyan Rudra on Wednesday.

Under WBPCB monitoring, the municipality will barricade and earmark a part of the water bodies for immersion. A synthetic lining will be spread out below the water to arrest the dissolving pollutants, the floating garbage will be continuously cleaned. A mobile water treatment facility is likely to be set up to treat the water where immersion will take place. The quality of the water will also be measured before, during and after immersion to assess the pollution trend.

Rudra admitted that the idea had emerged from the successful execution of the pond immersion model executed by NKDA in recent years.

According to NKDA chairman Debasish Sen, the idols are immersed through specially designed ramps with stairs on both sides at Upasana Ghat. “Idols are slid down the ramp into the water, restrained by ropes held by expert worker groups deployed by the NKDA. They push the idols into the water from where cranes pull them back onto the bank,” Sen explained to The Telegraph Salt Lake on Wednesday.

The PCB immersion action was prodded by a meeting chaired by chief secretary Alapan Bandyopadhyay last Saturday where the importance of toeing the NMCG guidelines was stressed in presence of Rudra and PCB member secretary Rajesh Kumar. NMCG, which provided the guidelines in 2018, recently reiterated the mandate in a letter to the state government.

“The chief secretary discussed with the municipalities the need to implement the mandate and clean up the river immediately after immersion last Saturday. Subsequently the principal secretary of the environment department also stressed the importance of the process before the district magistrates,” added Rudra.

The NMCG guidelines state that “adequate arrangements should be made for designated idol immersion sites within municipal area or bank of river Ganga and its tributaries by constructing temporary confined ponds with removable synthetic liners at the bottom”.

“This model is nothing new. Almost 15 years back, the ramp-within- water-body model was successfully deployed in Kalyani,” pointed out Biswajit Mukherjee, former chief law officer of the state pollution control board. Mukherjee has recently written to the state administration, urging them to ban immersion in the open stretches of all rivers.