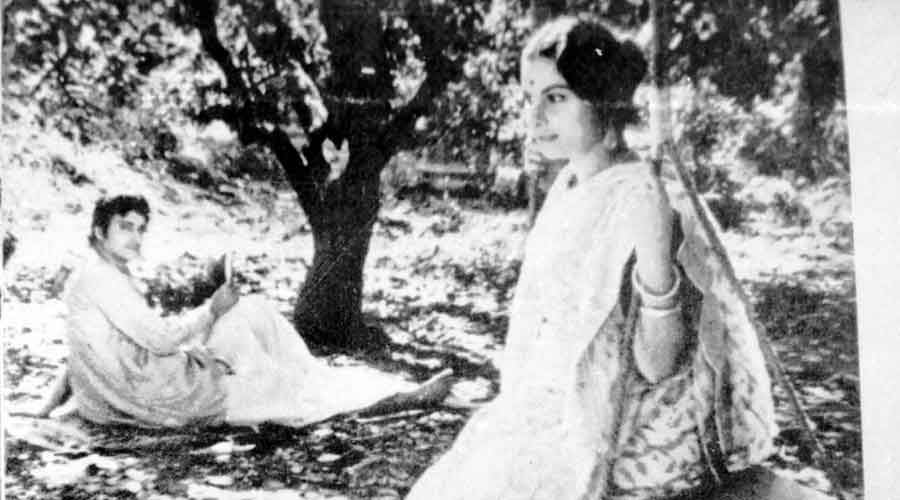 Soumitra Chatterjee and Madhabi Mukherjee in the swing scene in Charulata
Sourced by The Telegraph
Parichay Patra   |     |   Published 16.11.20, 02:21 AM

Apur Sansar (The World of Apu, 1959), the much-awaited last part of Satyajit Ray’s trilogy, opens with a non-graduate Apu (Soumitra Chatterjee) receiving a certificate from his City College professor.

A close-up of the certificate cuts to their conversation on his inability to complete a formal education and the professor’s insistence on the continuation and honing of Apu’s literary skills as his paternalistic voice drowns in a cacophony of Left slogans making their way in from the turbulent Calcutta streets, situating the film in the present, marking it different from the other two in the trilogy as they existed in other times. This makes the professor visibly annoyed while Apu’s face betrays signs of a confused discomfort. The actor, throughout his life, will retain his faith in that politics.

Soumitra Chatterjee, the newcomer, an amateur theatre actor of that time, himself did his literature degree from City College. It might well be the reason why the cinematic Apu migrates to that institution unlike his literary avatar in Bibhutibhushan Bandyopadhyay’s novel who went to Ripon College as the Ripon College library, as a veritable gold mine full of Nietzsche, Emerson and Turgenev, played an important part in the development of Apu’s literary mindscape.

On the other hand, Ray’s Künstlerroman, since its very beginning, follows the trajectory of its new-found hero, whom film historian Sharmistha Gooptu would later address as apparently “non-heroic” and “Tagorean”. Ray’s Apu does not offer much indication of his literary influences except for what the actor reveals through his Tagorean self.

Perhaps, as Soumitra Chatterjee himself mentioned, the audience of his time wanted “other kinds of young men” and “other kinds of romances”; the ‘other’ as opposed to the image of Uttam Kumar, the biggest matinee idol. Bengali film industry, with its consistent engagement with Bengali literary traditions in order to construct its region-nation by dissociating itself from the Bombay popular that did not receive aesthetic approval from the Bengali bhadralok, welcomed Chatterjee as its intellectual hero with Tagorean sensibilities.

In return, Chatterjee retained his intellectual traits throughout his prolonged career through his support for Left politics, co-editing (with Nirmalya Acharya) of such literary magazines as Ekkhon, recitation, publication of poems and continuation of a thespian life with translation-adaptation of several international dramatic texts.

Despite his strong association with the Bengali popular for decades, Chatterjee was able to remain the quintessential Bengali intellectual associated with the Ray canon, with the latter making his entry into the transnational festival circuit. Thus Chatterjee contributed in the perpetuation of the problematic art/popular binary in the Bengali public sphere, with, like many other cine-industrial locations, the art being associated with cultural taste and privilege.

With Apur Sansar as debut, Chatterjee went on to have an illustrious career that marked several breaks and turns. Especially in the long 1960s, he reshaped his Tagorean self as the unemployed youth and bhadralok loafer on screen in such remarkable pop-cultural dalliances as Teen Bhubaner Pare (Ashutosh Bandyopadhyay, 1969). The ethos demanded crossing of borders and binaries, the movement of the youth in crisis into other domains as in Aranyer Din Ratri (Days and Nights in the Forest, Satyajit Ray, 1970), where the cursed and forever-unfinished memory game will surely raise problematic names as Mao Tse-tung.

Violence, street-politics, unbridled sexuality, the liberated new woman, the educated bekar and the loafer figure found ways of expression through Chatterjee and a few other actors of the time, with Uttam Kumar restructuring himself as the forever misunderstood elder brother of yesteryear who has now fallen from grace, the Turgenev-like father who is unable to understand his Nihilist sons but has all the compassion in the world for them.

After Uttam Kumar’s untimely death, Chatterjee continued with the responsibilities of a declining industry and, most notably, a declining class who can no longer exert its privilege in the changing times. His unfaltering political beliefs remained with him till his final days while his state experienced several upheavals the consequences of which are yet to be decided.

Notwithstanding the changes, Soumitra Chatterjee, understandably, remained what he was. His image most notably associated with the early films of Ray, the actor remained Ray’s most trusted lieutenants in the latter’s dealings with modernity and the novel form. From his tram-rides, nocturnal escapades and a subtle awakening of sexuality in Apur Sansar to the storming into the 19th century interiority in Charulata (The Lonely Wife, Satyajit Ray, 1964), Chatterjee remained immersed into the novelistic in Ray canon.

Perhaps his own cinematic ideas were shaped through these experiences as his disapproving of Ritwik Ghatak and his apparent use of melodrama became well-known through his interviews.

There is one image of this specific phase of his career that stays with me as remembered film. The rise and fall of Charulata (Madhabi Mukherjee) on the swing in a garden where Amal (Soumitra Chatterjee) rests and reminisces, as their exchange of ideas leads invariably to the literary.

With a glimmering of light and shades on Charulata and the ephemeral experience of the unattainable, the hero decidedly migrates to the literary experience around which the cinematic revolves. This is what will gradually fade into oblivion, taking the actor along with it.