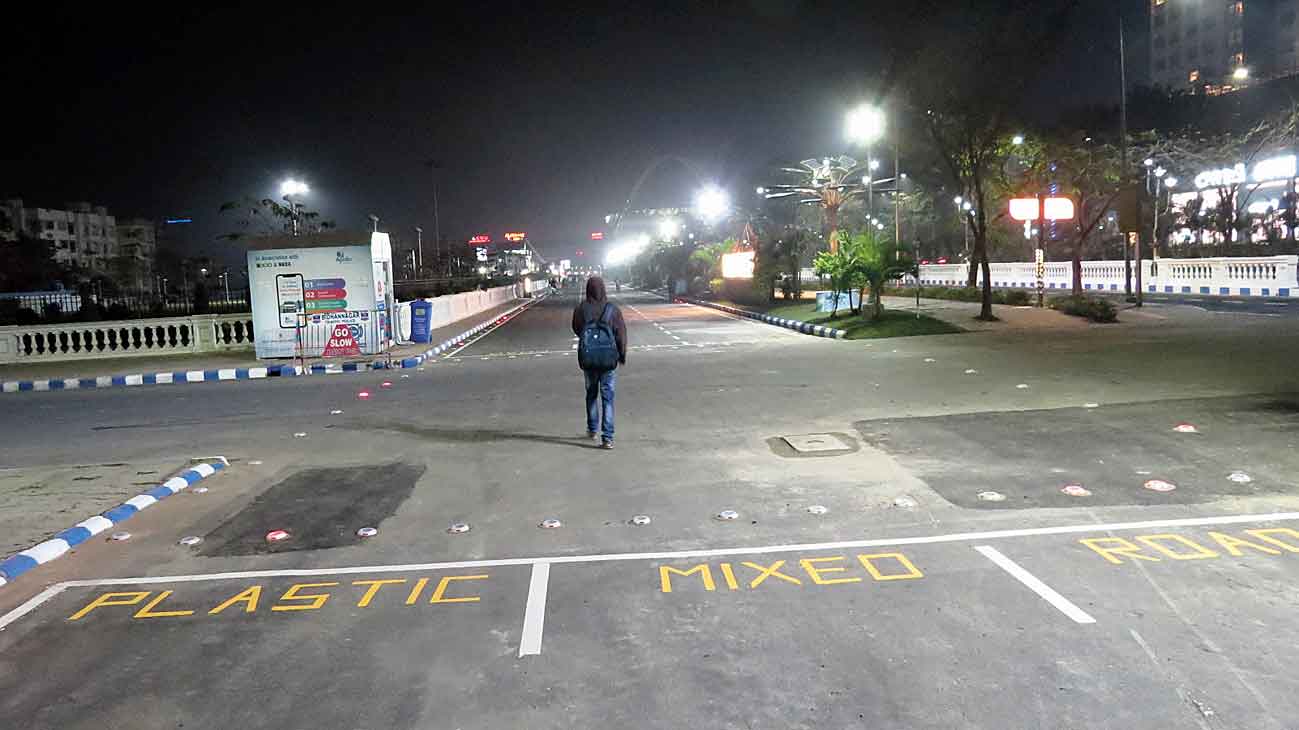 A 400m stretch in front of New Town Mela Ground was re-introduced to residents as Smart Street. The service road with two flanks which serves as a parking lot when events are held in the fairground now demonstrates why New Town calls itself a Smart City.

“Many people come from other cities or even other municipal areas and ask us what makes us a Smart City. We have 565 CCTVs, we have wi-fi hotspots all along the Major Arterial Road, we have a plastic road near City Centre 2, we have 115 smart streetlights in front of Central Mall... But is it possible to take people everywhere and show them? So we thought of a stretch where all the smart initiatives we have undertaken in various corners of New Town and things that we are planning to do can be showcased together. The first smart benches and solar trees, for instance, have been installed here. If the pilot projects work well, we will introduce them in other parts of the township,” said Hidco and NKDA chief Debashis Sen at the inauguration of the Smart Street on Tuesday evening.

The Telegraph Salt Lake takes a tour with him to understand the smart features. 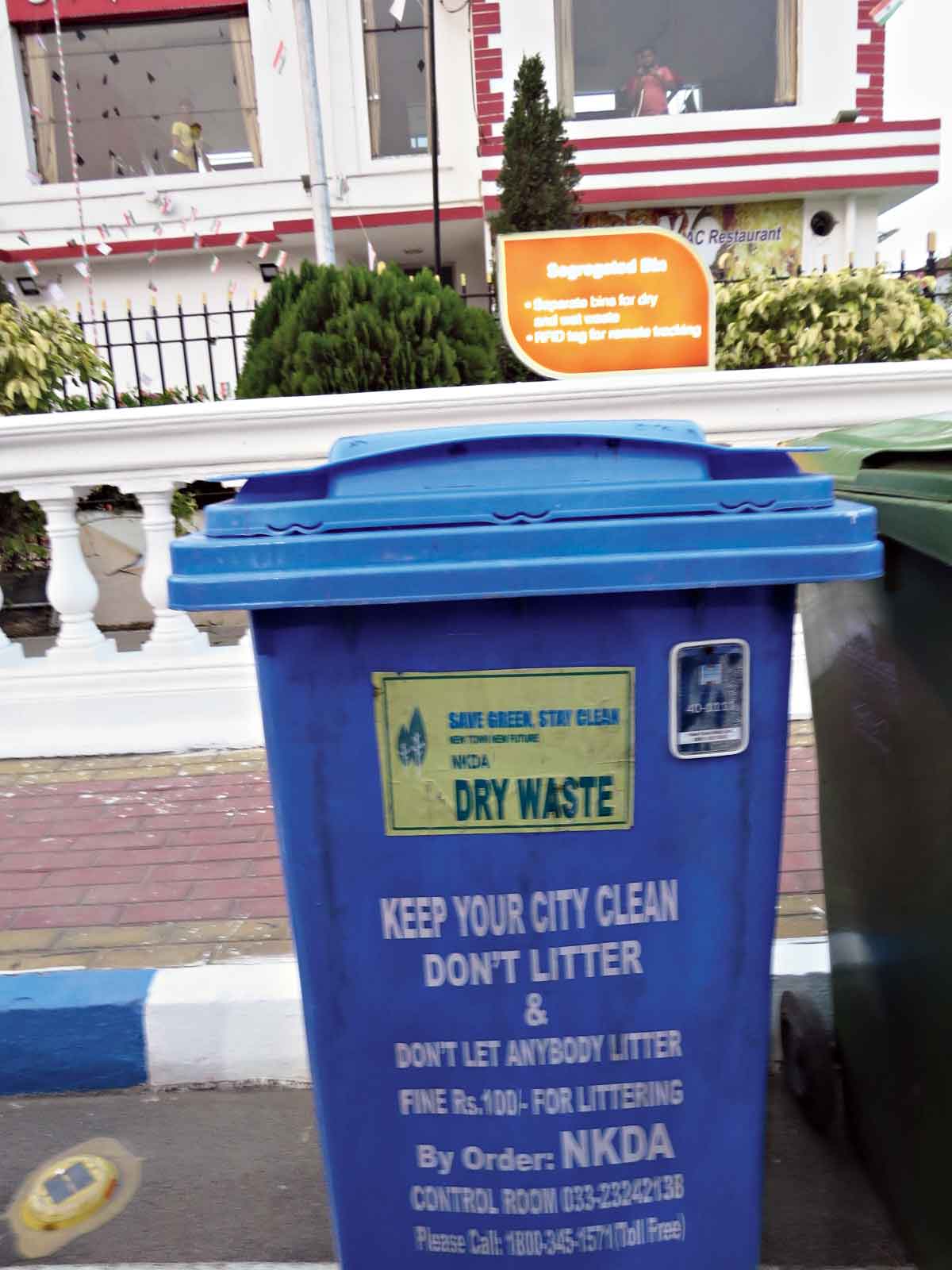 Two bins have radio-frequency identification (RFID) tags on them in which their locations have been integrated. RFID is a tracking system that uses smart barcodes in order to identify items. “Our sweepers have a card reader in their mobile phones. When they scan the tag, we get to know that the bin has been cleared and at what time,” said an NKDA official. 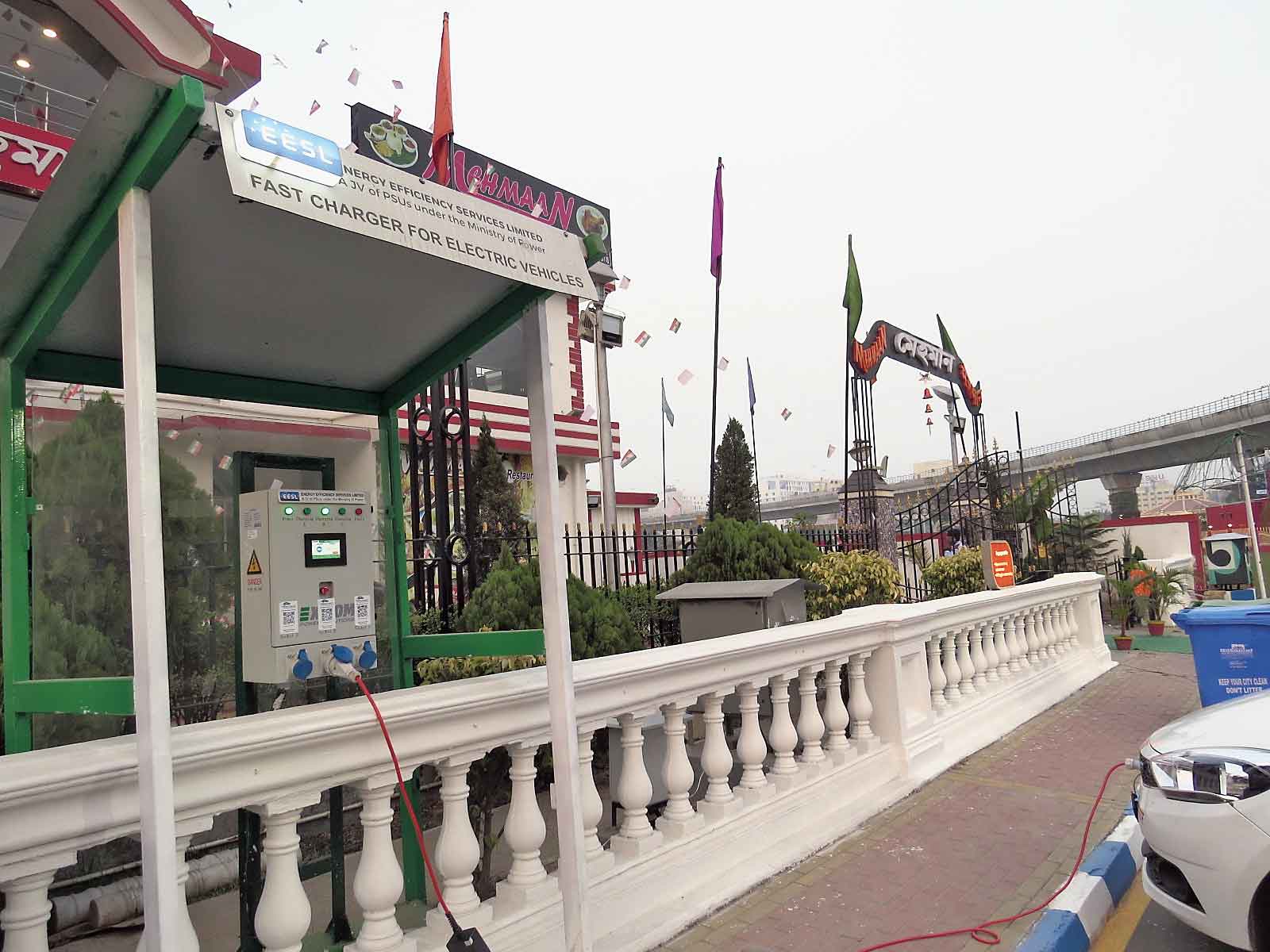 A car being charged at the electric vehicle charging station.
Sudeshna Banerjee

A person wanting to charge his e-vehicle needs to download the app ElectreeFi from Google Playstore. The app shows the locations where the EV charging stations are — there are 16 in New Town in eight locations, including one on Smart Street. On choosing the location, one needs to choose the type of charger, the Smart Street one being AC, which is slower than DC and takes three to four hours to charge a vehicle fully. An e-vehicle can run 100km on full charge. On typing in the vehicle registration number and the duration for which one wants to charge and pressing the start button, the app deducts payment from a digital wallet or a card. “For now, we are offering the charge free here, as a promotional drive,” said an official of Energy Efficiency Services. 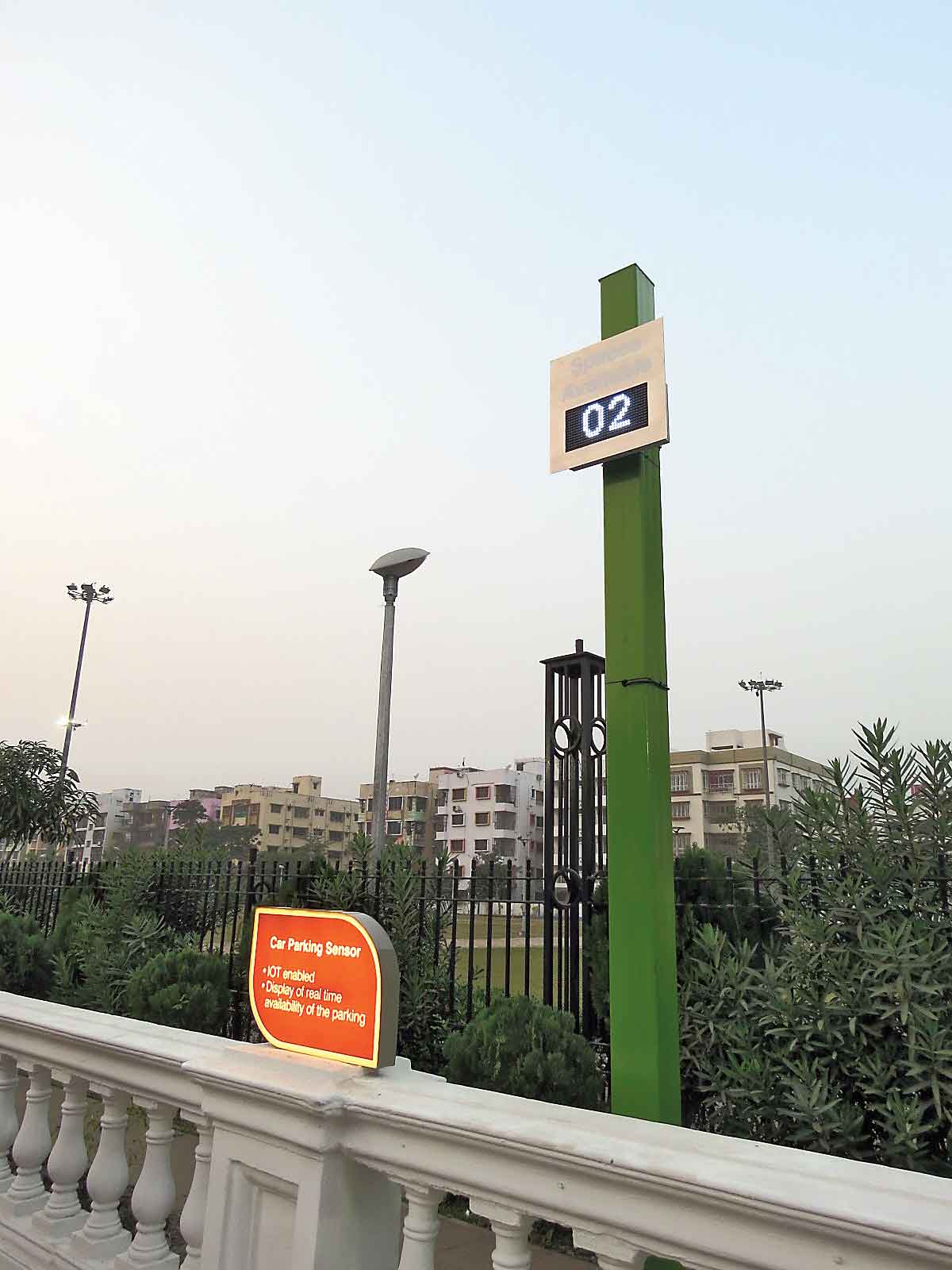 Five car parking bays on the street have been fitted with sensors and an electronic board connected to them displays how many parking spaces are still free. One can also prebook parking space on an app called Newtown Smart Parking. 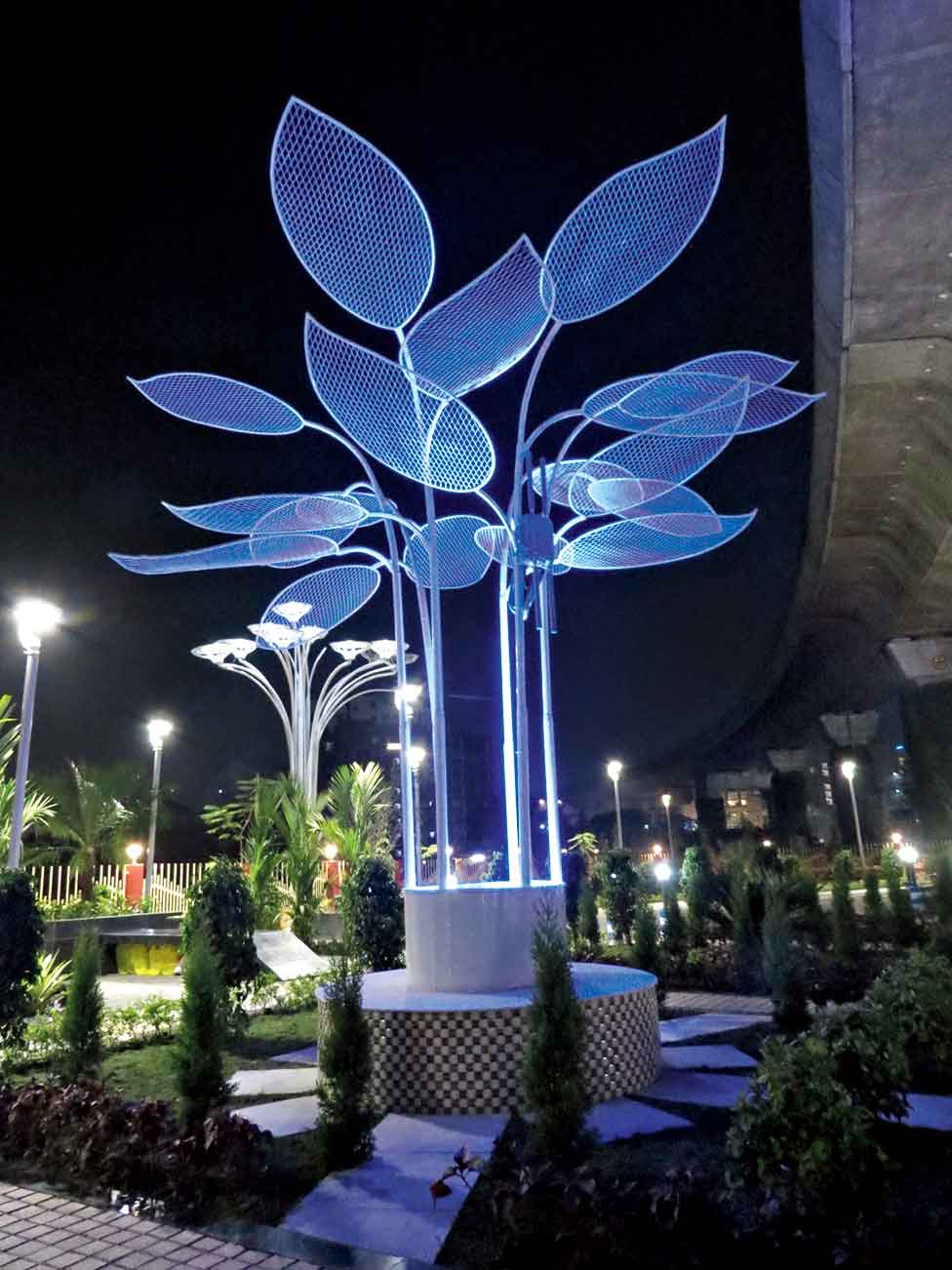 A wifi tree which creates a hotspot

Free wifi is available on Smart Street. A hotspot zone has been created through a tree-like structure that provides connectivity to Smart Street. The wifi password is mentioned on a board and will be changed periodically. 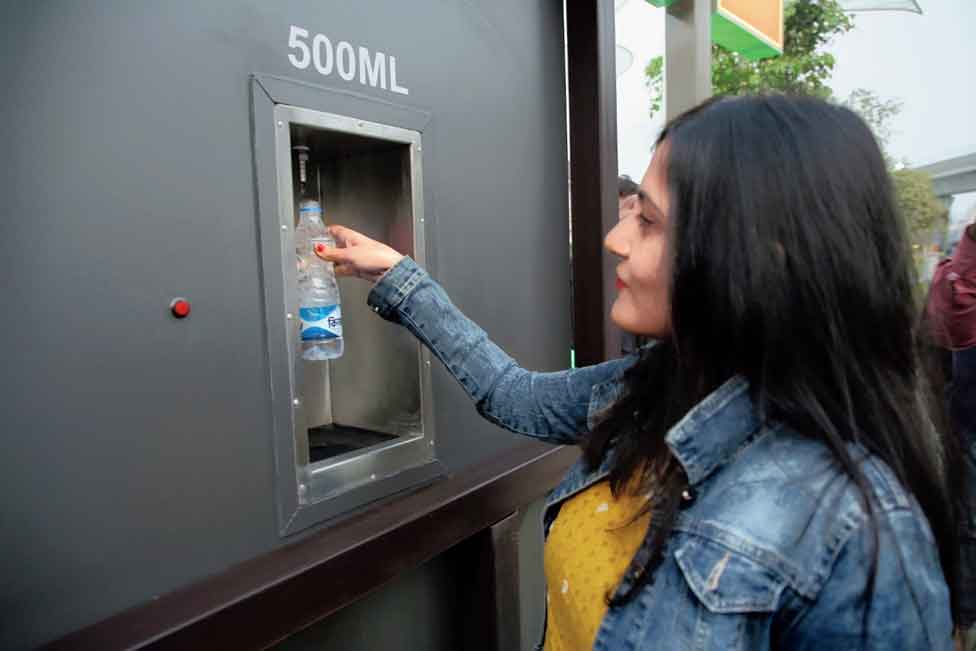 A drinking water dispensing outlet has two slots — 250ml and 500ml. There is no wastage as the flow stops automatically once the specified quantity is collected. Since it is IoT-enabled, it sends alerts to the start-up company maintaining the facility on the amount of water dispensed and if the quality deteriorates. One has to bring  a bottle to refill. There is no charge involved. The company has installed a similar machine at Eco Park. 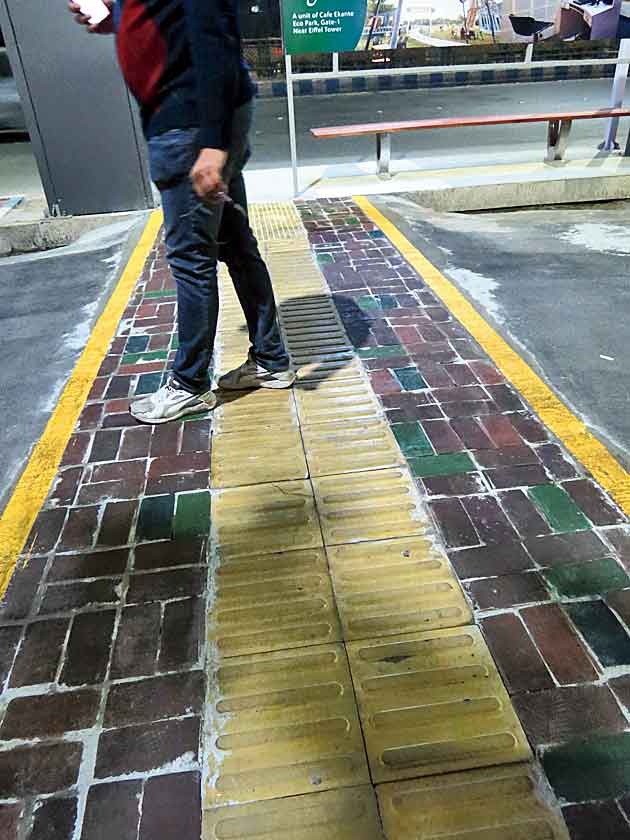 A barrier-free ramp made of plastic paver and tactile tiles.

Two ramps allow wheelchairs to travel from the adjacent smart bus shelter straight to the New Town fair ground or to the senior citizens’ park next to it. The ramp uses paver blocks created out of plastic waste. 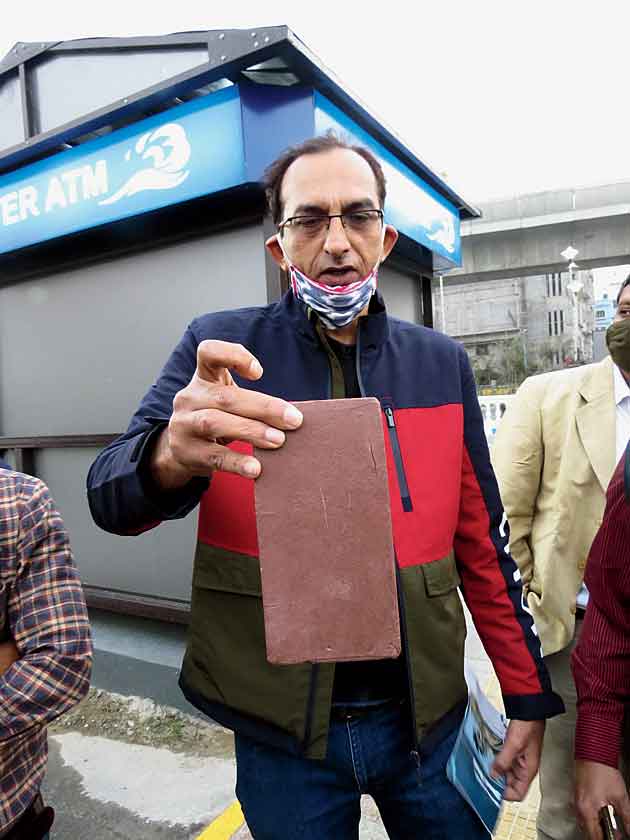 Asif Khan, a resident of Sunny Fort, displays a paver block using plastic waste that he has designed

Asif Khan, a resident of Sunny Fort, was provided 1,700kg of plastic by the solid waste disposal unit of NKDA from which he has generated 2,850 paver blocks, 200mm by 100mm in size and 40mm in thickness. “Each paver block has about 25 per cent plastic. They may be more costly than normal blocks but will last 50 years,” said Khan. “This is the first time paver block using plastic is being used in India,” added Sen. 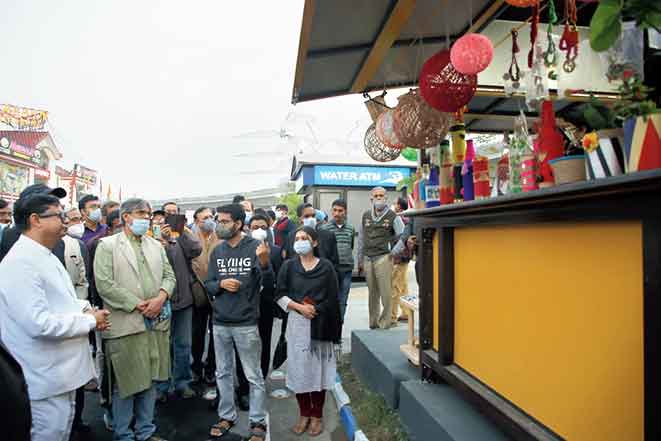 Artefacts made out of waste materials have been recycled and crafted into decorative as also utility items. The shop also collects clothes in good condition and upcycles them after proper cleaning. These are then sold at cheap rates, thus promoting recycling. 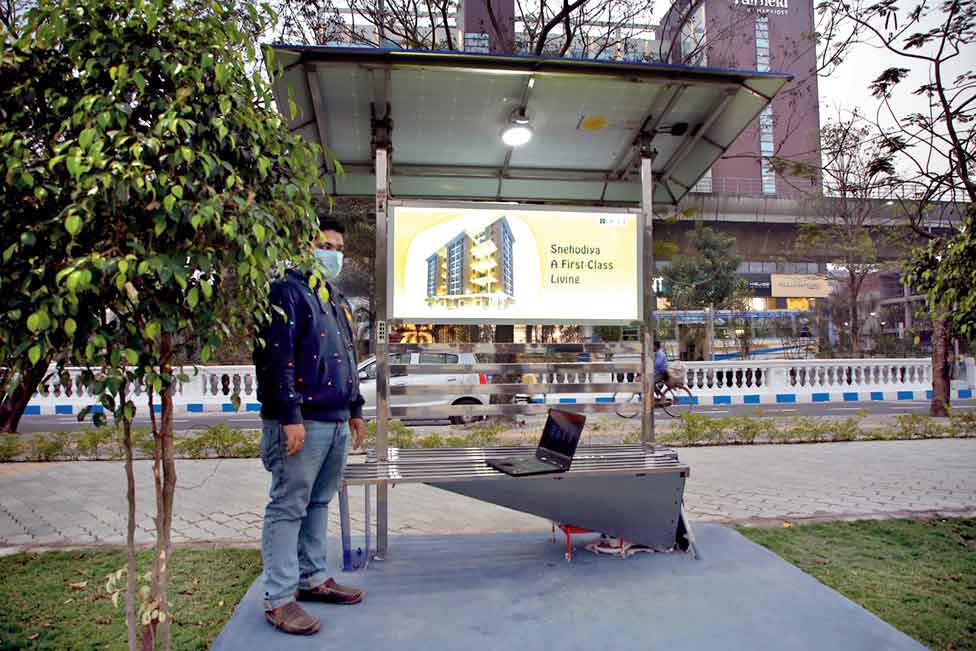 Three smart benches have been installed with solar panel generating 375kwp of power on their roofs and sensors on the bench. A 12W sensor-based lamp stays lit from 6pm to 11pm, but afterwards the light gets turned on and off automatically depending on when someone sits on the benches or get up. The solar panel provides shade to the bench. The lamp is lit by power from the electricity grid which in turn gets the power that the solar panels generate. It will save Rs 6,000 to 8,000 worth of electricity annually, an engineer explained. One can even charge one’s phone or laptop using the USB ports in each bench.

If one is ill or in danger, a panic button can be pressed which would send an alert to the integrated command and control centre which is being set up. Indeed, on the button being pressed, a message flashed on the official laptop screen: “SOS triggered at Mela Ground service road”. 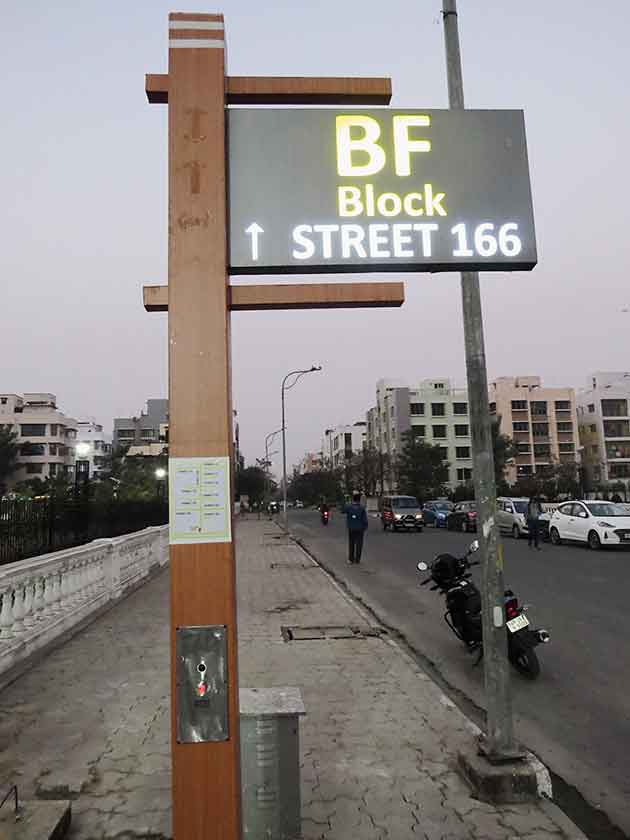 These street signs bearing the block name and street number are backlit and hence easy to spot at night as well. A map on the pole shows one’s location in relation to the surroundings. It also has a panic button. The person pressing the button can be seen through a pinhole camera. His location can also be understood at the control centre.

A battery stores power through the day and lights up automatically after sunset. It dims after 10pm to save energy but will brighten up if it senses movement below. They can be turned on or off remotely through software also.

An app cycle docking station has come up at the Swapno Bhor end of the stretch. 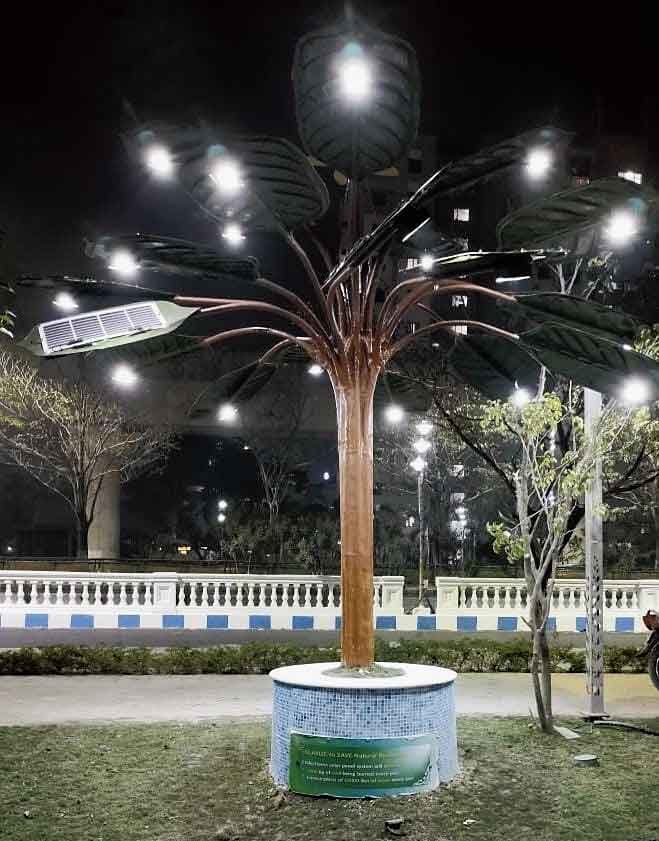 Five trees have been “planted” on Smart Street. A tree has 20 leaves under each of which there is a solar lamp, connected to sensors, that stays lit automatically from dusk to dawn. The solar panels are so thin and flexible that they have been given shape of banana leaves. They help reduce emission of seven tonnes of carbon dioxide in the air had fossil fuel been burnt to generate an equal amount of electricity. “At 3am, a sprinkler goes off to wash the leaves,” said an official of Agni Power and Electric.

The street has 1,886 solar studs embedded in it. These are lighting devices with flashing LED lights that delineate centerlines and edges of roads. Four hours of sun provide enough power to make them blink all night. Each polycarbonated stud can take 20 tonne load. “They help drivers, who might be sleepy at dawn, stay alert. We plan to install them all along the Major Arterial Road,” an official said.