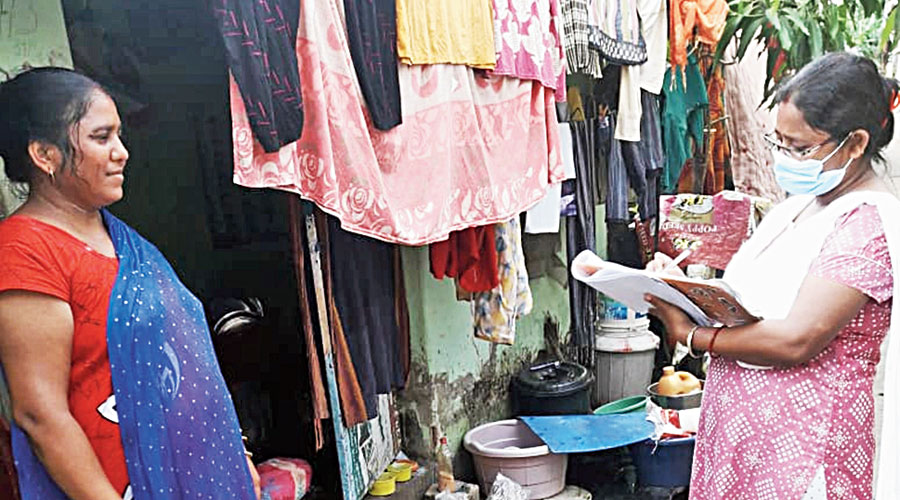 The uploading of data on the prevalence of comorbidities among Calcuttans, which was supposed to be done before Durga Puja, is far from complete, government and Calcutta Municipal Corporation officials said.

Only 67 per cent of the data collected during a survey in September from households across Calcutta have been uploaded on the server of the civic body, the officials said on Thursday.

Once the entire set of data of more than seven lakh people is uploaded, experts will do an analysis and deduce the number of Calcuttans suffering from comorbidities. “We have uploaded 67 per cent of the collected data, which is the data of a little more than five lakh respondents,” a CMC official said.

The CMC had initially targeted to finish the uploading before Durga Puja but the deadline was extended to October 31, said an official. It is unlikely that the remaining 33 per cent of the data would be uploaded by Saturday (October 31).

The survey was conducted to find out how many people are suffering from comorbidities like renal failure, hypertension, diabetes, cardiac diseases, cancer and chronic obstructive pulmonary disease. The findings will help the government further fine-tune its Covid response.

On Thursday, 61 people who had tested positive for Covid-19 died across Bengal, taking the death toll from the coronavirus disease in the state to 6,725. Around 84 per cent of those who died had comorbidities, according to the state health department.

Officials said that once the people suffering from comorbidities are identified, the government would be in a position to monitor their health on a regular basis. If such a person tests positive for Covid, he or she will be asked to get admitted to a healthcare unit to prevent the condition from turning critical.

A state government official said they had requested the CMC several times in the last couple of weeks to complete the uploading of the data so the analysis could start. “The data uploading process is very slow. Only four to five per cent of the data is being uploaded daily,” said an official of the state government.

The comorbidity survey had taken place between September 7 and 30, during which data of nearly 7.5 lakh people were collected against the target of 8 lakh. “One reason for such fast collection of data was that several agencies were involved in the survey,” an official said.

But the data is being uploaded from each CMC ward by data entry operators. “Each ward has one operator,” said an official. “The operators have numerous other tasks like entering the data on Covid patients in their respective wards, entering the data on distribution of medicines to family members, uploading data on dengue surveillance and Covid-19 surveillance programme. So it is taking some time,” said a CMC official.

“Also many of the operators got infected with Covid-19 and work got stalled. Others filled in for them but the pace got delayed by two weeks or so,” said the official.

A health department official said the CMC should have deployed more people or hired some agency.