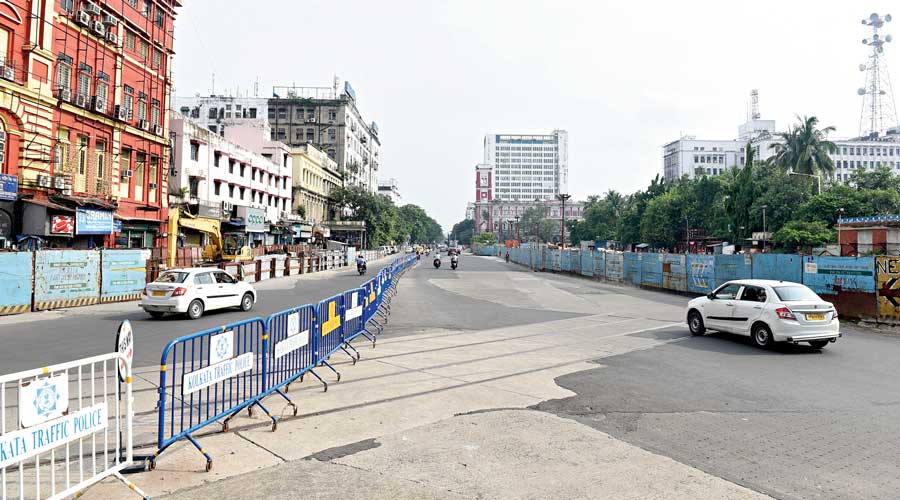 Deserted pavements, shut stalls and negligible traffic on the road, the Covid-19 curbs have left an indelible impact on what used to be one of the busiest parts of the city, Dalhousie.

A tour of the area — better known as office-para — on Friday afternoon seemed like a different world.

Office-para is inseparable from the hundreds of food stalls that dot its pavements. The spread is a testament to the cosmopolitan nature of the city, or so it was before the pandemic. From biryani to dosa and from machh bhaat to pasta, everything was available at the food stalls.

On Friday, The Telegraph found less than a third of the stalls open. One of them was behind the high court on Old Post Office Street, selling rotis and four types of curries. A couple of people had lunch at the stall during the 15-odd minutes The Telegraph spent there.

The owner, Muhammad Kalim, said the footfall had dropped substantially.

“The fact that I am able to talk to you for a long time on a weekday afternoon says everything. On a usual weekday, I don’t have time for even a cup of tea between 1pm and 4pm,” said Kalim.

Before May, he needed 40kg of atta daily to make rotis. Now, he hardly needs 12kg.

Three out of five stalls were shut in the high court area. The owners of the few that were open echoed Kalim. The footfall was so low because only a few litigants were arriving at the court, they said.

“Trains and buses are suspended. How will people come? Only litigants of emergency cases are coming. Otherwise, it is just lawyers and clerks and court staff,” said Biswajit Maiti, a tea seller down the same road.

Around one kilometre away, a biryani stall was among the few that had opened at Fairlie Place. “The running customers, our backbone, are almost gone,” said Subhajit Das, the owner’s son.

Surjyakanta Ghosh, who sells sweets on RN Mukherjee Road, said many offices had reopened but the employees were turning up in rotation, once or twice a week.

He needed 8kg of chena to make sweets before the curbs were announced. Now, he needs barely 3kg.

One or both flanks of roads, the usual parking spots in the Dalhousie-BBD Bag area, were far from empty. The reason — a large section of people coming to work are using private vehicles. Many others are sharing a car. Around 1pm on Friday, both flanks of Esplanade Row West were choked with parked vehicles.

Most of the cars belonged to people who had work to do in the Small Medium Enterprises City Credit Centre (where business loans are processed) of the State Bank of India and Calcutta High Court, a stone’s throw away, said parking attendants.

Most of the cars pay a monthly fee to the vendor, who collects the amount on behalf of the civic body. “Our income has gone down because cars other than the ones that pay a monthly fee are missing,” said Abhimanyu Nayek, one of the attendants.

The Bankshall court compound, which used to be crowded with litigants, lawyers and court clerks before the curbs were announced.
Gautam Bose

Nayek, from Habra in North 24-Parganas, has been living at Babughat since the suspension of local trains. He spends most of the day on the road and sleeps the night on the landing berth of the ghat.

Private offices have been allowed to resume with 25 per cent of the workforce from 10am to 4pm.

The expansiveness of the pavements of the office-para is usually lost on people because they are overcrowded. Not now.

Around 1.30pm on Friday, a pavement along Church Lane had less than 15 people. Only a tea stall and a couple of eateries were open. Usually, there are at least 20 stalls, selling tea, food, fruits and cigarettes.

Fruit sellers wait for customers on the pavement outside the Eastern Railway headquarters at Fairlie Place.
Gautam Bose

Across office-para, the cacophony made of the constant honking of cars and clamour of people was missing. The hawkers were few and far in between. Walking on the pavements, usually brimming with pedestrians and hawkers, was like a breeze.

Around 1.45pm, the pavement along GPO was deserted. Three men sitting on plastic chairs on the pavement outside the Reserve Bank of India looked expectantly at every pedestrian, waiting for someone to ask for small change for a Rs-500 or Rs-2000 note.

“Demonetisation had sent us to the ICU. The pandemic has landed us in a coma,” said one of three, a 65-year-old man who did not want to be named.

On the pavement in front of the New Koilaghat building of Eastern Railway, Muhammad Kamal, another hawker, was sitting idle. Kamal sold new and repaired old umbrellas and belts.

“Since morning, I have repaired only a couple of umbrellas,” he said. Before the pandemic, he earned Rs 500-600 almost every day. Now, it is Rs 200 on a lucky day, said Kamal, who walks to Dalhousie from his home in Howrah’s Pilkhana, around 3km away.