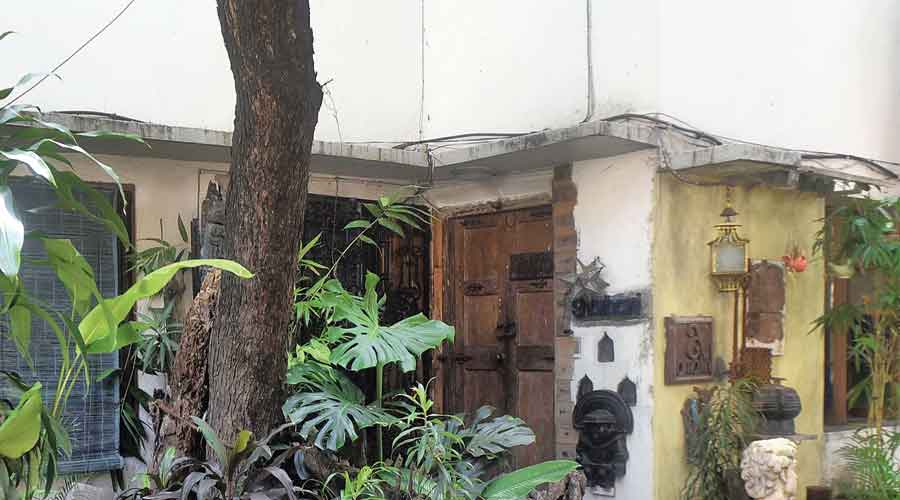 Fashion designer Sharbari Datta was found dead in the ground floor washroom of her Broad Street home late on Thursday night. She was 78.

Police said they would be able to comment on the cause of death only after they receive the post-mortem report in the next three to four days.

Police sources privy to the preliminary post-mortem findings said it appeared to be a case of stroke.

Datta is suspected to have died early on Thursday morning. She was found dead more than 12 hours after she passed away when her daughter-in-law went downstairs to look for her. Before that, Sharbari’s granddaughter had tried in vain to reach her over the phone.

While Datta lived in the ground floor, her only son Amalin Datta, daughter-in-law Kanaklata and the couple’s two children stayed in the first floor of the house on  Broad Street.

Datta, daughter of renowned Bengali poet Ajit Dutta, was married to Alokemoy Datta who passed away a few years ago.

Sources close to the family said Datta and her son had a strained relationship, and she was allegedly “coerced” to give her eponymous menswear label “Sharbari” to him. She had started a new label, Shunyaa, with a sprawling store in Hindustan Park but that business shut down during the pandemic.

“… the pandemic made her go into a depression. Her shop had to be closed, her production had to be halted and without any occupation, the loveless situation was gnawing at her,” Ananya Chakraborti, Datta’s friend and chairperson of the  West Bengal Commission for Protection of Child Rights, wrote in a letter to joint commissioner, crime, of Calcutta police Murlidhar Sharma.

Datta had not stepped out of her room on Thursday for breakfast, lunch or dinner. Her son and his family said they thought she was not home at all.

“This is absolutely a normal practice in our home that she would step out without informing us. So there was no question of getting worried when she did not appear for her brunch or dinner. We thought that since it was Vishwakarma Puja, she was out visiting her units. But when it was quite late and we were about to lock the main gate like we do every day, we called her to ask when she would be back. We made multiple calls which went unanswered,” Datta’s son Amalin told Metro.

Amalin said they had a common kitchen in the ground floor. He said he last saw his mother take dinner and retire in her room on Wednesday night.

Around 11am on Thursday, one of their household staff apparently saw through an open window of Datta’s room that the bed was empty. “We presumed that she had gone out. Then around 3.30pm, when another staff member reminded my wife that she (Datta) had not come out of her room even for her lunch, my wife had opened the door of her room in the afternoon and seen that the lights were off and the bed was empty, just the way she keeps when she goes out,” Amalin added.

He said even when the room was locked, he, his wife and Datta knew a way to turn the handle so that it could open the door without any key.

Amalin said they tried calling her thrice in the day but did not receive any response. Several hours later, around 11pm, when it was time to close the main gate, the family called her again.

With no response, Amalin’s wife Kanaklata entered Datta’s room. “Kanaklata switched on the lights…. Then my wife found my mother in the washroom,” he added.

The family called their physician who advised them to take her to a hospital, Kanaklata said. They called several relatives after that and finally Karaya police station. That call went around 12.40am on Friday.

She told the police that her mother-in-law had fallen and that she needed help to rescue her.

By the time a team of officers reached her home, Datta had been removed from the washroom and laid in the drawing room, the police said.

Datta was taken to the Calcutta National Medical College and Hospital, where she was declared dead.

There was a cut on her toe,  which could have been caused by a broken bathroom floor tile where a bloodstain was found, the police sources said.

Several questions have emerged surrounding the circumstances of her death and her estranged relationship with her son.

In her letter to the police officer, Chakraborti, the child rights panel chief, wrote: “Sharbari Datta was a dear friend…. She had confided in me several times… how they (son and daughter-in-law) had taken away everything from her, her wealth, her property, her brand and was paying her a small allowance… She also said how she had been coerced into signing off everything in the favour of her son and daughter-in-law. While narrating her plight, she would often break down uncontrollably.”

She added: “To be oblivious of her state lying unconscious in the same house for over 15 hours speaks volumes about the neglect and emotional abuse that she must have been going through.”

Datta’s son said it was a “huge shock” for him to lose his mother and the person with whom he had worked on so many projects.

“Last week only we all went to Santiniketan to draw up a plan on how to develop a property. Everyone was so happy to see us together,” he recalled.