Santa lands with gifts for kids in two villages

Most of the children, who are Muslims, received new clothes, cakes and stationeries from a group of Jesuit priests from St Xavier’s College, Calcutta 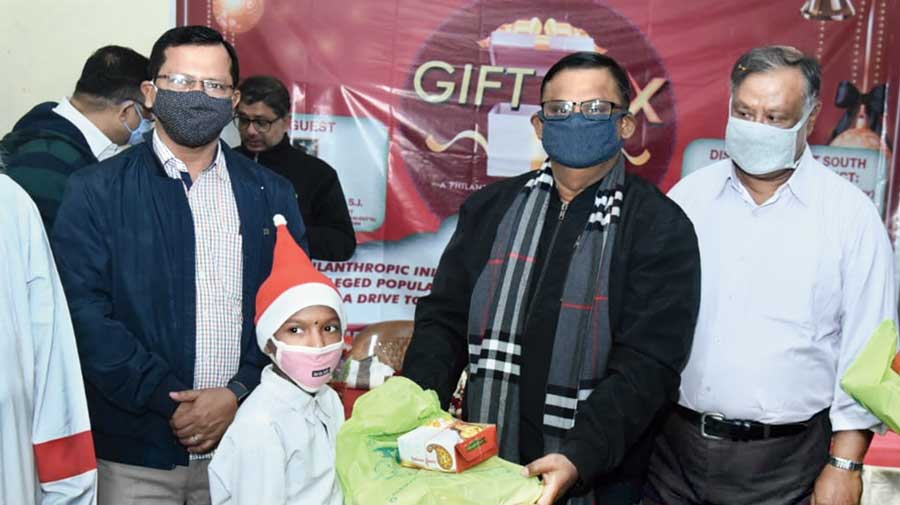 Santa came calling on hundreds of underprivileged children in two pockets on the southern fringes of the city on Sunday, days before the festival that celebrates the spirit of giving.

Most of the children are Muslims. They received gifts — new clothes, cakes and stationeries — from a group of Jesuit priests from St Xavier’s College, Calcutta. The drive was organised by the association of former students of the college, most of whose current members are Hindus.

A team of volunteers from the St Xavier’s College (Calcutta) Alumni Association, led by Father Dominic Savio, the principal of the college, and a couple of other priests, was part of the drive on Sunday morning.

The team’s first stop was Pailkahala village in Nepalganj, South 24-Parganas, around 40km from the heart of Calcutta. The alumni association has been running a free primary school in the village since 1999.

Around 100 children who are students of the school were given new clothes, cakes, chocolates, pencils and notebooks. Over 100 residents of the village, parents of the students, got blankets, mosquito nets and hand sanitisers.

“The true celebration of the birth of child Jesus has to be with the children, especially those who are less privileged, as Jesus himself was born among the poor. Santa has, this time, brought a permanent gift to the children of the village as the efforts are on to upgrade the school,” said Father Savio.

Pailkahala is a Muslim-majority village. Before the Covid-19 pandemic, many villagers worked at garment manufacturing units, in Metiabruz and adjoining areas as well as in other states. The pandemic had forced the closure of many units, posing livelihood challenges to the residents.

“The school now is till Class IV. We are planning to upgrade it till Class VIII and introduce meals for the children once the school resumes. We are committed to the all-round development of the children,” said Firdausul Hasan of the alumni association, who was part of Sunday drive.

The team’s next stop was a rural campus run by the college at Raghabpur in South 24-Parganas.

Around 150 students of the Raghabpur campus also got new clothes, cakes and stationeries.

“We need to help Jesus in the helpless, who are knocking at our hearts. Christmas prompts us to do loving things – not only to those we love, our families and friends, but also to reach out to those who have nothing to celebrate because of their sad and desperate situations,” Father Savio said at Raghabpur.

Sanjib Koner, the secretary of the alumni association, said “the gift boxes gave us the scope to become secret Santa Claus”.