Business back on track, almost 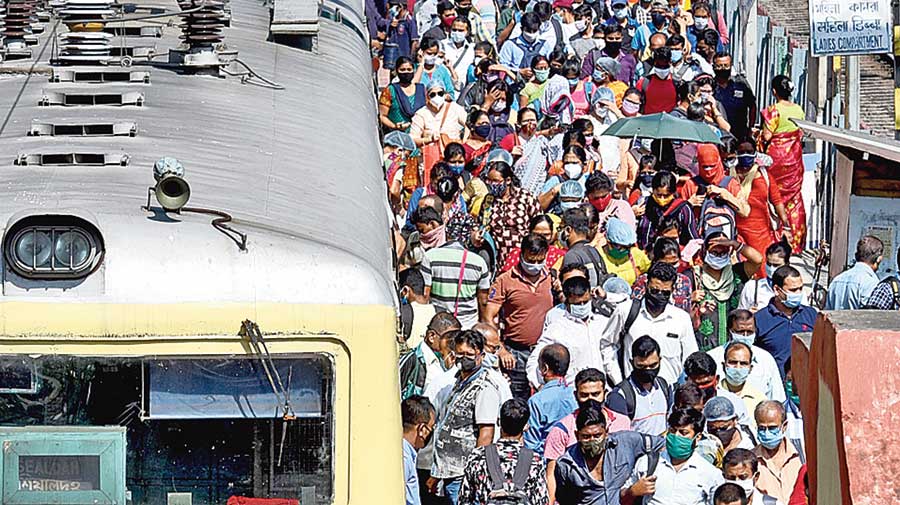 Local trains are back. It’s been about a week now that passengers from the districts have been hitching rides to reach their workplaces in Salt Lake, Sector V and New Town by alighting at Bidhannagar Road railway station in Ultadanga.

But even though trains have always been a vital mode of connectivity, nothing is quite the same in this post-lockdown world. Many employees are working from home, others have purchased bikes and cycles… The Telegraph Salt Lake speaks to various stakeholders to explore what the return of the local trains means for the locality and how it has affected the situation.

Return of the crowd

A year ago, the only thing visible on the footpaths of Ultadanga during rush hour was a sea of heads. Pedestrians would walk shoulder to shoulder on the footpath and eventually spill on to the road. Traffic policemen would constantly herd autos back into their designated lanes so the majority of the road would be free for buses. Buses on their part would come from all over the city and empty out at the station.

While the place is no longer as crowded as before, Ultadanga is busier now than it was a fortnight ago. Rush hour trains are once again pouring out thick crowds, even though off-time trains are going emptier.

The government offices under the Metro viaduct too are seeing lots of visitors. “I’m not sure if it the effect of trains, but hundreds more have come today compared to a week ago. Many are eating my rolls and chowmein,” said Ganesh Majumdar, who runs a food stall outside Purta Bhavan, on Wednesday.

The Sourav’s restaurant outside the railway station had shut in March and opened last week. “Before that, this street was deserted like a containment zone. I got the confidence to open up only after learning that trains were resuming,” said the owner Sunil Daga.

Even then, the footfall isn’t enough for him to resume his Chinese and south Indian offerings. Only sweets and savouries are on sale now. “Time was when passengers used to hang like bats from crowded buses and alight in front of my shop, hungry and thirsty. Now people are working from home, are commuting by cycles and bikes or have lost their jobs altogether. They cannot afford to eat out. Even on my menu only my cheapest sodas are selling. No one is buying costly lassis any more.”

Rintu Mistri, who sells tea at the exit of the station, used to open up for just a couple of hours till last week. “But now that trains are back, I’m keeping open from 7am to 8.30pm. Thereafter there is no footfall but at least I can earn a buck or two during the day.”

Bikas Mullick reopened his clothes stall outside the station a week before trains resumed and has noted that sales have risen by about 10 per cent since then. “I’m selling winter clothes now. Sales aren’t great but they would have been way worse without the railway crowd,” he said.

Sukanta Nayban lives in Lakshmikantapur, and had work at Bikash Bhavan that he had been putting off for months due to the absence of trains. “A bus journey would have meant an almost three-hour-long break journey. The train is much easier, although I was quite alarmed seeing the crowd at the station,” he said, having made the trip on Tuesday.

Rupa Sarkar of Santipur, Nadia, said her husband had to hire cars several times before trains resumed, to reach the government offices near Karunamoyee. “It meant a four-hour drive and Rs 1,500 fare,” said Rupa. “Even though our work did not get done today at least it will be easier returning by train.”

Without trains, several members of the staff at Bikash Bhavan had been staying back at the office through the week and hitching bike rides home on weekends.

“With the trains back on track now we go home daily ,” said the security guard posted outside the building.

The supply chain of goods sold by shops and hawkers has got smoother with the trains plying.

P.R. Choudhury, who sells flowers at EC Market, is relieved with resumption in service. “So long suppliers would send 10-15kg of flowers by bus from Howrah. It was cumbersome, especially on Puja days when our demand would soar to 50 or 60kg. It wasn’t possible to carry so much by bus so they would hire taxis. The cost escalated, of course,” he said.

But flowers for Kali puja could be sent conveniently by train. Large scale fruit and vegetable vendors said they ferry their products by lorries but those like Kishan Kandar, who sells bananas outside the station, can now leave aside his cycle and use the train to get his fruits from Mechhua.

Chhoton Biswas would have to cycle to Fancy Market to get mobile accessories for his stall. “It would take hours, I would feel dizzy and worst of all, I couldn’t return in time to open the stall. The train has eased the process again,” said the man who sells outside the station.

Trains in place of buses

Auto drivers were expecting to laugh all the way to the bank ferrying passengers to and from the railway station but that hasn’t quite played out as per plan.

“If we were doing two trips before the trains we are now doing five or six, but it’s still a hand-to-mouth survival,” said Dulal Das, who plies his auto from Ultadanga to anywhere in Salt Lake. “The reasons are many. Firstly, everyone is trying to cut costs.”

The reason passengers preferred autos over buses is because they would be guaranteed seats. “Now when buses are near-empty why would passengers pay more and ride autos?” Das reasons.

Bapi Sarkar, driver of a bus on the 201 route, said he was prepared to see a fall in passengers once trains started. “A bus ride from Belghoria to Sector V takes an hour and half whereas a train ride takes 20 minutes. Why will anyone take our bus now?” he asked.

Autos and even buses at Ultadanga and Karunamoyee claim that their top destination during office hours used to be Sector V. But now, instead of luring customers by shouting: “Sector V, Sector V!” they are shouting “Bikash, Bikash!” referring to  Bikash Bhavan, the government office near Karunamoyee.

“Sector V is now a ghost town,” said Gobindo Singha, a driver on the Karunamoyee-Ultadanga route. Most are working from home and some have fixed carpools on a monthly basis to and from office. The trains started mid-month and it will not be possible for these passengers to discontinue the carpool arrangements before the end of the month or maybe the year. That’s what we are pinning our hopes on.”

Another auto driver Kousik Bhattacharya admits passengers have increased after trains resumed. “But drivers are still not making more money. This is because more than passengers, it is autos that have increased on the road,” he laments.

For months only 10 out of the 40 autos on the Ultadanga-Salt Lake stand were plying. The rest of the drivers sold fish, fruit or returned to their villages and started farming. “But now that trains have resumed everyone wants a share of the pie and 35 to 40 autos are now hitting the road since last week,” Bhattacharya explains. “There aren’t enough passengers to fill so many vehicles.”

Many auto and bus drivers said passengers had in fact reduced after trains began but there is an explanation for that too. “It’s been vacation time since the trains resumed — Kali puja, Diwali, Bhai Phonta, Chhat puja…. Government offices,  which is the most popular destination of passengers now, have been shut. We will need a couple of more weeks to assess the effect of trains on our business,” said auto driver Prasanta Mondal.

Bapi Sarkar, a driver of  a 201 route bus, agrees with this holiday theory but laughs at changing fortunes. “Back in the day the concept of even weekly holidays was alien to Sector V folk. Our buses would be just as full on Sundays,” he sighs.

Bishu Mondal, the starter (time keeper) of 215A bus route from Sector V to Howrah recalls how their first buses would set off at 3am. “All the seats would get occupied by the time we reached College More, a few hundred meters away,” he recounts. “Back then, our buses would set off every six minutes but now they are not filling even after 15-minute intervals.”

The Sovabazar Sutanuti Metro station on their route has no draw either. The East West Metro trains from Wipro to Phoolbagan are going next to empty.

Mihir Ghosh, route secretary of Karunamoyee-Phoolbagan autos, is down but optimistic. “People are now less paranoid about Covid and are gradually stepping out. They will eventually take trains and come to work,” he said.

The AS 3 bus route from New Town to Garia railway station has raised its fare from Rs 13 to 20 to compensate the lack of passengers in the past months. “But with the trains returning, we believe the crowds are not far behind. Then we can reduce the fare again,” said starter Bubai Karmakar.

Auto driver Raj Kumar, in between shouting “Salt Lake and Bikash!” outside the Ultadanga station, once in a while still cries out “Eco Park!” “It’s winter and sooner or later, I’m sure the crowds will return to the park,” he said. “I can ferry them there for Rs 200.”