Travel time up by 90 minutes near airport 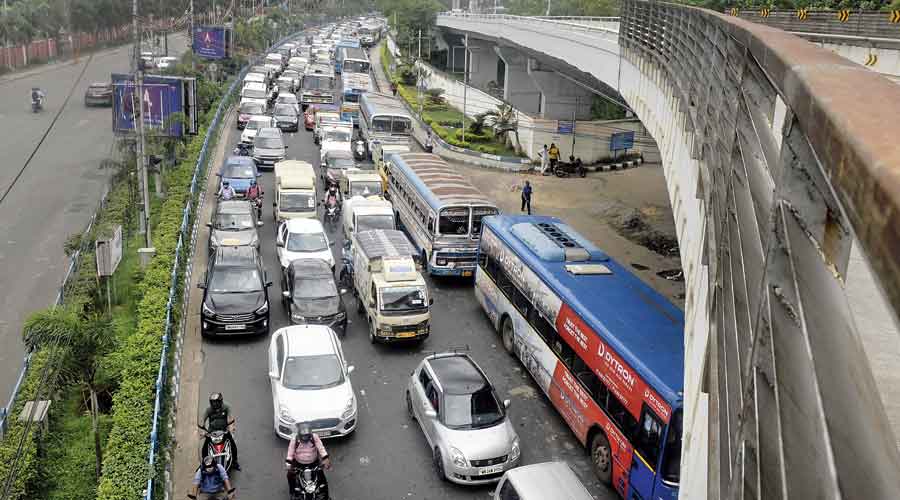 Vehicles crawled on Belghoria Expressway, Jessore Road and the airport’s slip road on Tuesday, a day after the total lockdown, because of a heavy rush and innumerable potholes on the roads.

Vehicles, including two-wheelers, headed to the city from Barasat, Dakshineswar, and Madhyamgram via Jessore Road or going to these places were caught in the jam that added at least 90 minutes to their travel time.

Near the airport, a combination of craters, construction materials lying by the roadside and crash barriers triggered traffic snarls during the morning and evening rush hour.

Motorists and two-wheeler riders headed towards Belghoria Expressway as well as to the city from the expressway face snarls almost every day because of potholes on Jessore Road. Trucks and other heavy vehicles add to the problem.

Sandipan Chakraborty, a resident of Barasat who was headed to the city, said it took him more than an hour from the airport’s Gate No. 2.5 to reach the flyover that connects Ultadanga to the Bypass.

The distance from the airport to the flyover is around 9.7km and it takes around 25 minutes on other days to cover the stretch, he said.

Cops had requested the agencies maintaining VIP Road and Jessore Road to repair them, anofficer of the Bidhannagar commissionerate’s airport traffic guard said.

“We requested them to do patchwork repairs… they have done that on some stretches. There was a huge rush of vehicles today (Tuesday) and coupled with the potholes there were snarls despite our best efforts,” the officer said.

Jessore Road is in bad shape though it has been widened. The police deployment at the airport’s Gate No. 2.5 and No. 1 is sufficient but there is little effort to regulate traffic, according to regular commuters.

“They just stand there and wave at vehicles. Is that traffic management?” Triparna Sinha, who lives in a complex along Jessore Road, asked.

The T-junction at Gate No. 2.5 chokes as soon as there is a heavy rush of vehicles, Sinha said. Many people now enter the airport complex through the flyover instead of going through the chaos on the slip road.

They take the road in front of Airport police station to reach Gate No. 2.5 from the opposite end and add to the congestion there. The police and civic volunteers, at least six on each shift, stand and watch, another regular commuter said.

The lack of police intervention at the junction where traffic lands on Jessore Road from Belghoria Expressway via the flyover is another reason behind the snarls.

The public works department maintains VIP Road and Jessore Road near the airport.

A PWD engineer said the agency had done patchwork repairs multiple times on these roads.

“We even did patchwork repairs on Jessore Road on Monday as there were no vehicles because of the total lockdown. But a combination of rain and heavy vehicles on these roads damage the repairs. We will again repair the stretches where potholes have reappeared,” the engineer said.

Both roads need to be resurfaced and patchwork repairs are a temporary fix that will not last long, the engineer said. “We are planning thorough repairs on VIP Road and Jessore Road before the puja.”