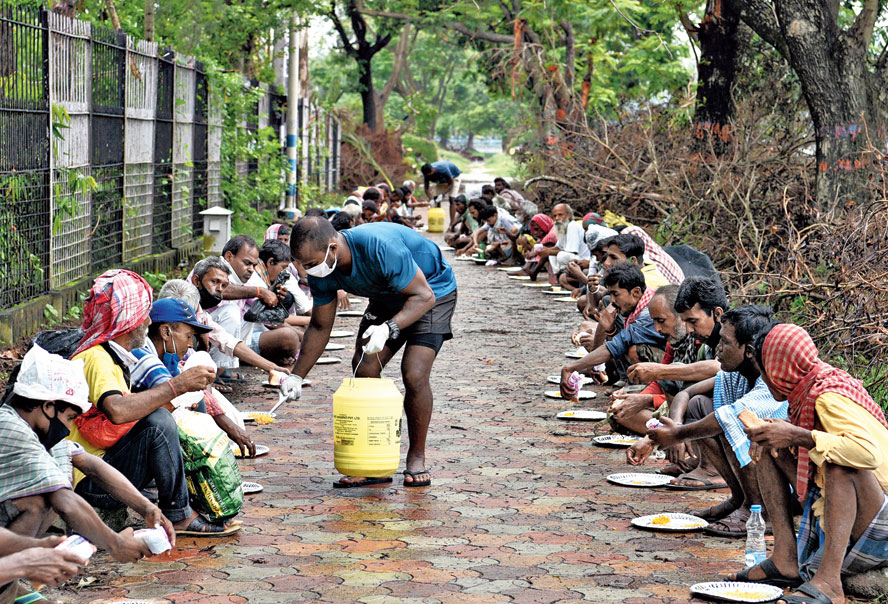 Over 100 people waited, in the middle of a persistent drizzle on Tuesday afternoon, near the Mohammedan Sporting Club tent on Red Road.

Their eyes lit up around 2.50pm, on spotting a couple of cars and two-wheelers.

A handful of youths, led by a man in an azure tee and shorts, got off the vehicles and got to work immediately.

With an efficiency that comes with days’ of experience, they ensured that the people formed a disciplined queue before distributing food to them.

The man in charge was Shailen Tudu, who, not so long ago, sported the India rugby shirt. The former player, now a fitness trainer, promotes the sport, especially among tribal children.

For 85 days, his afternoons have meant feeding poor people around the Maidan. The number was 10 on Day 1 March 24. It has been over 300 for the past several days.

“I realised more people would die of hunger than the virus. I started with only some people around the Maidan, my second home. The scale of the campaign kept growing. I have many friends who helped me sustain this for so long,” said Tudu, who went to the UK on a rugby scholarship in 2008.

When Metro visited Red Road on a wet Tuesday afternoon, around 2.40pm, over 100 people were waiting.

The people waiting included contractual labourers, sellers of nimbu paani, mutiyas (people who ferry loads on vans) — all hit hard by the Covid-19 curbs. Many of them, forced to vacate their old shelters, now spend the nights around New Market and Esplanade.

“I have been coming here for lunch for over a month now. The help is a godsend,” said Kamal Mondal, an out-of-work labourer. The 40-year-old hails from Malda’s Chanchal and had been working in Calcutta for around seven years before the lockdown robbed him of his livelihood.

He said he could not return home because he did not have money.

The people waiting started waving at the cars.

The plates were distributed first. A police vehicle also ferried some food to be distributed by Tudu and his friends.

The days’ menu — a pound of bread and chholar dal for each, followed by rice, dal and a curry of seasonal vegetables.

Serving with zeal was Tudu, who hails from Bankura and came to the city in 2000. His rain-soaked shirt did little to hide his ripped abs. Bucket and a steel ladle in hand, Tudu kept walking up and down the queue at a brisk pace.

One of the friends was Anirban Kar, a lawyer at Calcutta High Court. “I was moved by Tudu’s efforts. I have a car and suggested we use it to serve more people,” said Kar, an Alipore resident.

On Wednesday, several cartons of food were brought out from the boot of his car.

“Our primary focus is the people living around the Maidan, because that is where my heart is,” said Tudu. The campaign has been feeding over 300 people over the past several days.

The cooking takes place at the kitchen of a Bhowanipore eatery. The distribution starts from 1.30pm. The volunteers stop at multiple spots around the Maidan, the last one on Red Road.

The best prize Tudu and his group have got so far — two Rs 500 notes from a Calcuttan.

The group was on AJC Bose Road when a man on a cycle came up to them. Tudu thought he was hungry and gave him a plate. The man said he was not hungry.

“I see you every day, feeding the poor. Please keep this small contribution from me,” Tudu quoted the man as saying before handing him the notes.