Gaping potholes suggest the roads were not built in a manner to withstand the type of rain the city gets: Experts 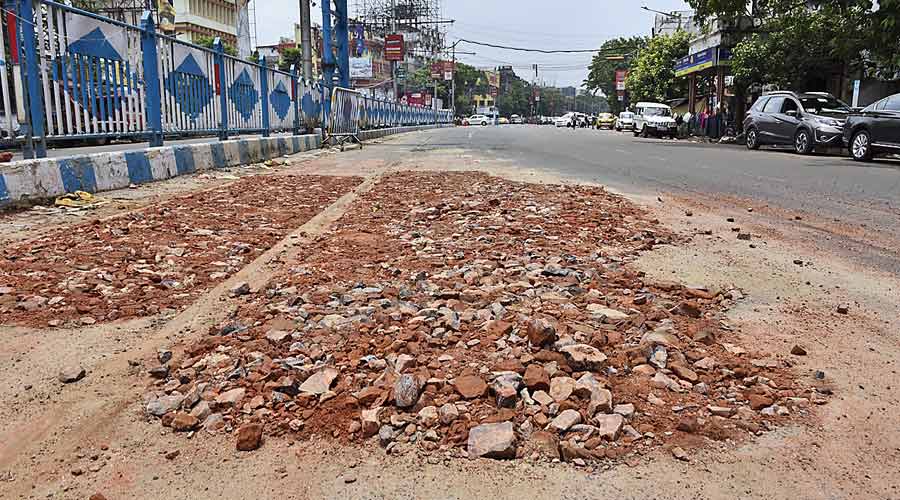 The Calcutta Municipal Corporation has drawn up a list of 132 roads that are riddled with potholes and need immediate repairs.

Immediate repairs in Calcutta means patchwork repair that does not last beyond a few spells of rain.

The gaping potholes suggest the roads were not built in a manner to withstand the type of rain the city gets, engineers said.

The water that had accumulated on some stretches seeped in because of irregularities in the process of compaction of materials that form the sub-base, the layer just beneath the road surface.

“The middle layer of the road, the sub-base, is very crucial. In most cases, irregular compaction in this layer results in subsidence,” said Partha Ghosh, of the construction engineering department of Jadavpur University.

“If this layer is not built properly, there won’t be regular distribution of vehicle load. As a result, there will be a settlement or depression. This can happen in any season.”

When water accumulates in these settlements during the monsoon, it begins to seep into the layer just beneath the road surface. This happens because bitumen is not waterproof.

Once water seeps into the middle layer of a road, it breaks the bond between different components of this layer. “When vehicle load is transferred from the top, this bond gets broken further and the components start to segregate,” said an engineer.

This results in the level beneath the top getting exposed, leading to development of craters. Once there is a crater on a road surface, the adjoining area becomes “distressed” and the road surface continues to weaken.

To ensure there is no depression on a road surface, the middle layer should be carefully done with sand, gravel and stone dust.

“The soil of Calcutta is soft and when the drainage system adjoining a road surface is not well maintained, accumulation of rain water becomes inevitable,” said Subhajit Sarawasti of JU, who specialises in geotechnical engineering. “Any patchwork on a relatively moist surface doesn’t last.”

“Patchwork repairs on some stretches have begun by covering the potholes with brick pieces. A layer of bitumen from our hot mix plant will then be put on the top,” an official in the CMC’s roads department said.

Experts said instead of using brick and bitumen, it would be better if these potholes are repaired with quick-setting cement.