Rise in number of Salt Lake hawkers amid job loss 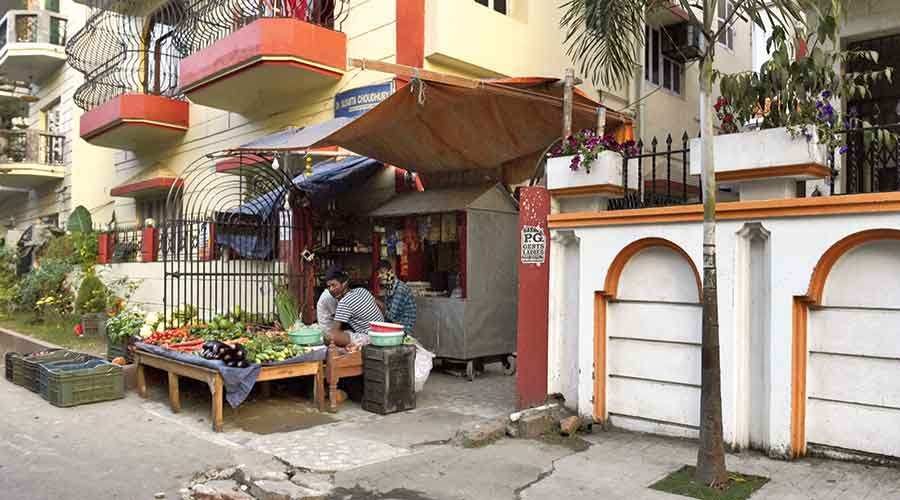 Hawkers in Salt Lake, who already took up the footpaths of the township, have now set up stalls on roads.

Several hawkers have also put up their stalls on the driveways or on the premises of houses whose owners don’t live there.

The number has shot up manyfold in the past few months because several who lost their jobs during the pandemic have had to take to selling vegetables and fast food.

A civic official said no eviction drive had been conducted in the past two years by the Bidhannagar Municipal Corporation.

Metro went around Salt Lake and spotted stalls on the pavements in Sectors I, II and III. There were stalls on the footpaths in Karunamoyee, opposite the Geological Survey of India building, in front of the Punjab National Bank rotary, lanes in several blocks like DL and EE, and the newly-renovated stretch along the Kestopur canal near AL Block. Stalls have sprung up in front of the CGO Complex and the East-West Metro stations.

Stalls on the pavement near the Geographical Society of India headquarters in Salt Lake.
Pictures by Bishwarup Dutta

This newspaper saw more than 30 stalls near the Karunamoyee intersection, one of the busiest in Salt Lake.

DL Block and the lane and the walkway adjacent to the headquarters of the Geographical Society of India, in DK Block, have a number of hawkers. A stall selling vegetables and tea has been set up on the driveway of a house in DL Block.

“The owner does not stay here. Our relative is the caretaker of this house so we have set up shop here,” said Shyamal Maity, who had set up the stall.

DL Block resident Amit Ganguly said that it gets difficult to walk or drive out of the block.“There are hawkers everywhere. Nobody from the civic body or the police comes to tell them to not keep their wares on the roads.”

A pice hotel has been set up in the courtyard of a house in CJ Block. “The owners don’t stay here.... We asked the caretaker and he said we could use the compound to run our hotel,” said the man at the shop.

A temporary market near Anandalok Hospital. The stalls had been removed from the stretch in 2017

Vegetable peels, fish scales and feathers from poultry lined a pavement opposite the Anandalok Hospital where over 25 stalls have been set up.

A resident of EE Block, who boards buses from the bus stop nearby, said it was difficult to stand there because of the stench. “After the day’s sales, most hawkers dump waste, including fish offal and guts, on the road giving rise to this unbearable stench. Something has to be done,” said Chandrani Bhattacharya, who works in Sector V.

The walkway in front of the CGO Complex, which houses several central government offices, had pice hotels, tea and paan stalls. Workers of the hotels were seen washing utensils and dumping food waste on the road.

Krishna Chakraborty, the chairperson of the Bidhannagar Municipal Corporation’s board of councillors, said that the eviction drives had stopped.

“We cannot evict them. We can only rehabilitate. We are trying to fix up an empty plot where we can construct a hawkers’ market. I don’t know why there is a sudden influx of hawkers here. We have not disturbed hawkers who had set up stalls in Salt Lake since the past many years but now there seems to be several new ones. I don’t know who is authorising them to set up such stalls. We don’t want to deny the opportunity of earning an honest livelihood now as many have lost their jobs due to the pandemic,” Chakraborty said.