Restoration of Sibtainabad Imambara on the cards

CMC to take up renovation of structure at Garden Reach 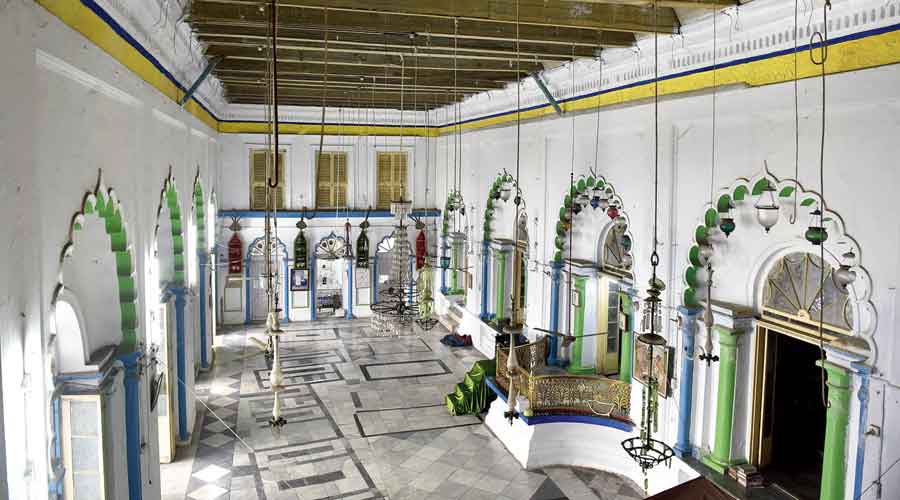 More than a century-and a-half ago, Nawab Wajid Ali Shah, built the Sibtainabad Imambara in Garden Reach after he was exiled to Calcutta from Awadh by the British.

The imambara, which the Nawab used to frequent, is crying for repairs now as water seeps from its creaking roof, there are cracks on its walls and the foundation has weakened.

Wajid Ali Shah is buried inside the imambara and his grave on the northern corner is a major draw for visitors to this Garden Reach heritage site. One of his sons, Birjis Qadr, is buried at the southern corner, the two separated by the large main hall of the imambara. 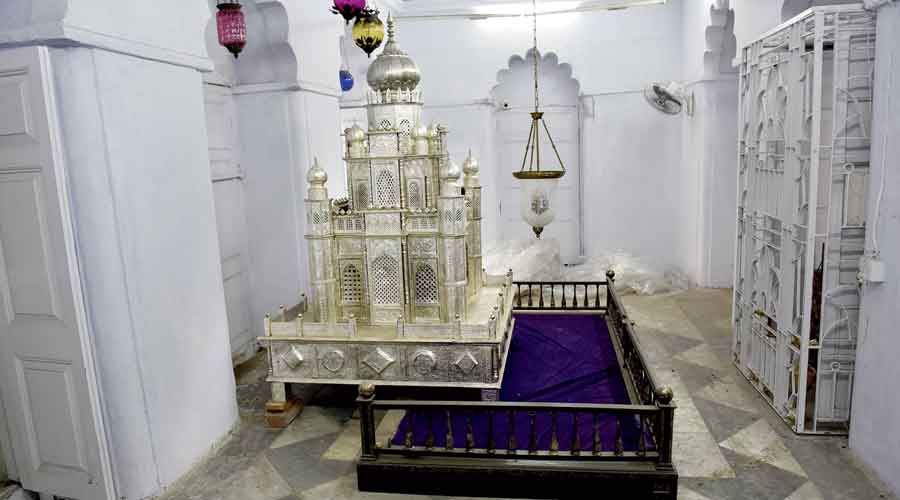 The grave of Nawab Wajid Ali Shah which has a replica of the tomb of Imam Husayn, the third Imam of Islam, placed above it.
Bishwarup Dutta

The Calcutta Municipal Corporation (CMC) has now taken up the much-needed restoration of the structure. The CMC has floated a tender to engage a consultant for the “renovation and restoration work of Sibtainabad Imambara” with a 450-day deadline.

“This is possibly the last of the long line of imambaras built by the rulers of Awadh, but far away from the boundaries of Awadh,” said Irfan Ali Mirza, one of the descendants of the Nawab and a current trustee of the Sibtainabad Imambara.

The imambara was built in the 1860s. There are doubts about the exact year of construction. 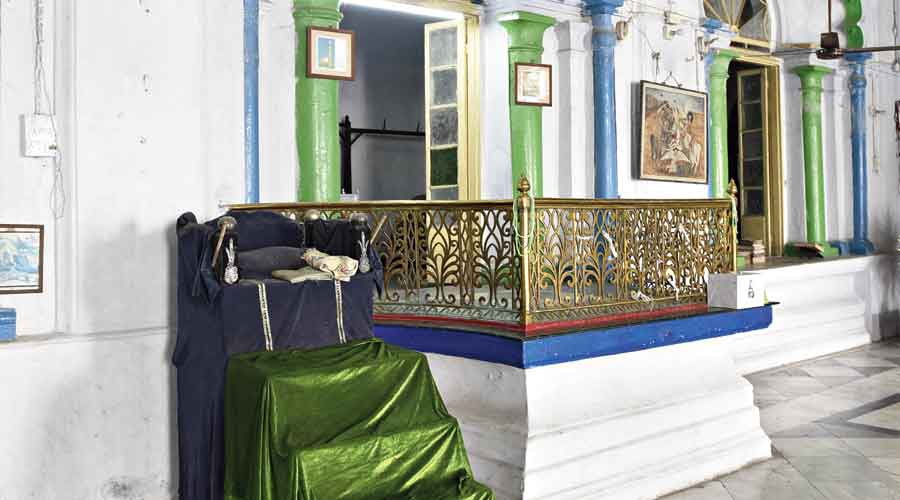 An exhibit at the imambara.
Bishwarup Dutta

Inside, there are objects and articles from the time of the Nawab. A replica of the tomb of Imam Husayn, the third Imam of Islam, is placed above the grave of the king. “This tomb was built during the lifetime of the king and he wanted that it should be placed above his grave after he died,” said Humayun Ali Mirza, another trustee.

There are balconies on the northern and southern ends of the main hall of the imambara. Humayun said women used to attend the congregations at the hall from the balconies above.

The floor of the hall and even the passage outside has graves of descendants of Wajid Ali. Black lines on the floor mark the graves that are below but the floor has become undulated because of structural weaknesses over the years. 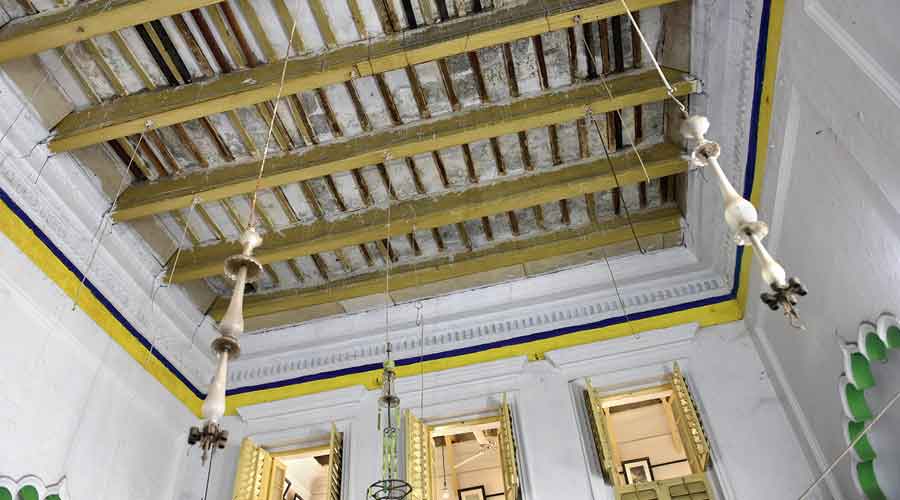 The beams of the ceiling need urgent repair. The chandelier hooks attached to the roof are empty because the trustees have taken them down from the unstable roof.
Bishwarup Dutta

“The kingdom of Awadh was set up in 1724 by Sadaat Khan at a time when the Mughal power was in decline. Wajid Ali was his successor,” said Subhas Chakraborty, a former professor of history at Presidency College.

Wajid Ali Shah had arrived in Garden Reach in 1856. “In 1857, when he was already in Calcutta, Wajid Ali Shah was put under arrest by the British because they feared he would become a rallying point for people with anti-British sentiments,” Chakraborty added.

The imambara has undergone minor repairs in the past but a repair to fix its structural weaknesses was never undertaken, the trustees said. 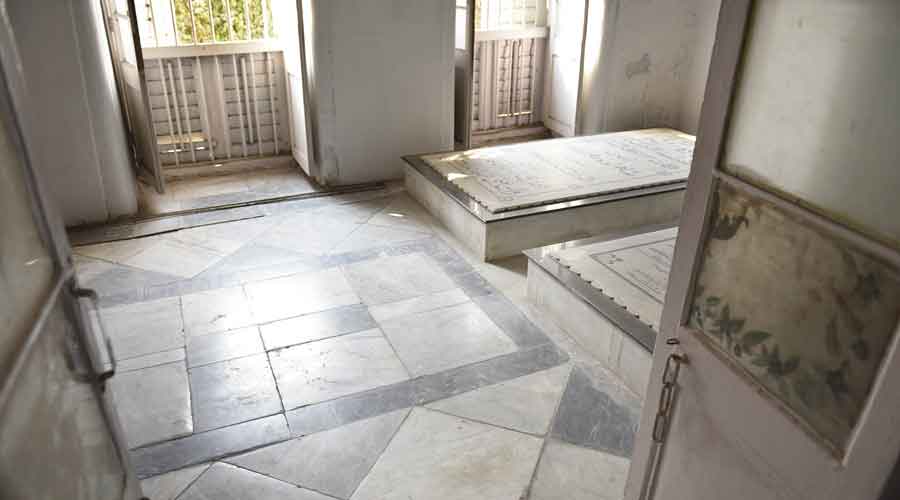 Graves of some the descendants of the Nawab
Bishwarup Dutta

As a measure to avert any accident, the trustees have fitted a net under the roof so that chunks from the roof do not fall and injure people underneath. Termites have eaten up the wooden beams and the terrace has become weak, they said. During monsoon, tarpaulin sheets are spread on the terrace to prevent water from leaking through the roof.

Engineers of the CMC said they have also discovered cracks in the wall and the foundation too needs to be strengthened as it has weakened because of lack of maintenance over the years.

“A heritage conservationist will be appointed as a consultant to do the work. It will be a retrofitting work without changing anything in the exteriors of the structure. We will only strengthen the condition of the building,” said a CMC official.

The consultant, likely to be hired by the end of March, will create a plan for the restoration and it will be supervised by the CMC.

“We received only one bidder in our first tender call. Rules say we cannot award the work if there is only one bidder. We have floated the second call and hopefully there will be more bidders for the work,” said the CMC official.

Shaikh Sohail, a heritage enthusiast who has taken several Calcuttans on tours of the imambara, said he was excited to hear about the restoration. “The imambara is among the few structures built by the Nawab at Garden Reach that has survived. Shahi Masjid, where he used to pray still stands but the palace, called Sultan Khana or Shahi Mahal, was demolished. There is also the Bait-ul-Nijat Imambara, built by Wajid Ali, which is also in bad shape,” he said.

The Sibtainabad Imambara is listed as a grade I heritage building according to CMC records.