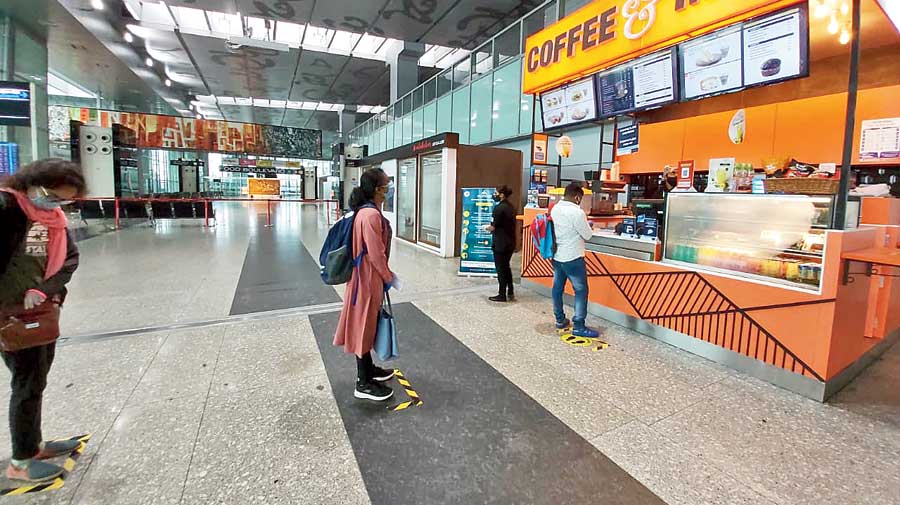 The city airport has decided to waive the rent on 100-odd outlets on its premises for April and May, when flights were stalled because of the Covid-19 pandemic.

Besides, the Airports Authority of India recently sent a communication to Calcutta airport, saying the rent would be reduced for June, July and August proportionate to the reduced passenger footfall compared with the previous year.

Airport officials said they had informed the retail, food and beverage and other agencies about the “concessionaire support scheme”.

“Rebate in licence fees will be given to the extent of reduction in passenger footfall from the corresponding period of previous year,” said an airport official. He said no bills would be raised for April and May, when there were no commercial flights.

The official said the passenger footfall was almost 70 per cent less in August than what it used to be before the Covid pandemic.The situation improved in September, on the days flights are operating between Calcutta and six cities — Delhi, Mumbai, Chennai, Ahmedabad, Pune and Nagpur.

The flights between Calcutta and the six cities had been suspended on July 6 because of a surge in Covid cases there. The services resumed on September 1 and currently flights on the six routes are operating three days a week.

There are 54 food and beverage outlets at Calcutta airport’s integrated terminal, of which 33 are operating. Of the 31 retail stores, 21 have reopened after domestic flights resumed in end-May. Airport officials said the retail and F&B stores in the international section were still closed because flights were yet to resume.

Metro had in July reported that several agencies, including the stores and the one running parking facilities at the airport, had sought rebates on rents. The city airport used to earn Rs 14 crore a month as licence fee.

Some of the agencies are opposed to calculating the rebate as a proportion of the reduction in passenger footfall.

“Now there are more passengers who are not coming on private vehicles. They take buses. So even if the passenger count has gone up compared with June, we are not getting enough business,” said said Babulal Yadav, general manager of Mahesh Sunny Enterprises, which runs the parking facility.

But airport officials said passenger footfall could be the only basis of calculation.

The Oberoi Group’s flight catering unit, although it does not pay a licence fee to the airport, is looking at resuming business. The unit had written to the Centre earlier, requesting the government to allow serving meals on board. Recently, the civil aviation ministry has given the go-ahead.

“We are preparing to serve meals on board from September 13. We are expecting a few orders from airlines,” said an official of the unit.