A tribute to Netaji 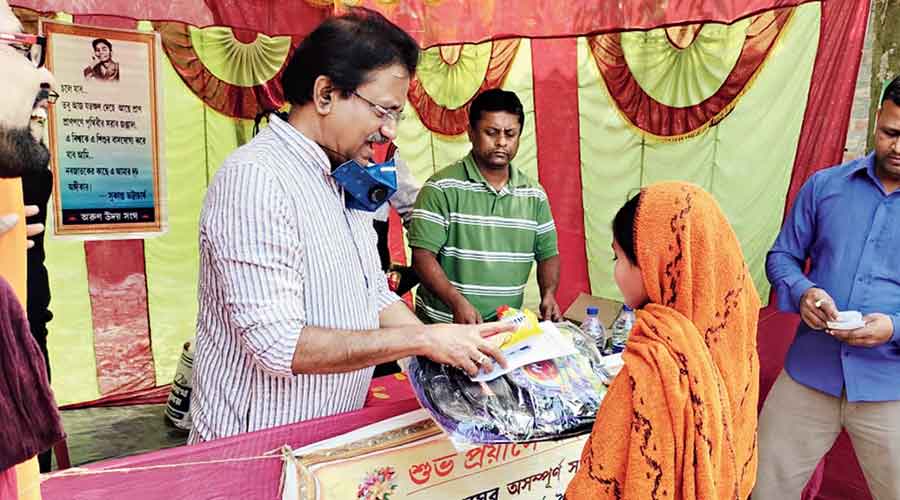 Rammohan Mission High School principal Sujoy Biswas hands over relief materials to a resident of Budhokhali village in the Sunderbans on Saturday
The Telegraph picture
Jhinuk Mazumdar   |   Calcutta   |   Published 25.01.21, 01:32 AM

Teachers of a city school travelled more than 80km carrying clothes and other relief materials that students had collected for villagers in the Sunderbans who are yet to recover from the impact of Cyclone Amphan.

Rammohan Mission High School chose the occasion of the 125th birth anniversary of Netaji Subhas Chandra Bose to travel to Budhokhali and Madhukhali, on the banks of the Matla.

“We reached out to 500 families with clothes, blankets, food, school bags and mosquito nets. The students contributed the clothes,” said Sujoy Biswas, the principal of the school who was accompanied by teachers and members of the management.

Biswas said it took them more than two hours to cross the last 30km because of poor roads. “We chose these two villages because we wanted to travel to remote areas,” said Biswas.

The villages were devastated by Amphan, which struck in May last year, and the residents are yet to get back their normal sources of livelihood.

“The villagers said Amphan had left their ponds and farmland inundated with saline water, which impacted their source of livelihood. They could not harvest from June to August," said Biswas.

Metro had reported in May how the rising salinity in water would put many people out of work in the Sunderbans in the aftermath of Cyclone Amphan.

“We don’t know about these two villages (Budhokhali and Madhukhali), but there are areas in the Sunderbans where farmland has been damaged following inundation by saline water. The water evaporated and the salt mixed with the soil,” said Sankar Halder, the founder of Mukti, an NGO that works in around 15 blocks in the Sunderbans.

The crisis has left many of the villagers without livelihood and the pandemic has only aggravated their problems.

Biswas said the idea of choosing the occasion of Netaji's birth anniversary to stand by the villagers is to drive home the message of doing responsible work to mark important days.

“Students need to know that the day is to be marked not just by hoisting the national flag, but also by reaching out to people who need them,” he said.