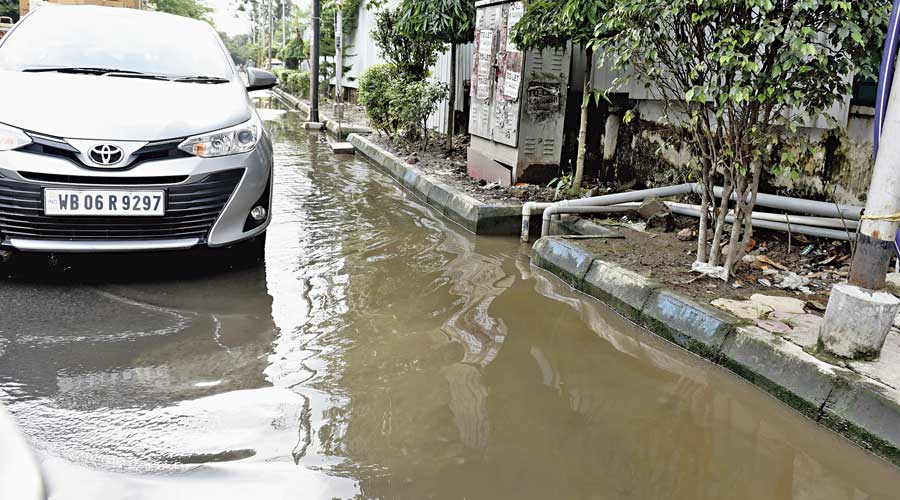 Large parts of Mukundapur and New Garia go under water several times every monsoon and civic officials blame it on the lack of a proper drainage network in the area.

There is no underground drainage network in many parts on the south-eastern fringes of Calcutta that have some of the city’s largest private hospitals, where thousands of patients turn up every day. The place, with a population of around 50,000, is also dotted with large housing complexes, apartment blocks and standalone buildings.

Rainwater from the area flows into kuccha drains, said a civic official. The drainage system of Mukundapur and New Garia is dependent on canals flowing through the area, he said.

An underground drainage network with pumps fitted to drain out water is required in the area. However, civic officials said there is no plan yet to build any new underground sewer infrastructure.

The Calcutta Municipal Corporation (CMC) has approved building plans for many housing complexes and standalone buildings without ensuring proper drainage infrastructure for them.

Residents allege they have got an unfair deal.

“We pay taxes to the CMC but are treated like second-class citizens. The drinking water supply is poor, roads are bad and waterlogging is a perennial problem. I have been living here for over a decade. The situation has only worsened over the years,” said Boby Banerjee, a resident of Nayabad.

“When we started living here, there were many vacant plots. The rainwater would flow down into those plots. But as new buildings were built there, the water has no place to go and roads get waterlogged,” she said.

The neighbourhood has hospitals like the RN Tagore International Institute of Cardiac Sciences, AMRI Mukundapur, Medica Superspecialty Hospital and Peerless Hospital, among others. Large housing complexes like Upohar, Utalika and Avidipta are located in the area.

New housing complexes of similar scale are coming up. But all this without ramping up the drainage infrastructure of the place.

“This water gets evaporated or absorbed underground over days, which is why the place remains waterlogged for many hours even after it stops raining,” said a civic official.

Residents of the area also alleged that unscientific and indiscriminate road construction have aggravated the problem.

“The CMC has laid layers of bitumen over previously laid layers to fix potholes and craters. The old layers were never scraped off. As a result, the level of the road has become higher than the ground floor of many homes and water enters the ground-floor rooms of these houses even after a small and intense spell of rain,” said a resident.

The pump covers only about 50 per cent of the area and the rest still depends on open drains for their drainage. The sewage going to the drainage pumping station is drained out into the canals using pumps.

“Over the last 10 years, no new sewer infrastructure has been built in the area. There is no plan right now to expand the underground sewer network in Mukundapur either,” said a senior CMC official.

Civic officials said there are two ways of allowing construction of buildings in a place that is rapidly urbanising — either the government decides to build all necessary infrastructure and then allows buildings to be constructed or sets up infrastructure as new buildings come up.

“In the case of Mukundapur and adjoining areas, the state government and the civic authorities decided that it will build infrastructure as more people start living here. They did not want to invest crores of rupees before people moved in,” said the CMC official.