Balcony of house on College Street collapses, prompting fears of more such incidents during monsoons 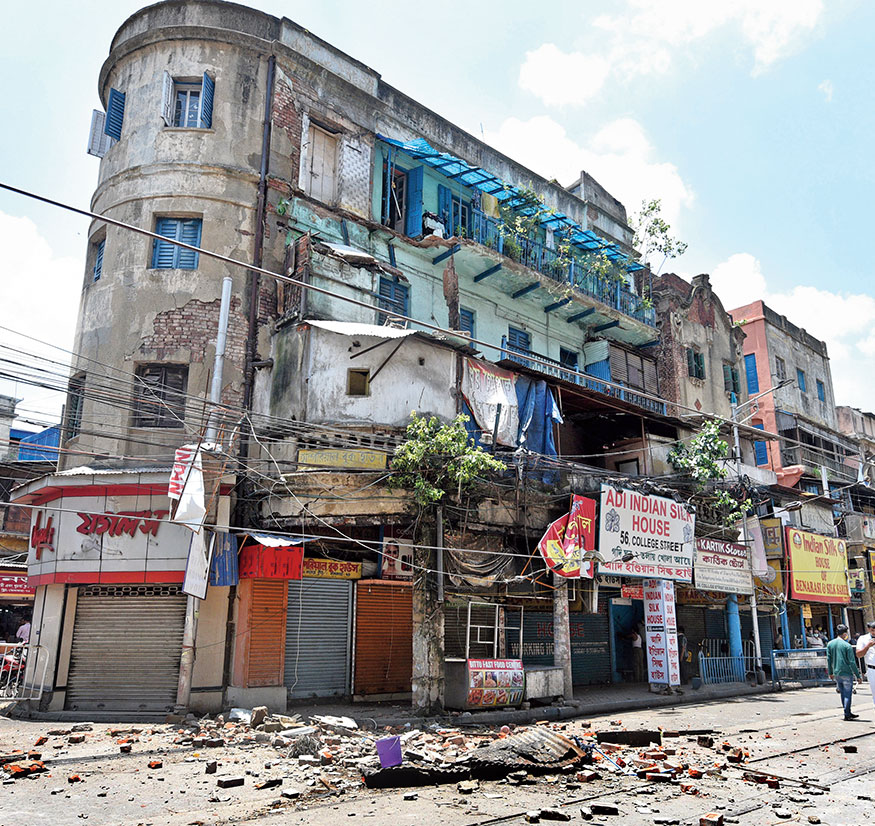 Three persons were injured when a portion of the third-floor balcony of a house on College Street collapsed on Friday morning.

The four-storey house, more than a century old, stands near the intersection of College Street and MG Road, right opposite the Barnaparichay Market Complex.

A Calcutta Municipal Corporation official said the civic body had pasted a “dangerous building” tag on the house a couple of years ago but residents and owners of shops in the building allegedly removed it.

Calcutta has over 2,500 dilapidated houses, according to the CMC. The civic body had feared Cyclone Amphan would damage many of them but there was no large-scale cave-in. An architect cautioned that the rain, not winds, might have made many of these structures more vulnerable. More such cave-ins are feared during the monsoon.

“A portion of the balcony (of the College Street building) caved in a little before 9am. Two men and a woman were injured and taken to hospital,” said an officer of Amherst Street police station.

The injured were two plumbers and a woman, who lived in the house. The plumbers were on the balcony during the cave-in.

The plumbers — Raghu Mahapatra, 38, and Jaladhar Singh, 47 — were taken to the NRS Medical College and Hospital. The woman, Biva Gambhir, 50, was taken to a nursing home.

Teams from the civic body and the fire department reached the spot after the cave-in. A firefighter said five persons were evacuated from the second and third floors.

“Three of the evacuated persons were over 70,” said a firefighter. The residents of the house were taken to a temporary shelter, said sources in the civic body.

The ground floor of the building houses sari shops and other business establishments. The upper floors have godowns and residential units.

“The entire structure is dilapidated. It is sheer luck that only a 6ftX8ft portion of the balcony crashed,” said a civic engineer.

“A couple of years ago, we had pasted a ‘dangerous building’ notice on the structure and asked the residents and traders to shift elsewhere. But the notice soon disappeared.”

A man sitting outside his Shibpur home was shot by a motorcycle-borne person who fired one round and fled on Friday evening. The victim was identified as Mohammad Akbar Ansari.