At rally: ‘all who oppose BJP regime are anti-nationals’ 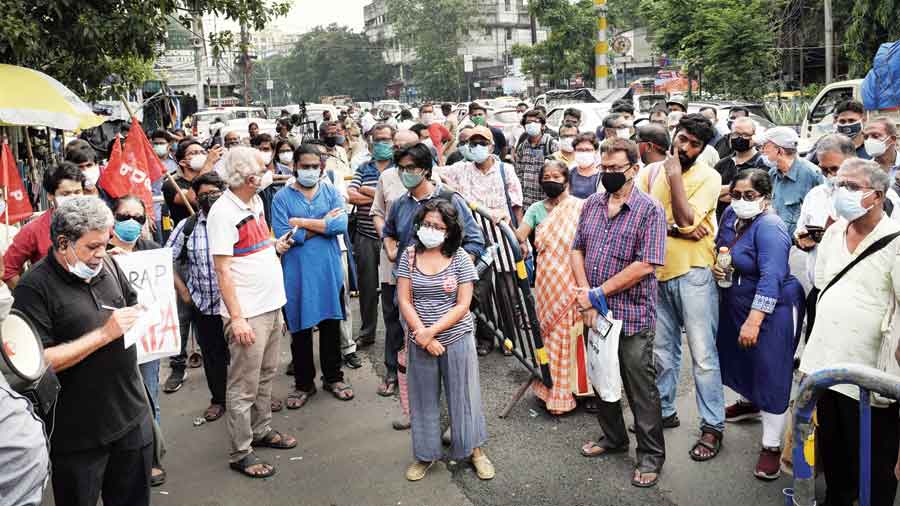 The demonstration by Bengal against Fascist RSS-BJP at the Moulali crossing on Tuesday.
Bishwarup Dutta
Debraj Mitra   |   Calcutta   |   Published 07.07.21, 01:06 AM

A rally in memory of Father Stan Swamy in Calcutta on Tuesday expressed “more rage than grief” at what speaker after speaker called a “planned institutional murder by the State”.

The Jesuit priest and tribal rights activist, severely ill and at 84 the eldest prisoner in a case in which rights activists stand accused of having Maoist links, passed away in a Mumbai hospital on Monday while waiting for bail.

The rally, called by the Bengal against Fascist RSS-BJP, was initially planned as a march from Moulali to Esplanade. But police refused permission citing Covid-19 norms, forcing the organisers to stage a demonstration at the Moulali intersection, on a slice of CIT Road cordoned off by the cops.

“Swamy was an anti-national. All others opposed to the policies of the BJP regime are indeed anti-nationals,” said Anirban Banerjee, one of the speakers.

“Stan Swamy was arrested in October last year in Ranchi. He suffered from Parkinson’s disease. His health continued to deteriorate in jail. But he received little sympathy from the authorities. Basic human rights were dumped in garbage in Stan Swamy’s case, in clear violation of international norms,” said rights activist Sujato Bhadra.

Binayak Sen, a doctor and rights activist who spent more than three years in jail on the charge of having Maoist links, was among those who attended the rally.

The assembly observed a minutes’ silence in memory of the priest, after which one of his messages was read out.

“I would just add that what is happening to me is not unique. Many activists, lawyers, writers, journalists, student leaders, poets, intellectuals and others who stand for the rights of adivasis, Dalits and the marginalised and express their dissent to the ruling powers of the country are being targeted,” Father Swamy had said in the message.

Mahasweta Samaddar, a convener of the forum, said Stan Swamy was part of a “freedom struggle”.

“He was part of the freedom struggle to ensure freedom for all sections of people of the country. His arrest and the treatment meted out to him is an attempt by the State to instil a sense of fear among people like us, protesters who are out of jail,” she said.